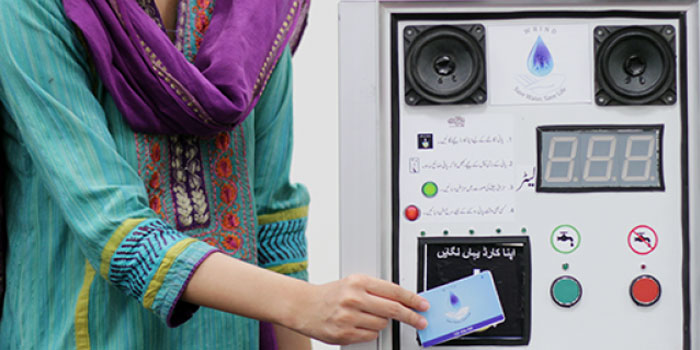 Thirsty? Soon, you could be getting clean water from a solar powered ATM through the use of a smart card. The innovative solution is set to be launched in Punjab very soon.

Physically, the machine is quite similar to an ATM. Occupying a space of two square feet, it can be used to claim a daily share of clean water through the use of a smart card.

It’s a prototype borne of the collaboration between Punjab Saaf Pani Company and the Innovations for Poverty Alleviation Lab (IPAL), a research center in Lahore. The water ATM is all set to be installed alongside water filtration plants in rural areas and the outskirts of major urban areas in Punjab.

The machine is designed to help the government cut water waste and ensure people have access to clean water. The innovative machines will help the government maintain a record of the exact quantity of clean drinking water being dispensed in a day in a specific locality, besides ensuring its quality. The quality and quantity of water being dispensed will be tracked in real time online through a central server.

The way the machine works is pretty simple. An audio message is played every time an ATM card is authenticated, you get two buttons for starting and stopping the flow of water and sensors keep a track of how much water has been dispensed and how much remains.

The first phase of the project will see Bahawalpur, Faisalabad and Rajanpur being fitted with water ATMs. These districts in Punjab are particularly known for water contamination issues. Per family, 30 liters of drinkable water will be available on a daily basis.

The project was born out of a need for clean water for the masses. According to the Punjab Saaf Pani Company, in Punjab, which houses 98 million people:

Things don’t look better when you take the whole country into account. According to Pakistan’s national drinking water policy, 35% of the country’s population doesn’t have access to safe drinking water. Estimates for the diseases related to poor water sanitation and hygiene cost the economy over 112 billion every year.

Keeping in mind the magnitude of the situation at hand, Punjab government has allocated 20 billion rupees to provide clean water to the people. The clean drinking water project aims to provide more than 35 million people with water in 2 years.

It’s one of the top priorities of the provincial government, to ensure provision of clean drinking water in each locality, as access to clean water is a fundamental human right. The clean water will be provided free of cost but beneficiary communities will pool money each month to pay for maintenance of the ATMs and filtration plants.

Water wastage is a huge issue and systems such as the water ATM, which is already being implemented in neighboring India, are critical to making sure we manage our resources properly.

According to Nazir Ahmed Wattoo, an environmental expert with the Punjab Organisation for Social Welfare, the real test will be whether the water dispensing centers are maintained and effectively monitored. He added that Pakistan needed to build new water reservoirs as well since the current water storage capacity is at 30 days, one fourth of what is needed.