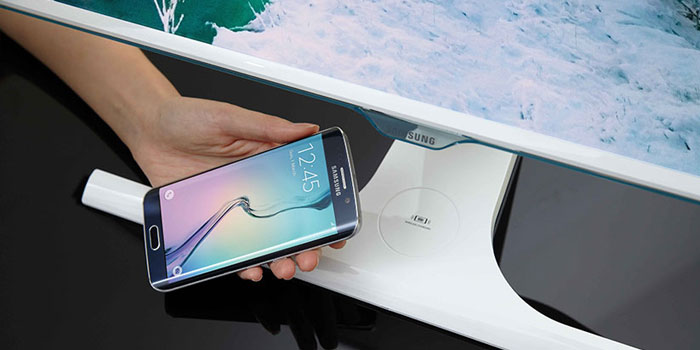 While a handful of Smartphones nowadays come with wireless charging as an option, the idea remains relatively niche, owing to its cost, less acceptance and speed.

But will that stop Samsung from building in a wireless charger on the base of its new monitor, the SE370. Samsung’s own current flagship phones, the Galaxy S6/S6 Edge come with the feature built-in so there is some dots being connected there.

Theoretically though, every phone with the Qi wireless charging standard could be charged with the monitor. The standard is the most prevalent in smartphone devices currently, as is used by manufacturers varying from the Lumia 1020 to the Yotaphone 2.

Other than that, the monitor just about covers the bases. It will be available in two sizes: 23 and 27 inch. It is a PLS (Plane-to-Line Switching) panel for a better experience and brightness levels of up to 300 cd/m2. Viewing angles stand at an impressive 178 degrees.

The resolution of the display is set at 1080p Full HD. It makes use of AMD’s FreeSync which works with AMD graphic cards to improve input latency, as well as reduce stutter and obtain a response time of just 4ms.

The Eco Saving Plus mode reduces brightness up to ten-percent less energy usage while an Eye Saver mode protects the users’ eyes from harmful blue light. The design is also stylish and decidedly good-looking, with just a white version being announced for now featuring less bezels and a slim waistline.

No word is out on the pricing or availability yet. Though, since it’s only 1080p, it might be cheaper than you think. The monitor can do wonders for you if you want to reduce clutter on your work desk or just plain hate wires. It is yet another small step towards making wireless charging accessible.