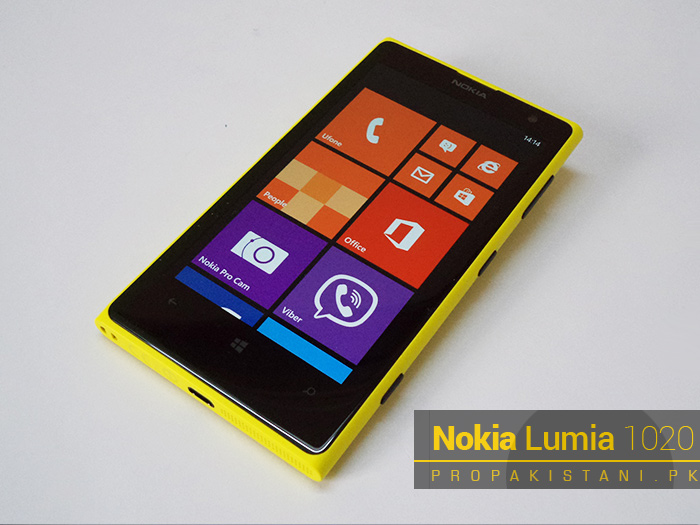 Last year Nokia introduced Lumia 1020, the 41MP smartphone. As usual it took a while for this phone to reach Pakistan and in our hands. Finally we had a chance to see the Lumia 1020 in person to prepare a short review for you guys.

Let’s get straight to the un-boxing first.

Lumia 1020 takes most of its design inspiration from Lumia 920, though it has a very distinguishable back. Lumia 1020 has the same polycarbonate unibody design that comes in a range colours including yellow, black and white. 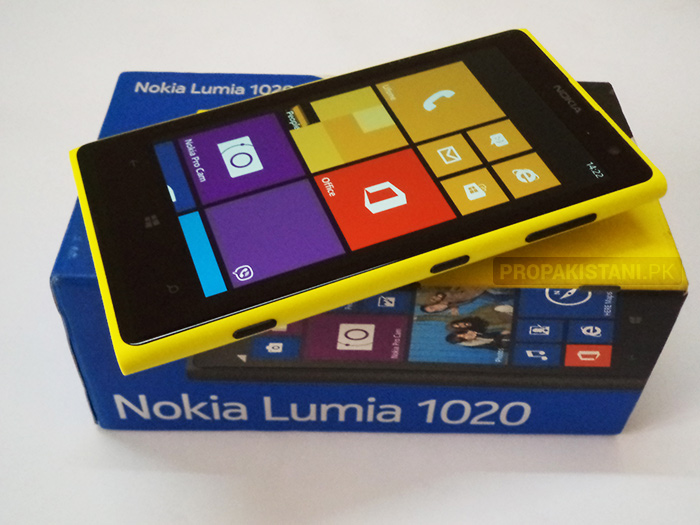 The front side features a 4.5-inch display which has resolution of 768×1280. The ear speaker, Sensors and the front facing camera are embedded in the screen.

The capacitive touch screen is highly sensitive and you can use it with gloves on your hands. Left side of Lumia 1020 remains empty as all the buttons, which include volume rocker, power/unlock and camera key, are placed on the right side. 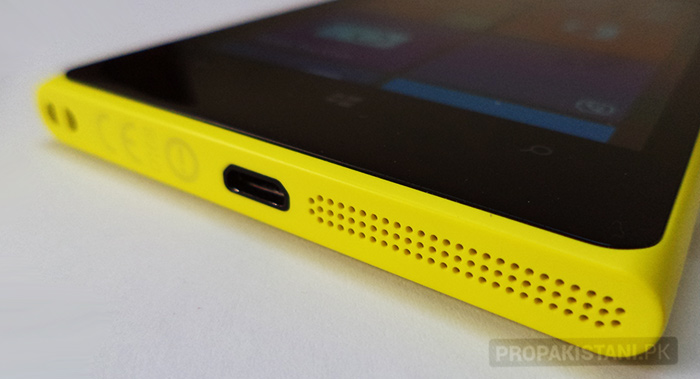 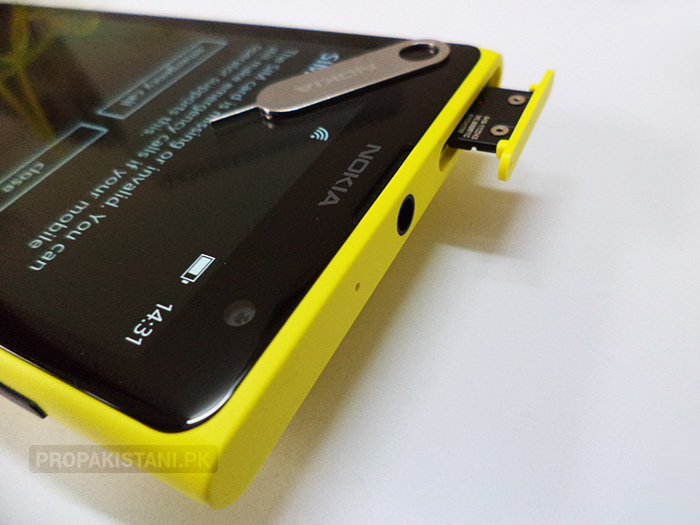 The back of the phone is the most noticeable and sets apart Lumia 1020 from the rest of Lumia smartphones. It features the 41-megapixel sensor with Xenon and LED flash lights. 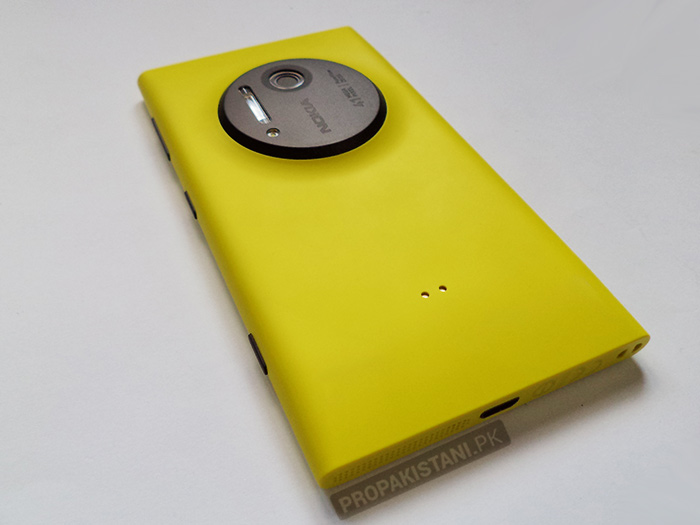 Surely the hump on back doesn’t look good but it was unavoidable, besides it helps keep you a good grip. The camera is located on the top, so the upper part is a little heavier and when placed on a table or flat surface it will sit at an angle. Though in pocket the hump won’t be noticeable.

Other than the Camera, you will find Wireless charging connectors on the back.

The overall design of this phone isn’t impressive but it isn’t too bad either. It’s not too big or heavy to carry, fits in your pocket easily.

Not to mention that to have a phone with best camera you will surely have to make some compromise on the size and thickness.

Like all other Nokia Lumia devices, 1020 runs Windows Phone operating system. The device comes with Lumia Amber out of box, but now you can update it to Lumia Black. It isn’t a major upgrade but brings many new features and improvements to the Camera app. 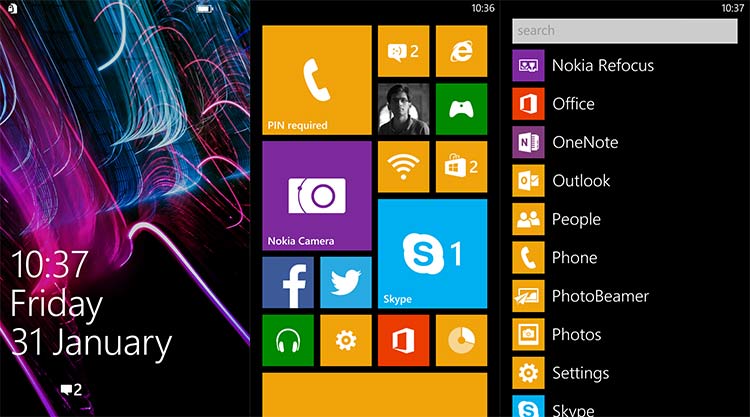 If you aren’t familiar with the Windows Phone OS, it’s nothing like Android or iOS. The home screen is filled with a number of live tiles, which can be moved, removed and re-sized by holding down on them.

Swipe to left and you have all the apps – you can also use the search function if you have installed many of them. There isn’t any notifications drawer and you can’t customize the phone, except changing its colors.

The Lumia Black brings some new features to this device, including the ability to put applications in folders, FM Radio, Glance Screen 2.0, which shows quick information like time, notifications and battery details when the phone is on standby.

Lumia Black includes several improvements in the camera department as well as many enhancements from Microsoft including driving mode, customized ringtones for contacts, screen rotation lock and ability to close apps within the multitasking view. 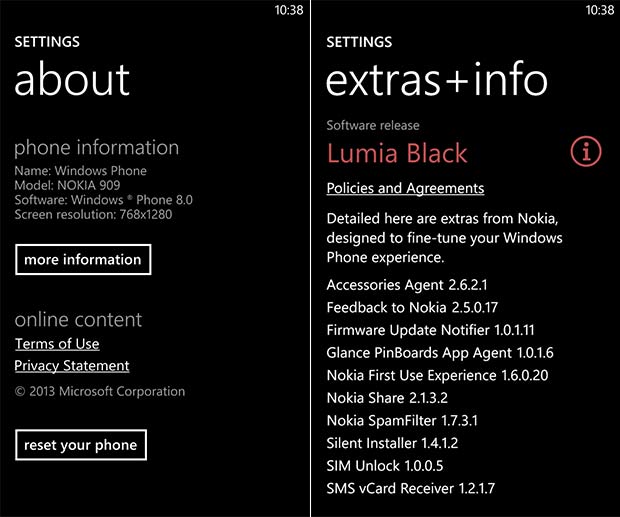 Most of the popular apps and games are now available for Windows Phone 8 platform but these are not as good as compared to other platforms. Moreover, the good apps and titles aren’t free.

Windows Phone OS has a major advantage over others in terms of performance. Packed with a Dual Core processor and 2GB of RAM, this phone runs seamlessly. You won’t experience any lag, unless you are loading some heavy games or using the Camera; as it takes enough time to process the full res and down sampled image.

The most spectacular feature of Lumia 1020 is its camera. The camera module is so large that it’s the first thing you will notice when you see this device.

The 41-megapixel sensor is equipped with both Xenon and LED flash lights. The sensor size is 1/1.5″ and it has a wide F/2.2 aperture as compared to other smartphones. 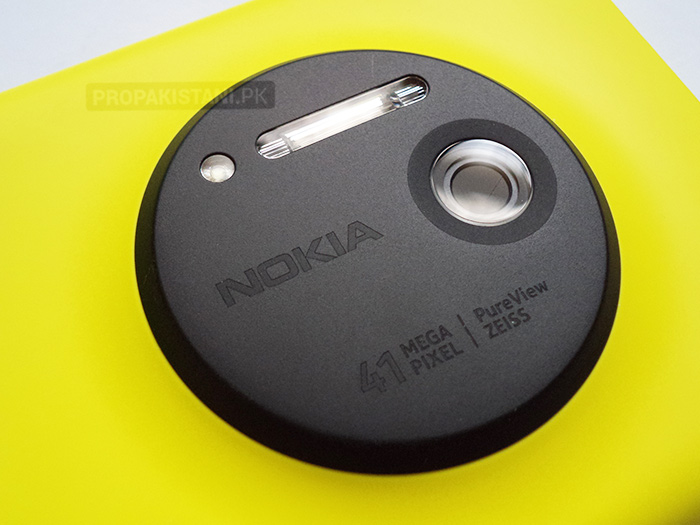 You won’t be shooting 41-megapixel photos with the camera, as it takes a maximum of 38-megapixel photo (4:3 aspect ratio, 34-megapixel with 16:9) and then shows you an oversampled version of 5-megapixel.

With the help of software you can always re-frame the 5-megapixel image. That means you can zoom in or out after you have taken the photo and the quality won’t be affected much. 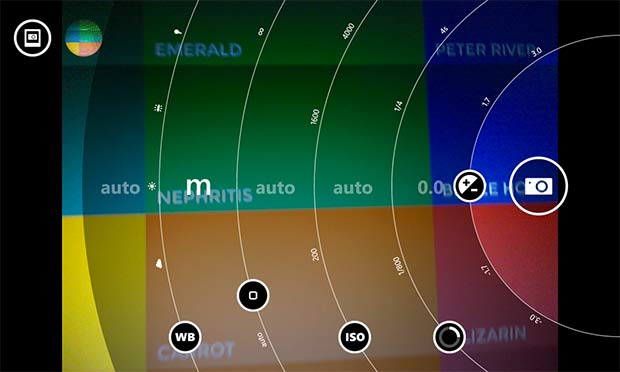 The Nokia Camera application, which is amalgamation of Nokia Pro Camera and Smart Camera, offers some nifty features giving you much control over the whole photography process.

The ring based interface lets you customize, white balance, focus, ISO, shutter speed and exposure or you can just take a photo with auto settings. The image quality on Lumia 1020 is the best among all other smartphones. Photos are well exposed and with clear and sharp details.

You can also record 1080p videos at 30fps and zoom up to 4x. While recording 720p videos you can zoom up to 6x. The Optical image stabilization and Rich audio recording features make the video distortion free.

While recording videos you get settings for flash, white balance and focus. You can either set focus manually or use the continuous auto-focus option. 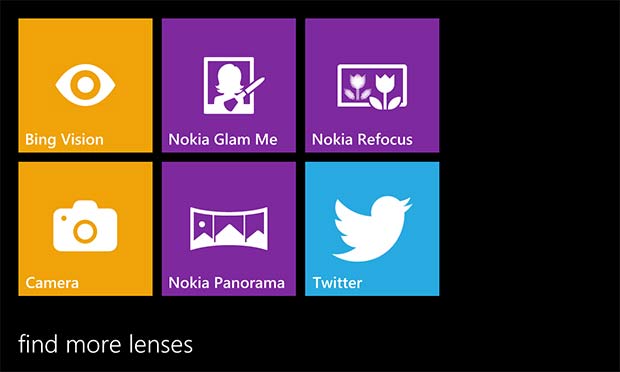 You can also use lenses or camera apps to enhance you photos. For example the Nokia refocus application lets you focus on different objects after you taken a shot.

The only drawback of Lumia 1020’s camera is the image processing time. It takes as much as 5 seconds to process a single image, as it has to save two copies of each image.

Check below sample images shot by Lumia 1020. Click on the images to view the original size and quality:

Lumia 1020 is powered by 2000mAh battery, which honestly isn’t enough to power this beast. If you don’t play games or use internet/social apps and take a few photos you will easily get a day. But for power users the battery will last only for a few hours.

The low battery timing has always been an issue on Lumia devices and sadly Nokia hasn’t fixed it yet.

Lumia 1020 is probably the best camera phone in the market. It isn’t actually a replacement for you DSLR, but still it offers great performance and has a compact size.

I am not a big fan of Windows Phone OS but I will have to admit that Windows Phone OS is improving. The phone is somehow a little ugly but the premium and durable build quality combined with the best camera makes it a sweet deal. 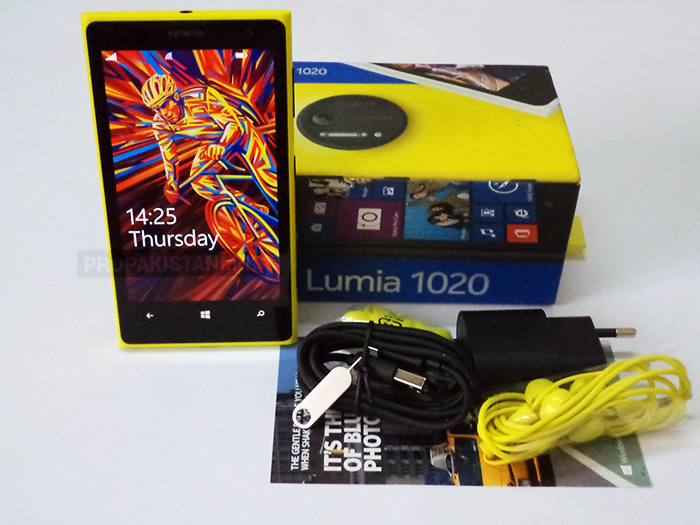 If you are looking for the best Camera phone and have the budget, Lumia 1020 is what you need.