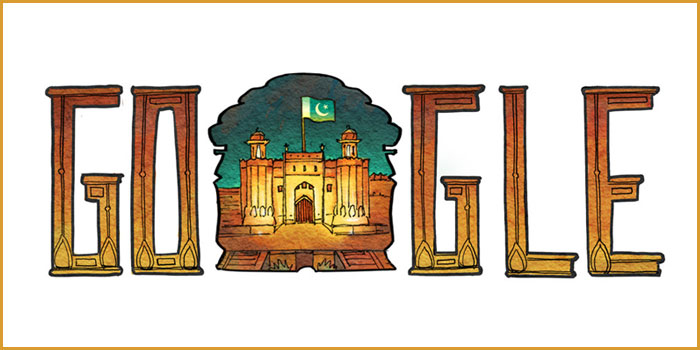 Carrying its tradition of changing its logo into a custom-made doodle, Google has marked the occasion of Pakistan’s 68th Independence Day by opting to do the same once again.

The new Google doodle, which will remain the logo of the Mountain View firm until the 15th is based on the Alamgiri Gate of thee famous Shahi Qila, or the Lahore Fort, located in the second largest city of Pakistan. The choice isn’t so puzzling since the UNESCO World Heritage Site is not only one of the most instantly recognizable in the country, but also one of its oldest.

The doodle, while not as flashy as the 2012 version, or as eye-catching as last year certainly goes after the details on this year’s iteration. Look closely, for instance, on letters other than the second ‘O’ and you’ll see some patterns appearing over there. And how about the boundaries of the second ‘O’ in Google, depicting the Alamgiri Gate.

Here is the description of the doodle from the maker itself:

And here is how Robinson Wood progressed towards the final version of the doodle while passing on a few along the way:

Worth noting here is how beautifully the various times of the day are reflected in all three doodles. The end result is this marvelous creation which will likely be remembered for some time.