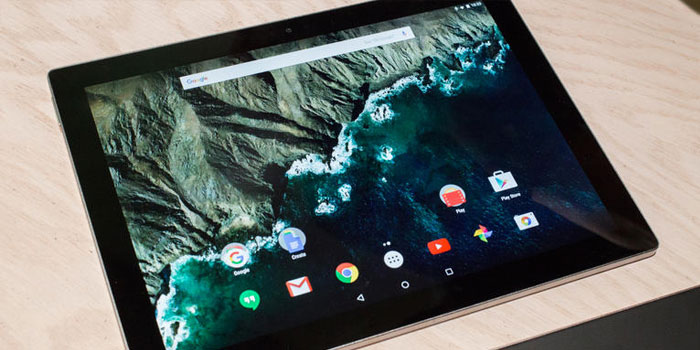 Following the footsteps of Apple and Microsoft, Google has jumped aboard the professional tablet market with its new Pixel C. However, it instead runs on Android, rather than Chromebook OS and is the first Pixel device to go this route.

The Pixel C comes with a 10.2” display at the front with 2,560 x 1,800 resolution for 308ppi. It has a 500 nit brightness level and sRGB color gamut. The design is quite premium with a brushed metal finish. Running somewhere there is Android 6.0 Marshmallow.

Under the hood, we get the Nvidia Tegra X1 processor, finally, with quad-core CPU. Accompanying it is 3 GB RAM and either 32 or 64 GB internal storage.

Apart from that you get the “usual” USB type-C from the Nexus phones for fast charging. These new gadgets may play an instrumental role in the popularizing of the technology in the coming few months.

There is a detachable accessory here which works as a stand or slides down to transform into a seamless gadget. It can be varied between 100 and 135 degrees. It connects via Bluetooth and gets charged by the tablet itself. No styluses here, though.

Price? The Pixel C starts at $499 for the 32 GB variant, or $599 for the 64 GB version. The Bluetooth keyboard costs $149. Not many people think of Android as an alternative at work, but at least in the Android market, it is difficult to think of any other serious alternative. The Surface 3 and even the iPad Pro are bound to give it a tough time, however.

It will be available later this year, in case you’re serious.