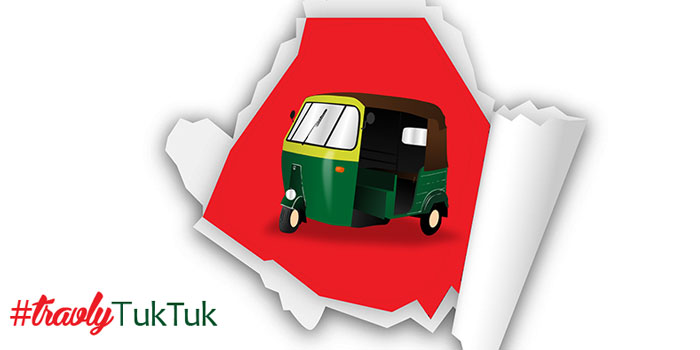 Good public transport isn’t something you usually associate with Pakistan. Even with the recent Metro projects in major cities in the country, our transport infrastructure is still woefully unprepared for the surge in automobiles and population. Even concerted efforts will take time to address the issues so in the mean time, all that can be done is making sure we are making the most efficient use of our time and resources.

That’s where Travly comes in. The aim of this startup is to empower commuters and to increase the reach of urban transport by spreading information about public transport. It was already well on its way to becoming an information hub but now, it has taken on a far more ambitious route: becoming the Uber of Pakistan.

Starting with Rickshaw services in limited parts of Lahore, Travly aims to ultimately bring cabs, cargo and other modes of transportation across Pakistan

Getting to this point has been part of an evolution process. Travly launched back in 2013 when it was incubated at Plan9, Pakistan’s largest tech invubator. Localized to Lahore, it allowed travelers to plan a route from given a point to another using only the bus system. Later, Travly joined the PlanX tech accelerator. It was there that the startup collaborated with the Lahore Transport Company (LTC) to digitize the bus routes of entire city of Lahore.

Now, it’s all set to introduce Tuk Tuk (Rickshaw) services in Lahore starting from today. Much like a certain Uber, users will be able to get rickshaws at their doorsteps at the click of a button. It is not going to be limited to just that though.

We are not just restricted to a single mode of transportation. We have plans to integrate local cabs and even cargo services in Travly. Right now we are collaborating with rickshaw owners and in our soft-launch, we will launch this service in select areas.

With services like these, it’s all about aggressive expansion. It’s a market segment where being first means nothing if you can’t get people using it fast enough. That’s why Travly plans to expand operations in Lahore for three months and then head towards Islamabad and Karachi.

A very important point when it comes to Pakistan is safety. We’ve all seen Uber under fire for incidents with drivers and any service that tries to replicate the model needs to deal with it better than they usually do.

What’s the vetting process? How would you handle complaints? Those are the the questions we put to Shahmir.

That’s a great question because these kinds of things can cause issues for any transport related startup or even well established companies like Uber as you said.

Vetting them has always been our priority because our users need to be kept safe. We started meeting them a few months ago and we have collected a lot of data on each of our drivers.

We have their License plate numbers, vehicle registration, ID Card, License Number and during the interviews we have also done background checks to ensure that we provide the best and safe and most affordable transportation services in the country.

Travly will monetize their services by deducting a small percentage of all fares. Speaking more about pricing strategy, Shahmir says:

As we interviewed over 500 rickshaw drivers, we have deducted a median rates that all our drivers have agreed to however that will be based on market dynamics. Rates will go up in the winters as LPG rates go up. They will also be effected by time on which the booking was made.

That is, if someone wants a rickshaw at 3:00 am then the rates would be significantly higher than that of the day time and also we would prefer to give discounted rates by using rickshaw drivers heading back to their home adda [sic].

So all in all we are trying to benefit both the rickshaw community and rickshaw users.

Pakistanis are a thrifty bunch so of course pricing matters. Thankfully, Travly is well aware of that fact.

We understand that the users that we are targeting are cost-conscious so we will provide them with really affordable pricing. It’s not just a mobile app, users will be able to use our services via a web app and on-call as well.

All in all, Travly’s Tuk Tuk service is exciting. There has been talk of an Uber for Pakistan for a while now but we haven’t seen much action apart from this team of six which also includes Faisal Sherjan, an industry veteran who has co-founded Patari and BookMe while serving as a Chief Strategy Officer for many more.

Travly also adds to the growing list of automobile related startups in Pakistan. Contrary to most startups that focus on volume and then revenues, the likes of AutoGenie and others have a monetization strategy from the very start and that’s something you don’t see often enough.

We wish the team at Travly the best of luck and eagerly await the launch of their services in Islamabad!