Federal Investigation Agency’s cyber crime wing, NR3C yesterday arrested a gang of three youngsters from Rawalpindi for hacking Facebook accounts of more than 80 females from across Pakistan and abroad.

A statement issued by the agency said that all three are remanded into custody of FIA for three days for the investigation.

Reportedly the gang, namely Bilal Hussain, Zulqurnain and Javed, belong to Sargodha while they were arrested from Sadiqabad area of Rawalpindi.

Gang had hacked more than 80 accounts, mainly of females, and had targeted the victims by sexually harassing them or blackmailing them otherwise.

Bilal, the main suspect, confessed that he, along with his mates, had hacked several dozen accounts of girls from Pakistan and India. They confessed that they had learned Facebook account hacking from internet. 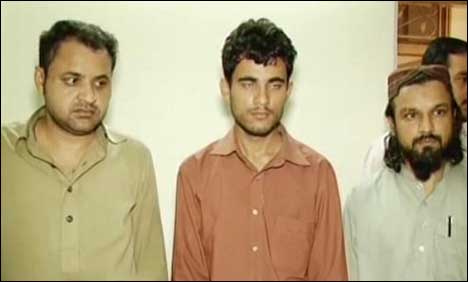 Bilal Hussain, Zulqurnain and Javed after they were arrested by FIA for Hacking Facebook Accounts

Zulqurnain, another suspect who is in FIA’s custody now, reportedly ran an illegal internet cafe.

It merits mentioning here that there are no cyber laws in the country, however, such cases are dealt with conventional sections from Pakistan Penal Code.

NR3C, however, is available to for any complaints and they can be accessed through nr3c.gov.pk. Anyone can register complaint with NR3C by simply emailing them with the details.