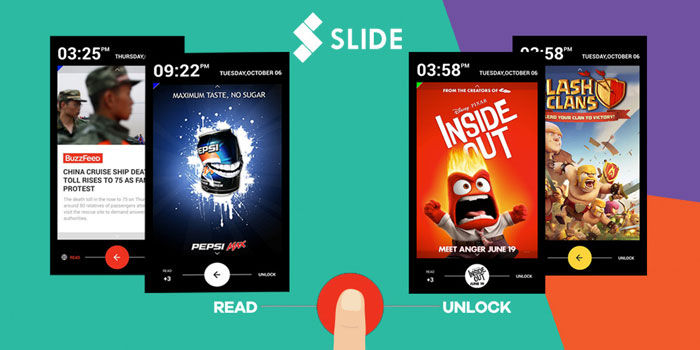 The average person unlocks their Smartphones over 100 times a day. What if you could work towards earning something tangible each time you did that? That’s the premise behind Slide, a new lockscreen app for Android smartphones. The brainchild of Junaid Malik, former COO of Bramerz, Slide was launched at an event held earlier in Lahore today.

The way it works is this: after linking your Facebook account, you select what topics interest you, enter a few details and that’s it. Now every time you unlock your screen, you’d see tailored content and the option to browse through and read it (and of course the option to unlock the phone).

Each time you read an article or unlock your screen, you get points which can be redeemed for goodies. Plenty of publishers like BuzzFeed, Daily Mail and even ProPakistani are partnered with Slide so there is no shortage of engaging content. Right now, you can only redeem points for Mobile top ups but users will soon be able to avail discounts at their favorite clothing stores, get free movie tickets and much more.

While the idea for a rewards based lock screen app is not new, Slide is definitely one of the first ones that have tailored their product for the Pakistani market. Considering how much time the average person spends on their phones and the rising share of Smartphone users in the 129 million mobile subscribers in the country, the idea behind Slide makes a lot of sense.

For example, right now Slide seems to be partnering with publishers for free. More traffic is always good so you won’t see any of them complaining. However, it’s paying very real rewards to its users. That has to come out of somewhere and I feel like once enough traffic starts being generated, they’ll start charging publishers for appearing on the lockscreen. If that happens, it removes all incentive on the publishers part and eliminates the very content that users have become accustomed to.

Or maybe the team behind Slide is smarter and have another solution which we haven’t seen yet. Regardless, it’s a nifty little app that would pay out 100 rupees in mobile balance once a month if you use average mobile unlocking statistics. Considering you’re doing it anyways, we’d say it’s well worth it. After all, there is nothing Pakistanis like more than free stuff.

You can download the Slide app for Android smartphone from here