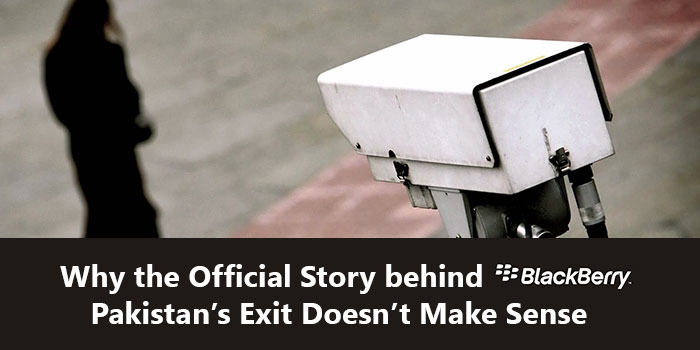 So it has finally happened. Following government directives, BlackBerry has exited Pakistan, leaving behind a minor yet vocal user base fuming.

But there are a lot of unanswered questions here. Theories abound as to how BlackBerry was ‘kicked out’ of Pakistan or how BlackBerry didn’t think that the ‘limited’ business customers here justified its presence.

Let’s take a look at some facts here.

In today’s security-obsessed world, many countries have taken measures (draconian and otherwise) to curb the use of encrypted communication services.  After the Peshawar APS attacks, we witnessed how mobile operators had to carry out a more stringent process of biometric verification to weed out bogus mobile SIM registrations. Statistically, as per media reports, more than 27.5 million SIMs were blocked during the process.

BlackBerry was, of course, asked to allow access to its encrypted servers. The company declined and summarily released a statement detailing its ‘moral high ground’ in not folding to government pressure.

If BB’s response sounds like corporate hogwash to you, that’s because it is. And here’s why.

Pakistan wasn’t the only country that asked BlackBerry to comply or else. Here are some other examples.

How Did BlackBerry Allow Data Access to These Governments?

There are theories that detail how the governments of those other countries and BlackBerry reached a ‘compromise.’

The most technical explanation is that BlackBerry allowed the government to use an ‘encryption key’ in limited cases. This key could give governments access to confidential conversations. Since BlackBerry houses its servers in Canada, governments couldn’t raid and access it.

Here’s another theory. They didn’t allow access. The governments, facing a public backlash from all the corporate businesses in their countries, silently dropped the demand for the ban. Here, the economy basically trumped security.

Do These Things Apply To Pakistan?

In Pakistan’s case, where the national exchequer has reserves of $17 billion approximately, the business pressure argument doesn’t hold much water. It is safe to assume that the security aspect came into play.

However, knowing how Pakistan’s official machinery works when it comes to technology, there is more to this story. The mismanagement of YouTube issue is a case at point, where other governments have seen their requests honored by Google, in Pakistan they denied similar treatment and resultantly they are blocked here.

Did something similar happen with Government-BlackBerry negotiations regarding a compromise agreement? Your guess is as good as mine.

The debate between security and liberty is a delicate one, but every country has its own unique challenges that ensure that there’s no clear-cut answer to this debate.

Pakistan’s terrorism problem needed drastic measures, and the powers-that-be decreed that our version of the Patriot Act was the need of the hour. Hence the BlackBerry fiasco.

But the real question is that why Blackberry announced its exit today by saying that it can’t fulfill Pakistan’s demands, when the general perception is that it’s kicked out of country for not complying to local need? Given its ‘compromise’ in other countries, what made it treat Pakistani demands differently?

This shows that Blackberry has played well with the press and now western media is appreciating Blackberry for its stand and conveniently ignoring the fact that Blackberry was, in fact, asked to leave.

The Pakistani government, on the other hand, has failed us again by getting all the negative press that could’ve easily been avoided.

Do you think there’s more to the BlackBerry Pakistan saga? Who is to blame? Let us know below.

UPDATE: The Government of Pakistan has notified BlackBerry that it has extended its shutdown order from November 30 to December 30. BlackBerry will delay its exit from the Pakistan market until then.