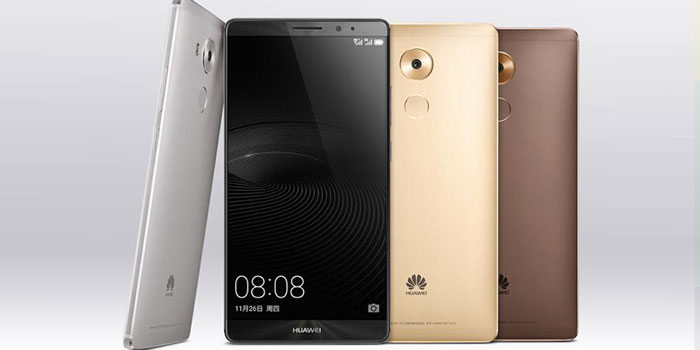 Huawei has announced a new large-screen smartphone on par with the Mate S, the new Mate 8. The new Huawei Mate 8 phone comes with a 6” display with 1080p resolution, making it a surefire hit with those who love their smartphone displays.

The phone also has a 2.5D glass on top to make it appear bezel-less. A metallic finish in Gray, Silver or Gold further adds class to the package.

Under the hood, you get the new Kirin 905 home-baked chip with big.LITTLE architecture. It consists of four low-power Cortex-A53 plus four high-performance Cortex-A72 chips. It is complemented with an “i5” co-processor that can handle certain low-power features such as the sensors, speech recognition and so on. The GPU is the slightly aging Mali T880MP4 chip with either 3 GB RAM/32 GB storage, or 4 GB RAM / 64 GB storage combo.

The back boasts a Sony IMX298 16mp lens with 1080p video recording. The back also boasts a fingerprint sensor below the camera, with both the lens and sensor now having a circular design. The front also boasts an 8 mp IMX179 lens.

Pricing isn’t announced as of yet, however, it will hit the home Chinese market in Q1 of next year, with other markets set to follow soon.