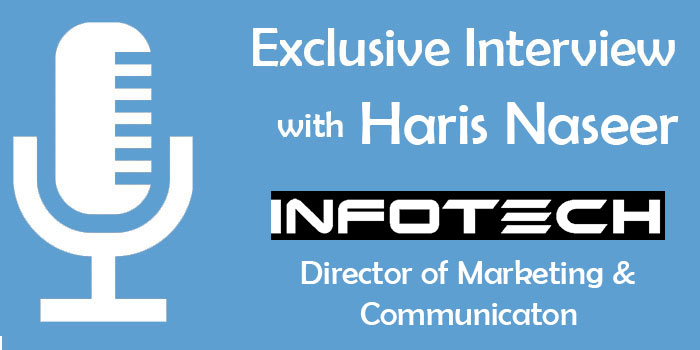 InfoTech is one of Pakistan’s leading IT exporters. The company has its own product lines around capital markets and citizen services which it exports to emerging markets in Africa and Asia.

With an established presence in major Pakistani cities such as Lahore, Karachi, and Islamabad, the Infotech Group employs over 350 personnel. Outside Pakistan, the company also has offices in Dubai, London, various African cities as well as in Lima, Peru.

Recently, ProPakistani got a chance to sit down with Haris Naseer, the director of Marketing and Communication at InfoTech Group.

InfoTech has had a long run. Can you tell us a little bit about the journey?

Haris Naseer: Infotech started in 1987 with their main business being reselling hardware technology. In 1995, the company re-branded as a solutions provider and partnered with software vendors like Oracle and Microsoft. Since then, the company undergoes a major shift in how it operates every 5 years or so.

In 2000, Infotech started consultancy services revolving around its business area. In 2005, they built upon their domain knowledge and started building products for the financial sector that were either non-existent or too expensive to afford for emerging economies.

Now, Infotech is focusing purely on being an end to end solutions based business that also provides consultancy.

In your opinion, what’s the total size of Pakistan’s IT industry’s and how much value are we exporting per year?

Haris Naseer: There are no concrete figures right now. The government bodies and PASHA have estimated the IT industry at $2 billion out of which $1 billion is exports but personally I believe it’s no more than $700 million. 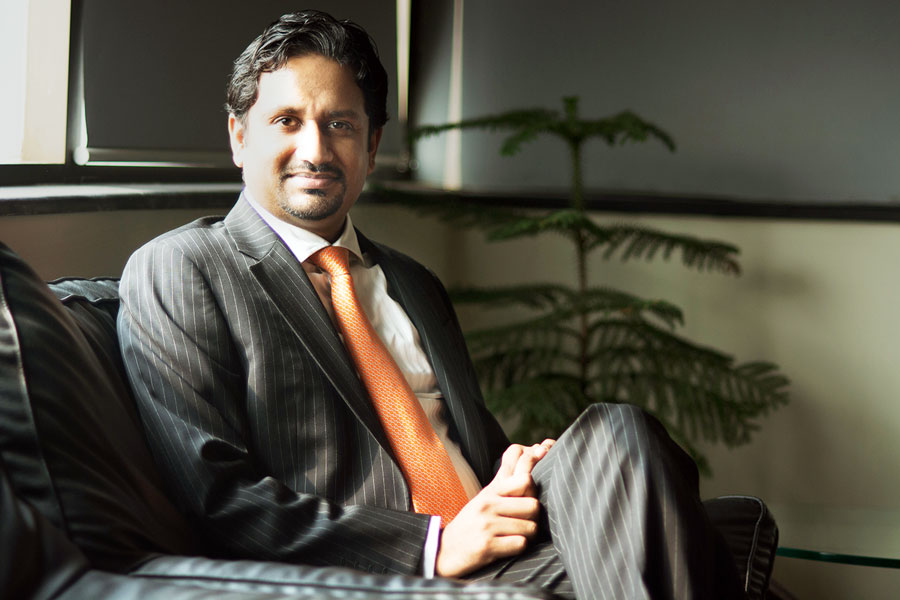 What do you think is holding back the Pakistani IT industry?

Haris Naseer: The IT industry has a LOT of potential. It’s just a matter of training the human capital. However, you need to really focus on that. Other private companies and Infotech itself can only do so much to create a capacity to do large-scale work. For example, if I needed 400 Oracle developers for a client, it’d be a difficult task. The supply simply isn’t there. There are plenty of graduates to go around, but those who can be good resources are just a fraction of the total number.

Infotech has tried in the past to come up with a few programs for universities where the curriculum is more product focused for a few courses. No major changes but enough so that the learning curve when they first start a job is lower. But even that has a limited impact. The scale should be bigger and a concerted government-backed push is needed to make changes en-masse. TechHub Connect is a great initiative as they invite people from academia and industry for sessions that explore how they can collaborate effectively.

But there needs to be a lot of work done before this industry-academia gap can be bridged. This is especially important for tier 2 universities because their graduates are less employable than those of tier 1 universities. The onus of taking initiative and making things happen lies with them. Frankly, the private sector is so busy facing its own set of challenges that we hardly get time to focus on anything other than work.

How do you see the role of PSEB, PASHA and other similar private and public organizations for the promotion of IT industry?

Honestly, they aren’t doing what they should be doing and that’s a sentiment that’s echoed by most of the industry right now.

When it comes to PASHA, it’s not that they lack skills, it’s just that their bandwidth is very low. Four to five employees can’t do much. They don’t have institutional funding, they don’t have government funding, their revenue is all from membership and it’s very low. If Pasha wanted to let’s say, organize IT roadshows in 10 countries, they wouldn’t be able to. They don’t have the financial resources or the human capital to do it.

And PSEB is run like any other government organization. They do have a few good programs, like how they participate in a lot of exhibitions around the world, but it’s an ineffective way of generating revenue. They need to be more focused with our missions abroad. That’s how other countries do business. Two reasons why. Firstly, they are very effective in terms of evangelizing for local organizations and secondly, their trade officers are highly skilled in terms of whatever they want to promote. A trade counselor in the Indian embassy in the US would be someone who understands technology since its one of their greatest exports.

So overall, we need a multi-faceted approach and a well-thought plan that involves the industry as well. PSF and other government bodies should decide on a set goal, set a $8 billion target in IT services export by 2020 and sit down with the industry and ask them what they should do in order to enable them to do that. Such a debate simply doesn’t exist and it has to.

Any thoughts on the newly imposed 8% minimum tax on services, and how is it going to impact the industry?

It’s going to be severe. A lot of areas in technology are low margin. Like I know some BPOs working on a 1-2% margin. Software licensing, which has been classified as a service by the government, is also in the single digit margin.

This 8% tax severely hampers these and other low margin businesses. We are, as an industry, in discussion with FBR and PSF is also forming a committee to raise this issue but as of yet, there has been no positive movement.

What do you think about the startup movement in Pakistan?

It’s a very healthy sign. It’s high time startup culture got going in Pakistan. I’d say we are in an infancy stage. Some people are working on great products, but they don’t have the ecosystem around them so they face challenges with funding and setting up their business effectively.

We have seen the likes of Rozee and Zameen raise funding so the ball is now rolling and gaining momentum. In 2 to 3 years, we will see a more mature market and polished products being launched in Pakistan. It’s just a matter of building an ecosystem that can make a startup a business that’s a serious global contender.

Do you have any plans to dip into the startup industry in Pakistan?

We are quite focused on the areas we are already present in. We have made some investment (under $100,000) in companies operating in the fintech area, with one of them being in Pakistan.

So while we aren’t actively engaged in the startup scene, it’ll change in a couple of years. We’re exploring the possibility of a small venture capital fund, but it’s still in the discussion phase.

We don’t see a lot of fintech startups. Why is that?

Regulations in Pakistan. The State Bank has very strict restrictions on who can process financial transactions and how they do it. Government bodies are also behind the curve when it comes to how the global fintech industry is shaping up. We’re at a very basic electronic financial stage right now. Banks have electronic banking, but the services offered still aren’t comparable to what you get in the developed world. So regulation is the biggest impediment right now.

Is lack of consumer interest also a hurdle for new companies and startups?

In my opinion consumers tend to leap to new things quite quickly. When Daraz started, people were skeptical but they’re eating their words now. If tomorrow a great mobile wallet or any other financial solution comes, I’m sure consumers will latch on to it. The regulatory side is the main challenge.

Tell us about some of the work InfoTech is doing.

We’re doing projects around automated billing, fault management, customer care. We recently did a project for Peshawar Electric Supply and moved them to the latest Oracle-based ERP system. We’re also working with Karachi Electric on a pilot project for automated meter reading. We’re also working with a Korean company called LS Industrial Systems for the development of a few products for the utility sector.

In Saudi Arabia, we’re doing two projects for the national water company and a power company. Other than that, in the financial sector, we did an upgrade for Bank Alfalah for their core banking system. There are a number of projects that are more conventional, like bank IT system upgrades, an enterprise sign-on solution for Tanzania Revenue Authority. So there’s a lot going on but the common theme is that we work on banking, finance, and public/utilities solutions.

I’d especially like to mention a very exciting project that’s currently underway called the EAC integration of capital markets. East African Countries (EAC) is a community of five countries including Tanzania, Ghana, Burundi, Kenya and Uganda. We’re linking all their stock exchanges so that investors from one country can trade in another without having to license there. EAC is similar to what SAARC is in the Asian region. They’ve already done their integrations with customs so goods cleared in one country can freely travel to another and other things. Their eventual goal is to be like the EU and we’re doing our part in making sure they get there. We hope our solution will be live by early next year.