YouTube, in an interesting development, has started displaying “YouTube PK” as its default logo on the website for users accessing YouTube.com in Pakistan. While its not entirely clear, this move hints that a localized version of YouTube has been in play instead of default global version that Pakistanis used to get till few days ago.

ProPakistani users are reporting that they are seeing below logo on YouTube.com:

It must be noted here that this change in logo is not Pakistan specific, in fact YouTube users in other countries were already being served their respective country’s name with YouTube logo.

Unlike Google.com, where a local version for Pakistan is served to Pakistani people through a Google PK logo, YouTube never displayed its Pakistani audience with YouTubePK logo before today.

Since YouTube has now started displaying unique dedicated country code with its logo, move can result into an unspoken arrangement where Pakistani government could officially lift the ban on the website, or at least may not enforce the ban as before.

It would be worthy to mention here that YouTube is currently not blocking any content for its Pakistani version. All videos, that are available on its international version, are accessible in Pakistan as well.

It maybe recalled that YouTube is officially banned in Pakistan since September 12, 2012.

Since then, for over a month now, YouTube is accessible in Pakistan and is enjoying sizable traffic from Pakistan.

Check below the rapid growth of traffic on YouTube from Pakistani only: 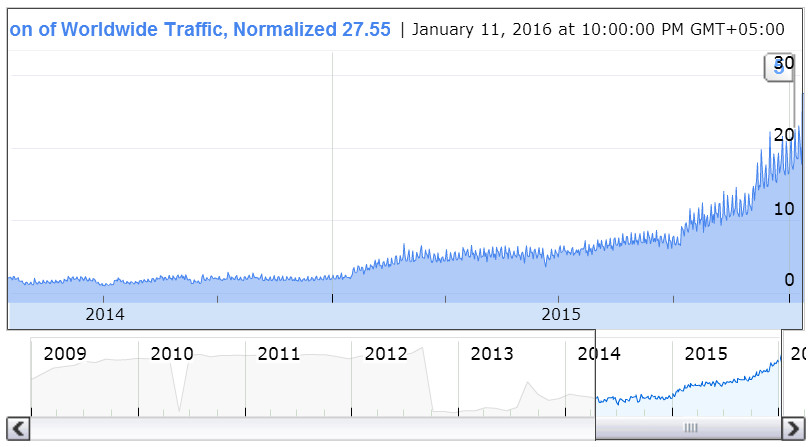 Traffic to YouTube.com from Pakistan

What do think of this development? Will this result into lifting of ban on YouTube? Do Share your thoughts!

YouTube announced that it has just launched localised versions in Nepal, Pakistan, and Sri Lanka. This launch provides Internet users in those countries with a more tailored YouTube experience to find high quality local content so they can be informed, entertained, educated and inspired by content for their own culture and language, while continuing to access the wide array of content on the world’s largest online video platform. Now, users visiting the YouTube homepage from those countries will be able to see videos and playlists that are popular in their countries in their local languages and domains.

With over 1 billion monthly users worldwide, YouTube is the world’s largest online video sharing community, and is now available in 88 countries locally, as well as in 76 global languages, including in Nepali, Urdu, and Sinhalese. Starting today, visitors to YouTube from each respective country will see their country-specific YouTube site by default: for instance, users from Pakistan will now see the YouTube Pakistan site in Urdu when they visit the YouTube homepage, with playlists of trending and recommended videos popular in Pakistan. Viewers can now more easily find content that is beloved in their own countries, and discover more relevant local content on the world’s largest and most diverse video sharing community. This launch will also provide more people from Nepal, Pakistan, and Sri Lanka the chance to share their own stories and videos with the rest of the world.

“We aim to provide an even more tailored YouTube experience by launching versions that are optimised for Nepal, Pakistan, and Sri Lanka. We also hope that this will pave the way for the work of local creators, personalities, and musicians to shine on the world’s largest and most vibrant video community,” said a Google spokesperson.

With Google’s mission to organize the world’s information and make it universally accessible and useful, we are committed to protecting the exchange of ideas on all our platforms, including on YouTube. We continue to engage with industry, governments, and civil society groups globally to ensure the Internet remains open, safe, and secure. Government requests to remove content will continue to be tracked, and included in our Transparency Report.

Thanks to Muhammad Bilal for the tip.