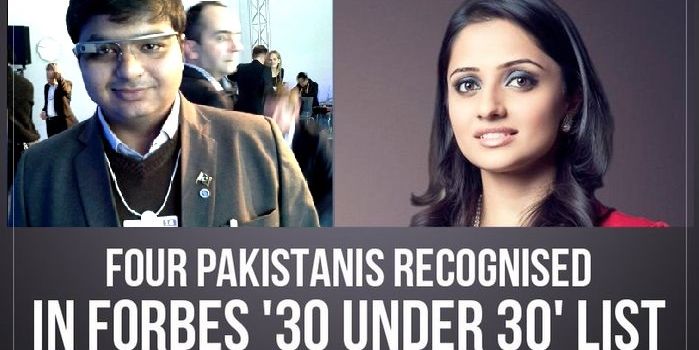 Forbes Asian list of “30 Under 30” consists of four Pakistanis. The 2016 edition of the list was published today. The business magazine recognised 600 young game changers from 20 different fields, 30 from each field.

The 30 Under 30 list of prominent figures from 2016’s Social Entrepreneurship and Media Marketing category features four Pakistani’s. These individuals are believed to be changing the world with their expertise in their fields.

Khalida Brohi is a 25 year old who has started her very own non-profit organisation. She is the founder of Sughar, an organisation aiming to empower women in rural areas of Pakistan.

She began her work at the age of 16 after she became a witness to an honour killing. Sughar provides women from 23 villages a chance to go through a six month training programme. It is a platform for women in rural areas to gain knowledge about business, learn ways to monetise their traditional skills in embroidery and get access to loans and markets to sell their merchandise.

Fiza Farhan, a 27 year old, made the news a few days ago when she was named in the United Nation’s panel for the development and empowerment for women. This is the UN Secretary General’s first high-level panel on Women’s Economic Empowerment.

Fiza is the CEO of Buksh Foundation and the Director of Buksh Energy. She was featured in last year’s list of Forbes ’30 Under 30’ Social Entrepreneurs as well.

Umar Jahangir is young entrepreneur working for the betterment of Pakistan. He is running several not-for-profit healthcare programmes and organisations in Karachi. The 24 year old is also known for creating a one of a kind blood bank linked to mobile networks, a first in Pakistan.

Umar has over 6 year of work experience in innovative developments in the IT, media, advertising and health sectors.

Muniba Mazari, aged 28, has been in the news recently as well. She was listed in BBC’s 100 Inspirational Women of 2015. Mazari is Pakistan’s first female Goodwill Ambassador for the United Nation’s gender equality and women empowerment.

Muniba, who suffered paralysis after an accident at the age of 21, is Pakistan’s first wheelchair bound model, artist and an anchorperson at PTV. She is a role model for women across the globe who feel that no setbacks can prevent them from having a successful career.