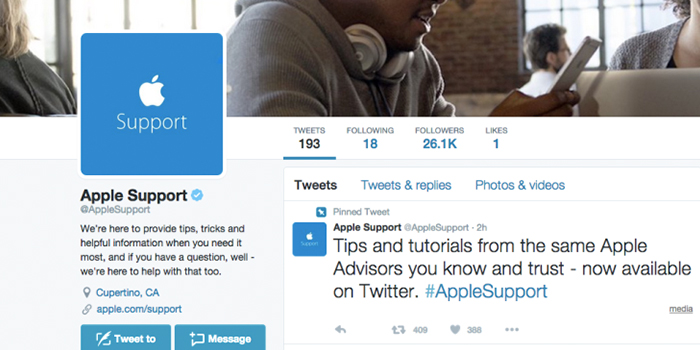 Twitter, the microblogging service that’s popular for news and brands, has been around since 2006. On March 3 2016, the world’s most well-known tech company Apple finally made its presence to the social network as well.

The general idea behind Apple’s Twitter presence is to provide people with Apple-related questions and work as a general support channel. The service’s Twitter handle, @AppleSupport will be regularly tweeting tips and tricks for Apple products.

“We’re here to provide tips, tricks and helpful information when you need it most, and if you have a question, well — we’re here to help with that too,” the @AppleSupport Twitter blog reads.

Though its just being half a day ever since it made its debut, Apple’s Twitter account has attracted 106k followers at the time of writing this post. The account has also answered numerous questions posed by its Twitter followers, related to queries about why calendar entries are disappearing to frayed MacBook cables to iCloud backup woes. It has also tried to gently and politely put down people who just want to know what new products Apple has in the pipeline with a  ‘we don’t comment on future products’ nudge.

Here’s one of its earliest tweets, featuring a tip for Notes App on iOS:

The Notes app has some awesome hidden tricks. A favorite of ours: how to turn lists into checklists. #AppleSupport pic.twitter.com/6fdzsRT1i4

It is also interesting to note that the move has come at a time when Apple is embroiled with a very public battle with the FBI. Pundits believe that Apple’s move to Twitter can also help its PR image by connecting it with fans and followers and by regularly getting its word out on the microblogging site.

Expect @AppleSupport’s Twitter followers to continue climbing more since Apple as a company has historically shunned social media networks, and the current development has come as a pleasant surprise to many in the industry.