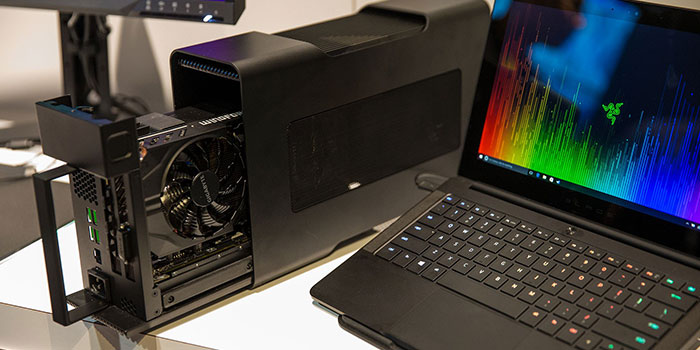 Laptop gaming has always had a love-hate relationship with fans. Clearly, there is a demographic which exists that appreciates the notion of playing games on a mobile device, but it comes at the cost of design, and is not exactly the most powerful around.

This might change soon, as solutions such as the Razer Core start hitting the market, which allow the laptop to use an external GPU while retaining all the design properties of an Ultrabook. The most recent proponent of this idea is AMD, which hopes to popularize the concept by standardizing the connectors.

“But there’s still a HUGE appetite for thin notebooks that can game. I also bet there’s a bunch of gamers out there who, as they get into their 30s and 40s, wouldn’t mind condensing their entire computing life down into one device that does it all.”

We can’t speculate at this point about the “standardized connectors”, however, some might argue that those are already here. Both the Razer Core and the Alienware Amplifier, two of the most promising products so far utilize the Thunderbolt 3 connection through the new USB Type-C.

Thunderbolt may not be the most widely used connection, but it is still a better option than having a proprietary one, especially since Thunderbolt version 3 now supports enough bandwidth to power a laptop’s display. It is also more cultivated than simply putting the PCI-E pins on the side, a method experimented as recently as a year ago by Alienware.

The external device itself (and bulky) can house multiple cards and has a built-in power supply. In the case of the Razer Core, you also have multiple USB ports and an Ethernet port.  Needless to say, if the potential of this concept is realized, it will make the life of laptop owners way easier. And sweeter.