The ICC World T20 2016 is about to start and Huawei is celebrating the cricket festival with huge price discounts on its latest flagship phablet, the Mate8. Huawei is the first to offer discounts before the start of the cricket season.

Those interested in the offer can buy the phones at their nearest Huawei brand outlet or retailer and grab a Huawei Mate 8 with a discount of Rs. 6000. Huawei Mate 8 Standard and Premium variants are now priced at Rs. 54,999 and Rs 63,999, respectively. However, be aware that this is a limited time offer and will only last until the end of the World T20. The limited time offer is valid from 3rd March to 3rd April, 2016. 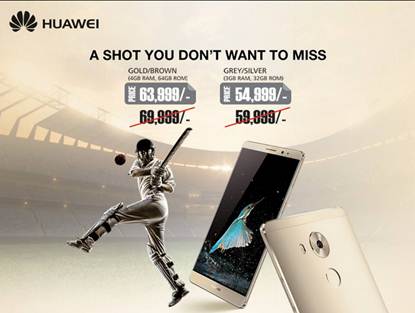 The phone comes with a massive 6-inch screen and a 1080p screen covered in 2.5D Gorilla Glass at the front. The behemoth of a smartphone is powered by a Huawei-built Hi-Silicon Kirin 950 processor and 3 to 4 GB of RAM (depending on the variant). Huawei’s latest processor is a next-gen processor as it’s built using ARM’s latest high-performance four Cortex-A72 cores clocked at 2.3GHz and four battery-saving Cortex-A53 cores clocked at 1.8GHz. The Kirin 950 can go toe to toe with the likes of Snapdragon 820. It was also the first smartphone to come with a Cortex-A72 based processor. Huawei has also included an additional “i5” co-processor for mundane tasks such as speech recognition, sensor input and music playback. The graphics are handled by the Mali T880MP4 chip.

The smartphone comes with 3GB/32GB and 4GB/64GB RAM and storage combos. There’s a 16MP Sony sensor which takes charge of the rear camera while the front camera features an 8MP shooter. Mate 8 packs a 4,000 mAh battery which, Huawei claims, should last 30% longer than before. The phone is available in Champagne Gold, Moonlight Silver, Space Gray, and Mocha Brown colour options. More detailed coverage can be viewed here.

Recently, Huawei sponsored Mr. Moin Khan for his campaign “My Huawei My Pakistan”.  And now Huawei will be sponsoring the Beacon House National University’s Bestival, with many more initiatives lined up for the future.

If you think the discount makes the Mate 8 a worthy buy, you should hurry and take some time from the cricket matches to buy Huawei’s flagship phone.