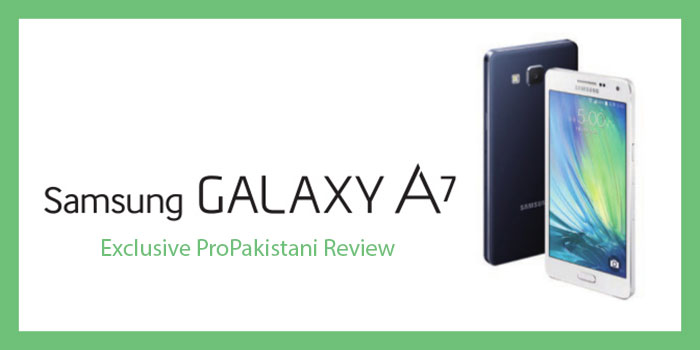 Samsung’s Galaxy A7 is the latest A-series phablet that looks and feels a lot like last year’s Samsung flagships. While the hardware points at it being a mid-ranger, the asking price of about 53,000/- PKR says otherwise. Worth it or not? We find out in this detailed review.

Samsung Galaxy A7 comes packed in a standard Samsung packaging with all the usual accessories (an adaptive fast charging charger, a microUSB cable and a pair of in-ear headphones) inside.

If you feel like, you can read more about it in our earlier Galaxy A7 unboxing blog post.

Last year, Samsung overhauled their design language. Instead of making plastic devices — like they used to — they started making more premium metallic devices. Samsung’s new Galaxy A7 is a premium mid-range (but aggressively priced) smartphone that falls inline with their new design language.

Galaxy A7 is unarguably one of the best looking Samsung Galaxy devices out there in the market. Front and back of the A7 are made up of Gorilla Glass 4 protected 2.5D glass panels, while the metallic frame lays in between them. Even though these glass panels make the Galaxy A7 quite slippery, you’ll notice that the nicely chamfered edges of the device not only look beautiful but also do improve the grip. While I’ve never had the Galaxy A7 slip out of my hands, I still had to catch it a few times falling off my lap or out of my trouser’s pocket.

Unlike the similarly priced Galaxy S6, the Galaxy A7 lacks a heart rate sensor. All you’ll find on the back of this device is a 13MP primary camera with a smaller hump than previous Galaxy devices. There also is a single LED flash, a Samsung logo and a DUOS logo.

On the sides of the device are the thin volume up/down and power buttons. Despite being thinner than usual, these buttons are not uncomfortable in use.

Under the hood, Galaxy A7 packs an average Exynos 7580 Octa-core CPU with Mali-T720MP2 GPU and 3GB RAM. These are more than enough for the usual day-to-day tasks but the Galaxy A7 does occasionally tend to slow down. Nevertheless, this is nothing that closing unused open apps won’t fix.

Below are the results of the AnTuTu Benchmarks running on the Galaxy A7.

Moving on, Galaxy A7 has admirable battery timings owing largely to its above average Li-Ion 3300 mAh battery. As we have come to expect from most modern devices, the battery on the A7 is non-removable as well. Good thing is that the A7 also supports Samsung’s adaptive fast charging which allows the device to be fully charged in no more than 80 minutes (1h 20m).

Once the device was fully charged, it was able to last through 24-28 hours of heavy usage.  On normal days, the Galaxy A7 went through a maximum of 48-50 hours of usage without needing to charge.

The Galaxy A7 comes with Android 5.1.1 (Lollipop) installed and Samsung’s TouchWiz running on top of it. Its user experience is similar to what we have seen on the Galaxy S6 or Note 5.

Turning the screen on, we get a familiar TouchWiz lockscreen. You can swipe left or right to unlock the device or if you have fingerprint unlocking setup, you can place your thumb on the fingerprint sensor to unlock the device. There also are two icons, one for the phone and other for the camera app. You can press and swipe on any one of these to start the respected application.

Once you’ve successfully unlocked the device, you end-up on the TouchWiz launcher. This is somewhat like a traditional Android launcher where you can place icons or widgets of your choice in the manner you’d like. Tapping and holding on any empty space or pinching out shows you the overview of all the launcher screens.

In addition, there is a left most screen which by default shows you news from different categories e.g. Science, Technology, Sports, Travel and etc. You can configure to see only the news from categories you like or you can easily disable it from the overview mode.

Samsung’s TouchWiz places all the application in the app drawer, which has a few customization options available. You can either sort applications alphabetically from A-Z or manually place them where you’d like by tapping the “Edit” option. When there, you can also make new folders or edit the old ones.

Swiping down from the top (while at the homescreen) gets you the notifications drawer. You’ll find all your notifications here with a few quick toggles and other options up-top. You can go into the edit mode to select which toggles to show, which ones to hide and in what order.

Galaxy A7 also supports most of the gestures such as Smart Alert, Mute and Palm Swipe. The only one that we found missing was Direct Call.

Just like the Samsung flagships, Galaxy A7 also comes with a fingerprint sensor. Unfortunately, my experience with it has not been that good. Although, the software implementation is like what we’ve seen on the Galaxy S6 and Note 5 but the accuracy is not. I have almost always had to give it two tries before the phone recognizes my fingerprints. Another thing that is a bit different here is that A7 only allows you to store a maximum of 3 fingerprints while the S6 or Note 5 can store up to 5.

Lately, the Samsung flagships (e.g. S6 Edge+ or Note 5) have come to be known for having the best cameras in the industry. The Galaxy A7 tries to follow the same and has an above average 13MP primary shooter with f/1.9 aperture, OIS, auto-focus and a LED flash.  For all the selfie addicts out there, Galaxy A7 also does have a decent 5MP front facing camera with F/1.9 aperture and 1080P video recording.

Following is a summary of our key findings from the Galaxy A7 review:

Wrapping up the review, I would say that the Galaxy A7 would’ve been a wonderful mid-range smartphone only if Samsung had gotten the price right. It seems to be a complete mid-range package with amazing build, great looks, average performance and a good enough camera.