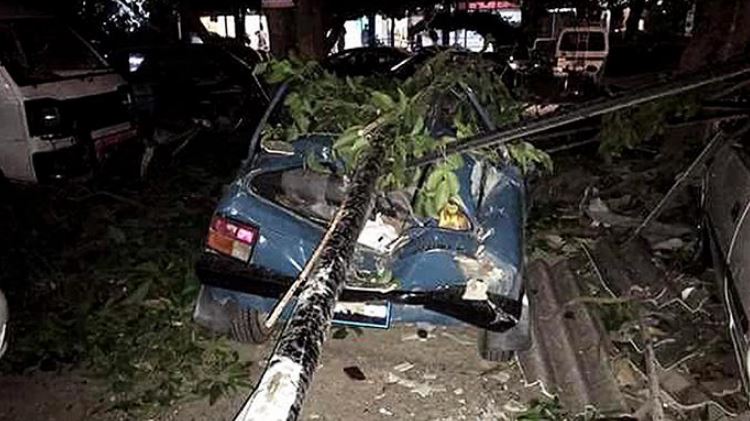 Yesterday, the residents of Islamabad and Rawalpindi — and across KPK and upper Punjab — had to face a powerful storm, one that spread quite a lot of damage in its path.

Apart from the damage to property, reports have put human casualties at 12 and dozens injured.

KPK and FATA were also affected by the heavy rains, with as many as 7 casualties across the province and tribal areas.

All affected areas also saw electricity outages as well, with some of them still not online.

Social media provided a blow-by-blow account of the destruction and havoc that the storm left in its wake.

Such strong winds are a rare occurrence in Islamabad:

Winds at 145 kmphr lasted for 30 mnts or more. It is an exception, says Dr Hanif. Islamabad, reports say, is badly hit.

So strong were the winds that they knocked over billboards and uprooted trees across the cities:

Disastrous Storm Ever in #Islamabad pic.twitter.com/05kFY4B1OZ

Centaurus Mall in Islamabad had a glass roof shattered, spreading panic amongst its visitors:

This just happened in Centaurus #Islamabad Hopefully everyone is safe. pic.twitter.com/bkQ2T4tUlv

But even in the midst of the ferocious storms, the city was not short of volunteers. Many people and NGOs stepped up:

Some places caught fires as well:

Volunteers #FiF #Islamabad are busy to take control over fire due to short circuit in Sabzi Mandi. #RapidResponse pic.twitter.com/HWtbg0d3h4

Some celebrities also tweeted their condolences:

My prayers&sypmpathies r wid those ppl who have lost their lives in #Islamabad strom.May Allah keep all ppl out there safe and sound.Ameen

All this was yesterday. When people woke up in Islamabad, they were greeted by these sights, thanks to the hard-working CDA workers who cleaned up after the storm:

But is the storm truly over? Or will the twin cities have to be vigilant about what the next few days hold for them: