Mobile phone importers in Pakistan have pleaded the federal government, the finance minister and Chairman FBR to re-consider its decision of increase in taxes on mobile phones.

A press advert, published in various news papers, reads that mobile phone industry is already heavily taxed since past few years and that the imposition of these new taxes were made without the consent and input of the industry.

Current taxes on high-end phones are up to Rs. 8,000. With revised taxes, each high-end phone could get expensive by around 11K mark, said Karachi Electronics Dealers Association Idrees Memon while speaking with Express Tribune.

“High end phones, like new iPhones, could get expensive by Rs. 11,000 with these new tax rates”

Mobile phone makers say that taxes on mobile phone industry have reached its threshold level and industry is currently on the verge of catastrophe. 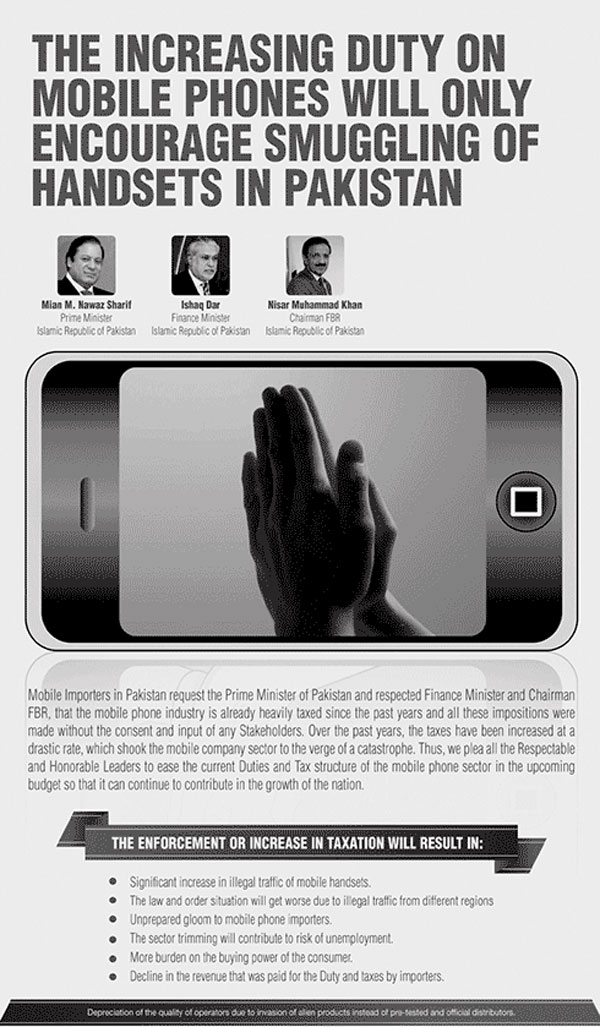 Mobile phone importers said that increase in taxes on mobile phone is not going to help anyone but the smugglers who import Mobile Phones through illegal channels to avoid taxes.

Experts say that increase in taxes on mobile phone is going to be impact negatively for all stakeholders, including mobile phone makers, cellular companies, content providers, advertisers, consumers and as well as for the government as tax collection through sector will decrease due to increased number of smuggled phones.