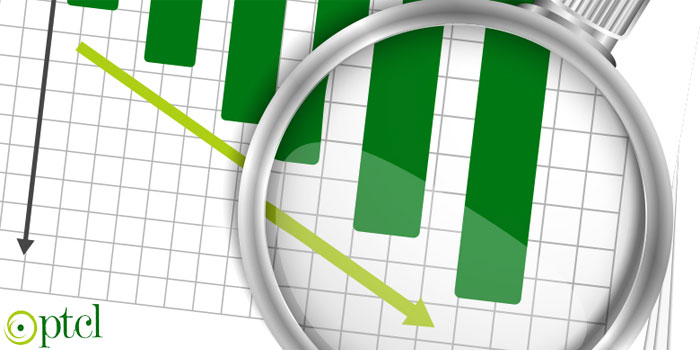 Facing different challenges and operational issues, PTCL Group failed to sustain its profitable growth during the second half of 2016. Its profits declined by 2.2 percent when compared with last year’s corresponding period.

The cut in profit growth was driven by sluggish profitability of the Group due to dwindling financial performance in the second quarter, which took a substantial dip by 45 percent from previous year’s quarter.

It is worth mentioning that in the first quarter of 2016 the Group managed to post a record growth of 146% profitability versus the bottom line of the previous years.

The Group revenues slipped down by 3.4% in the first half of 2016 on year-on-year basis, standing at 58.9 billion. It provides an interim cash dividend of Rs 1 per share to its shareholders.

PTCL Company profit without its subsidiary such as Ufone and U Microfinance bank, went down by 8 percent. It secured a profit of Rs 5.565 billion in the first half of 2016 as compared to Rs 6.07 billion profit recorded in the corresponding period of 2015.

One of the known challenges reported by company’s official is that PTCL Group reimbursed billion of rupees on account of pension raise for its retired or ex-employees in the second quarters.

The increment in the pension was part of the government announcement under the Federal Budget 2015-16, which it implemented late but had to pay out the upgraded pension scale to its nearly 40,000 ex-employees.

The new leadership of PTCL which assumed its office early in 2016 will have devise a plan to mitigate different issues and challenges that the Group and its subsidiaries are facing.

In order to maintain growth in profitability with expansion of services and operations in the country in which different operations are giving competition to its brands in the field of cellular phone and broadband services, PTCL has its task cut out for it.