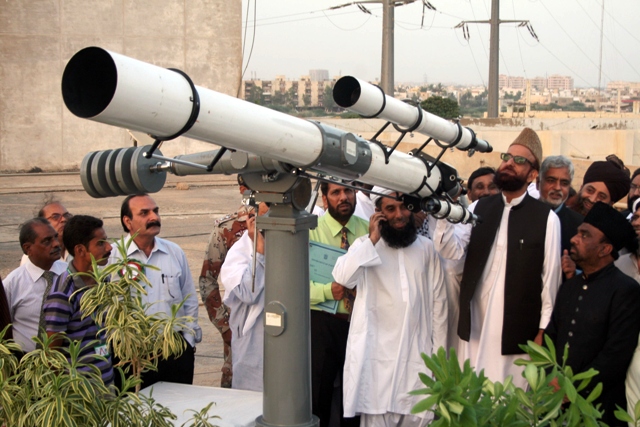 Recently, Mufti Munib-ur-Rehman, Chairman of the Ruet-e-Hilal Committee for moon-sighting, was in the news again.

He requested the Ministry of Religious Affairs to restrain the Met Office, the authority on weather forecasts, from making moon sighting predictions.

Observers say that one reason for taking such a measure is to avert confusion and to solidify the stance of Ruet-i-Hilal Committee (RHC). Whereas others believe that the Committee wants to get exclusive rights for this responsibility, relying on eyesight for moon-sighting instead of the scientific methods employed by the Met Office to accurately predict the appearance (and disappearance) of the moon on certain important Islamic dates.

The letter to the Religious Ministry that requested the same was written on Wednesday, according to reports. A senior official in the ministry who wished to remain anonymous, disclosed that this decision was made after last month’s controversial press conference at the time of Eid ul Fitr moon sighting. Readers may remember that on that day, Mufti Munib was swarmed with the press, making him lose his temper given the behavior of certain media personnel at the press conference.

The source also disclosed that Met’s Office has received the letter and has taken notice whereas no official response has been made yet.

Furthermore, the committee will gather at Karachi on 2nd of September for the Zilhaj moon sighting to announce the date for Eid ul Azha.