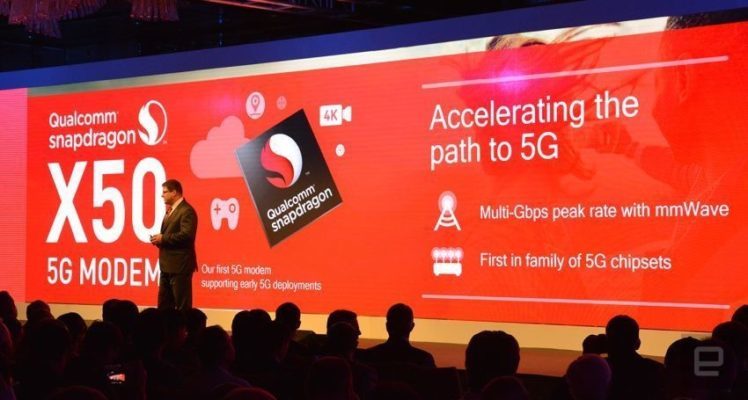 We have barely even caught up to the rest of the world with 4G and now a company is announcing the first 5G modem already.

Qualcomm one of the most popular Smartphone chip makers has revealed the world’s first 5G modem. Known as the Snapdragon X50, it will support speeds of upto 5Gbps. The global average 4G speeds are only 13.5Mbps so you’re not alone in thinking that 5Gbps is unlikely so early in the game. Do keep in mind however, that these are only theoretical speeds and this 5Gbps milestone, can only be achieved under lab conditions,

5G is going to launch in South Korea in 2018 and will be slowly rolled out in US and UK by 2020. There is no commercial network currently capable of supporting speeds that high. South Korea is the leader in the internet race with the fastest global average internet speed for 4G. The fixed internet connection speeds in South Korea are also one of the fastest with an average of 98.7Mbps. All things considered it makes sense for South Korea to be the first country to be rolling out 5G.

Earlier Ahsan Iqbal said that Pakistan will soon be getting 5G and that it shall be included in the list of countries selected to test 5G technology. He later clarified his statement saying that Pakistan was lagging behind especially in information communication technology.

Implementing 5G is not easy either. 5G uses millimeter wave spectrum of 28 GHz range. These waves cannot be transmitted over long distances and cannot penetrate walls either. For that Mobile operators will need to install several small stations close together instead of large towers in bigger cells. This might also increase the cost for implementation of 5G technology for 3rd world countries like ours.

For now Qualcomm is planning to give companies sample chips to test in 2017. The first 5G enabled phones are expected to come after 2018.