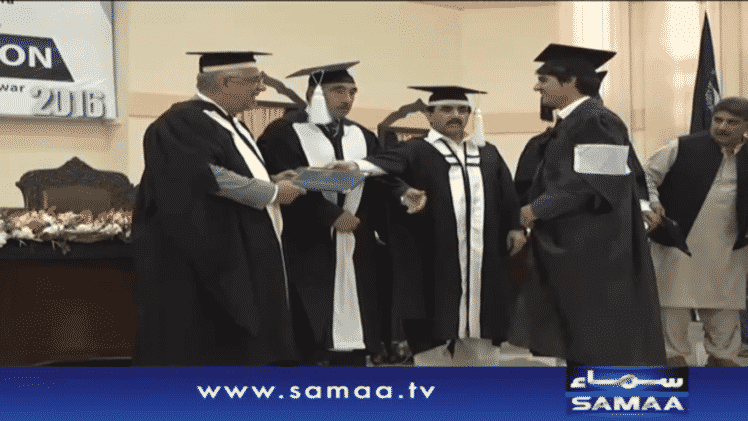 During the convocation of Peshawar University, an interesting event occurred.

The Governor of KPK, Iqbal Zafar Jhagra (PMLN), was awarding degrees for all the graduates. A journalism student’s turn came up, he walked to the stage but instead of getting the degree he refused to take it from the Governor.

He said that he will not accept the degree from someone who himself is corrupt. He literally said,

Following that the student was arrested (!) and was not given a degree or certificate of any sort. When the governor was informed of his arrest he said that he might have a difference of opinion with the me but that doesn’t mean that he should be arrested or not given a degree.

Governor asked for the immediate release of the student.

Despite these orders the student still hasn’t been released from prison as of yet and instead has been transferred somewhere else for now.

It is surprising to see someone being arrested for committing no crime at all. This goes on to show the level of freedom of speech we have in Pakistan.

Whether the student receives a degree or is released from prison later on is yet to be seen. For now he will have to spend time behind the bars for no apparent crime at all until an inquiry is called on his arrest.