It is nothing new that the Cable operators were opposing the auction and threatened to go on a hunger strike against the DTH auction.

The cable operators then protested by shutting down cable services across Pakistan. When that failed, they tried to get the auction itself stopped through a stay order from the Lahore High Court.

Pakistan Broadcaster’s Association issued a public notice in an effort to make the public “realize” that PEMRA was in the wrong by having the auction held in the first place.

DTH services would help bring in more revenue to the national exchequer and would ultimately benefit both the government and the consumer who wants better quality TV services.

PBA thinks that PEMRA has overlooked several things while deciding the DTH auction and companies that can participate in the bidding.

In response to their public notice, which was issued in several different newspapers, PEMRA issued one of their own.

The advert titled “Facts are different from Fiction” clarifies a lot of the blames laid on PEMRA by the PBA and asks some questions of their own from the PBA. 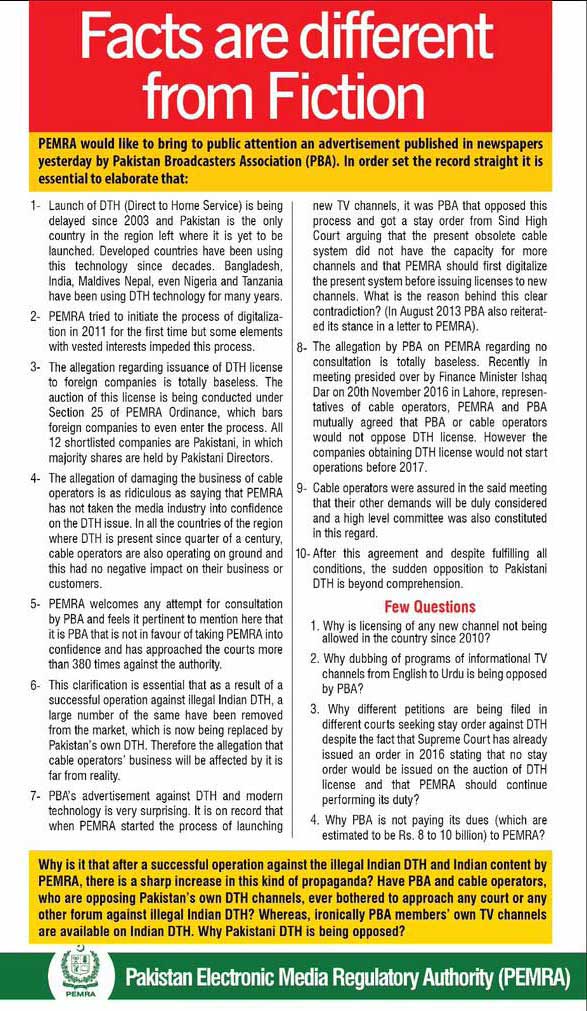 A lot of the arguments raised by PBA’s notice are being openly refuted and countered by PEMRA in the advert. PBA mentioned that the auction was illegal as PEMRA was including foreign entities in the auction. PEMRA countered by saying that all 12 companies are of Pakistani origin.

PBA also said that they were not consulted or invited for a meeting as it was necessary to consult stakeholders before the auction. PEMRA said that they had held a meeting on November 20th in Lahore presided by Finance Minister Ishaq Dar with representatives of PBA, PEMRA and Cable Operators Association present.

Asking Questions of Their Own

The advert proceeded to ask a few questions of their own. One of them asking,

Why different petitions are being filed in different courts seeking stay order against DTH despite the fact the Supreme Court has already issued an order in September this year stating that no stay order would be issued on the auction of DTH license and that PEMRA should continue performing their duty?

The auction will proceed once Supreme Court issues the order to do so.