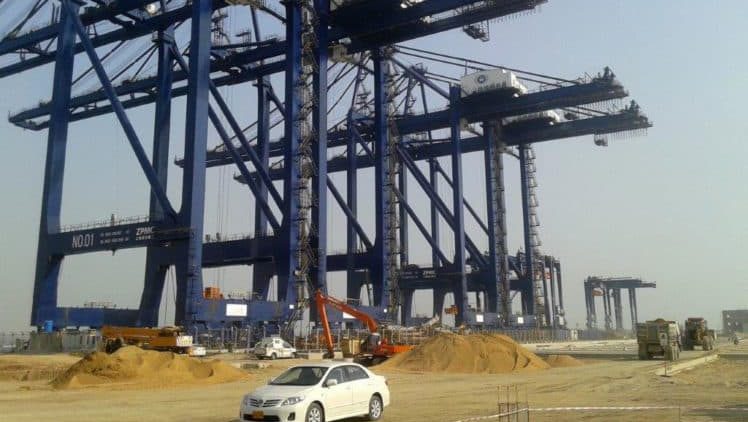 The port accommodated its first container ship, APL Japan, on Friday. According to official sources, the ship docked at Berth No. 4 at 3 pm. The ship was here to transport export cargo and was supposed to load 1000 twenty foot equivalent units.

The PDWCP is bound to play a vital role in the China Pakistan Economic Corridor.

The vessel’s draft length was 12 meters while its overall length was 262 meters. However, the PDWCP can accommodate much bigger ships.

How big we’re talking about here? The port has a designed draft of 18 meters with an operational draft of 16 meters. Which means that it can also handle mother ships.

The PDWCP is located at Kemari groyne east of Karachi Port.

The ship, APL Japan, docked at Karachi International Container Terminal at the West Wharf. It unloaded import cargo at the Karachi dock first then moved to the PDWCP to load up on export cargo.

APL Japan came from Jebel Ali port in Dubai and left for China on Saturday 2 pm. It will head to China after going through the Colombo Port in Sri Lanka.

Sources say that a small ship was deliberately selected for testing due to safety factors. They also said that PM Nawaz Sharif will officially inaugurate the port in the third week of January.

South Asia Pakistan Terminals (SAPT) is owned and operated by Hutchison Ports of Hong Kong. They have invested $600 million for the port. The company has brought in its equipment as well which includes 5 ship to shore gantry cranes.

Three buildings for administration, customs and canteen have also been completed. A power plant with a 28 megawatt capacity is also at the ready.

PDWCP can handle 3.1 million twenty foot equivalent units per year and has a storage yard which can hold up to 550,000 of the same.