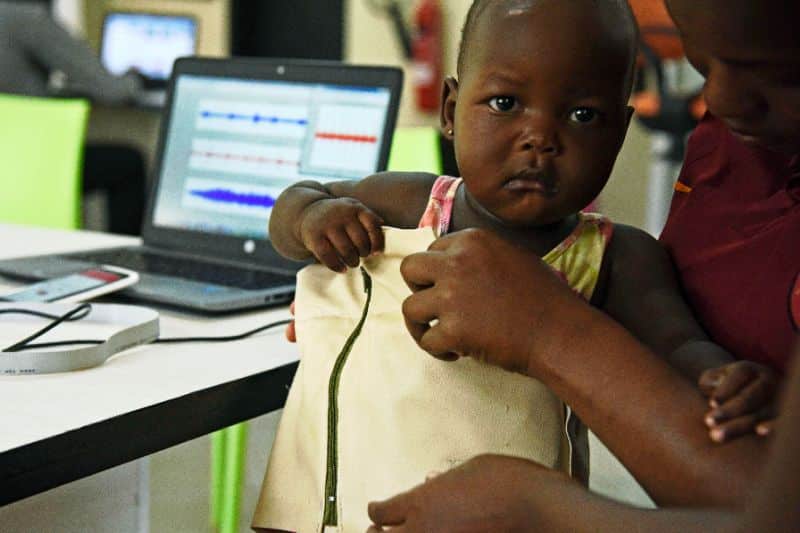 Pneumonia is a severe lung contamination that kills up to 92,000 children die of pneumonia in Pakistan every year. In 2014 alone, the Global Coalition Against Child Pneumonia released a report stating that 71,000 children in Pakistan died due to this silent killer.

Many of these casualties were due to wrong diagnosis of the disease. According to UNICEF, children suffering from pneumonia are more often than not, wrongfully diagnosed as having malaria. A lack of access to testing centers for poor communities means health workers often have to rely on basic clinical examinations to make their diagnoses.

“Pneumonia is the number one infectious killer of children under age 5 globally, killing an estimated 9,350,002 children around the world each year.” – Pneumonia Fact Sheet-2014.

In Uganda, where 24,000 children under the age of five fall victim to it every year, a group of innovative engineers have designed a “smart jacket” which will diagnose pneumonia quicker than any doctor or medical test. Their new invention has giving them a ray of hope against an infection which takes the lives of more children around the world than any other disease.

Pneumonia causes 15pc of all deaths in children under age 5 worldwide – 2pc of which are newborns.

From Tragedy To Life-Saving Idea

The idea came to the engineer Olivia Koburongo, whose mother had to be shuffled from one hospital to another before her condition was successfully diagnosed.

The death of her mother made Koburongo think of others in a similar predicament as her. She ended up devising an idea of a ‘smart jacket’ for rapid discovery of pneumonia.

She took her idea to a telecommunications engineering graduate Brian Turyabagye, and along with the team of very competent doctors, they came up with the ‘Mama-Ope,’  meaning ‘A Mother’s Hope.’ The Mama-Ope kit consists of a biomedical smart jacket and a mobile phone app which connects and carries out the diagnosis.

the Mama-Ope Kit is an easy to use device. The nurses/doctors only have to make the child slip into the jacket. The sound sensors then pick up the breathing patterns from lungs as well as the body temperature of a child.

“The processed information is sent to a mobile phone app (via Bluetooth) which analyses the information in comparison to known data so as to get an estimate of the strength of the disease,” – Turyabagye

As per the studies done by its inventors, this jacket is currently a prototype; it can diagnose pneumonia 3x faster than a doctor and ends up reducing possible human errors.

Currently all the doctors use a stethoscope to listen for anomalous hissing or bubbly sounds in the lungs. However if doctors suspect malaria or TB – which are also directly connected to respiratory distress – the time gone while treating these two wrongfully diagnosed diseases rather than pneumonia, may prove deadly for the patient.

It is hoped that the Mama-Ope kit goes from prototype stage to a product that is ready to be deployed on a wider scale globally. These kits can be reused, helping save untold but massive costs attributed to misdiagnosis of life-threatening diseases. Be it Uganda, Pakistan or any other developing country, this smart jacket can potentially become the game-changer in the fight against pneumonia.