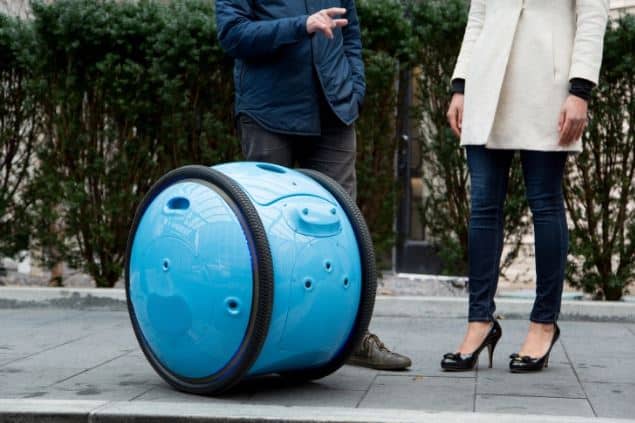 Remember the Vespa? The eccentric, little, blue-colored (mostly), scooter motoring through the narrow every nook and cranny of the city?

Well, the Italian-made scooter’s manufacturer, Piaggio, is back with another similarly outlandish-looking product. This time, however, their device can drive itself and is called “Gita”.

Piaggio has revealed a personal delivery device known as “Gita”, which means “trip” in Italian. It is a colorful little wheel-shaped autonomous robot that wants to carry around your groceries for you. It has been developed by Piaggio Fast Forward, a startup within Piaggio’s group of brands.

The idea behind Gita is that it can carry your luggage for you. Standing at just over two feet tall, Gita is capable of carrying up to 40 pounds in a large central compartment.

The robot can just follow you around using its embedded sensors and cameras and you can take your stuff anywhere you want to. The little bot can match your pace and trudge along happily behind you. It has a maximum speed of 22 miles per hour, enabling it to keep up with a person riding on a bike as well. Moreover, it can also navigate autonomously around an environment it has already mapped— making it a viable option for delivery companies.

A display on the compartment’s lid can show you the device’s battery charge and a built-in LED helps to keep the bot visible in the dark. It also comes with a biometric sensor to make the whole experience more secure and seamless.

The company plans to launch Gita officially on the 2nd of February, in Boston, City in Massachusetts, U.S. Piaggio has taken a more “grounded” approach to using autonomous devices to deliver products, unlike Amazon. The online retailer giant has been long since working on using drones to make deliveries, delivering its very first package in December of last year.

While considerably faster, there are still a lot of issues that need to be sorted out before drone-delivery can be a viable option. In the meantime, options like Piaggio offer an interesting way to deliver stuff around.