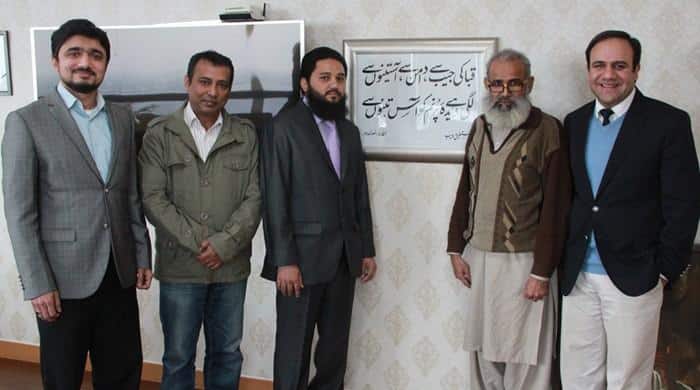 A father-son calligrapher duo, Nasrullah Mehr and Zeeshan Mehr, have launched a new Urdu font for the internet. Named Mehr-e-Nastaleeq, it has over 10 years of efforts behind it.

Up until now, ProPakistani had been making efforts in pushing developers and calligraphers to help Urdu progress online by developing web-centric high quality and lightweight fonts. It seems the efforts are finally paying off. If you want to take a look at what’s necessary to promote Urdu and what type of fonts to develop, click the link below.

Read More: It Is About Time We Create Standardized and Internet-Ready Urdu Fonts

Nasrullah Mehr is an award winning calligrapher. He’s been in the business for around 30 years with his art being showcased in various magazines, newspapers and books. With the advent of the internet age, his business slowed down.

His son, Zeeshan Mehr, joined the family business at this point and learned computer programming. This was so he could make a new font for users on the internet which would be more refined than the current fonts.

Mehr-e-Nastaleeq font uses the advanced OpenType Font (OTF) technology which allows for more advanced typesetting features (smallcaps, alternates, ligatures and others inside the font rather than separate expert set fonts).

Works on Windows, Android and Linux

It contains approximately 450 glyphs including symbols and English support (writing English in Urdu font). Any platform that supports OTF will support Mehr-e-Nastaleeq font. This includes, Microsoft Windows, Unix, Linux, and Android among other operating systems.

It also allows for web publishing and electronic communication using current software which support OTF specifications. This means it can work on Google Chrome, Internet Explorer, Mozilla and Safari without requiring a separate plugin. It will be just like writing on Inpage Urdu.

Mehr-e-Nastaleeq has been licensed by a US based non-profit Creative Commons as well.

Here are some of the features specific to this font:

You can view a sample of this font here.