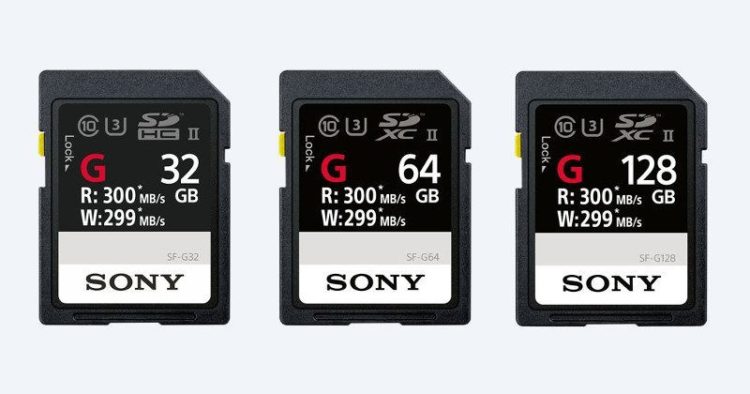 Sony has announced a new series of their UHS-II SDXC cards dubbed the SF-G Series which come with the claim that they are the “world’s fastest SD cards.” The cards will  come in storage capacities of 32GB, 64GB and 128GB and promise write speeds up to 299 megabytes and read speeds up to 300 megabytes per second.

The memory cards will not only be useful for a smooth video recording experience at 4K resolutions but also for transferring large amounts of data to or from your computer. Alongside the memory cards, a card reader was also announced that is built specifically for the SF-G series memory cards which features a SuperSpeed USB (USB 3.1) A-type port for high speed data transfers to and from your PC.

300MB/s read speeds are nothing new as it was first achieved by the Lexar Professional 2000x which debuted back in late 2015 but it “only” had 260MB/s write speed. The goal of almost 300MB/s write speed has now been achieved by Sony. According to Sony, a new algorithm was developed by the company that will not only allows faster write speeds but also result in faster burst shots and quicker image saving.

To top it all off, the cards are also waterproof, x-ray proof, shock proof and temperature resistant. And if you also happen to accidentally delete your photos from the card, all three SF-G cards are compatible with Sony’s file rescue software.