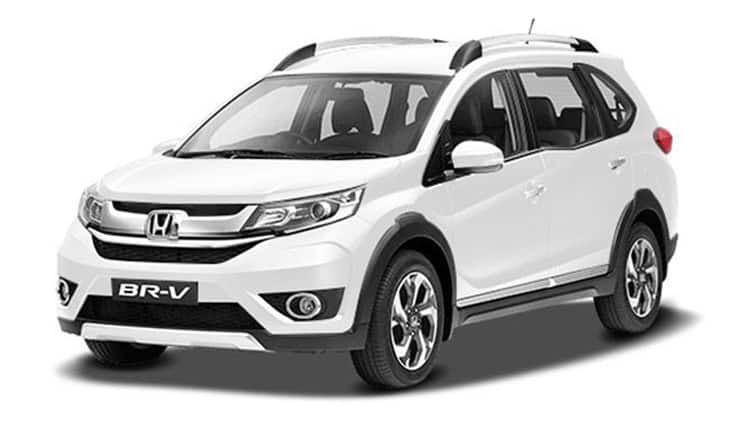 Honda’s newest sports utility vehicle is here. The BR-V SUV might just be the thing that ensures that Honda makes some inroads in the Pakistani automobile market for SUVs, a market that has been traditionally dominated by Pajeros and Hilux here.

The company recently launched Honda BR-V (Bold Runabout Vehicle), a 7-seater that bears an uncanny resemblance to Mobilio; which did very well in terms of sales.

The BR-V plays to Honda’s strengths. The vehicle is hugely practical, spacious and solid. In terms of class, it ticks most of the boxes to overcome slight deficiencies.

The two variants of Honda BR-V to be launched in Pakistan include:

Lets take a look at the features of the BR-V.

Honda has given BR-V a simplistic look, especially from the sides and has put all of the usual ‘urban SUV’ elements into the package. The vehicle has a ground clearance of 201mm, roof rails, black plastic cladding along the bumpers, sides & wheel arches and faux skid plates at the front & rear.

When viewed from the front, the company has done fairly well to distinguish BR-V from its siblings while maintaining the general shape. Round fog lamps get prominent chrome bezel and it adds to more style. The clamshell bonnet is very different from what Honda offered with Mobilio; perhaps even a bit too short for the length of the car.

The chrome door locks adds more attraction to the vehicle. Request sensor is also provided in BR-V. However, it is only available for the driver’s side only.

A large silver roof rail is equipped on roof of the vehicle to give it more sturdier look.

On the back side, split tail-lamps provide BR-V with attractive design. Whereas other vehicles get a regular light bulb, the BR-V is equipped with C-shaped pilot lamps (LED). Black cladding continues along the rear bumper with a skid plate. The BR-V features reflectors on both sides but does not offer rear fog lamps or reverse parking sensors.

Overall, the BR-V, is almost 4.5 metres in length and weighs in at about 1.2 tonnes.

The interior is much different from the car it is based, the Mobilio. Honda has opted for all-black theme for the interior of BR-V, with silver inserts at various places. Although the all-black interiors are much more graceful, most of the competitors have adopted the black & beige theme. 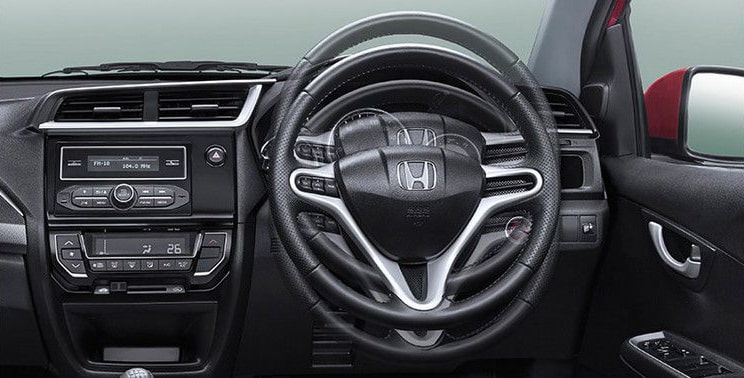 The new dashboard is said to be better and much more contemporary. The BR-V has no reverse camera, no satellite navigation or even a touchscreen but there is Bluetooth connectivity available along with steering controls and electric mirrors. From customer’s point-of-view, these features left out are far more appealing than ones that are being provided.

Quality of the plastic parts inside the BR-V are mediocre; it may be acceptable on entry-level sedans but it isn’t on a SUV with variants costing well over 2 million rupees.

Leg room and head room is adequate. However, the cabin room is somewhat limited.

The front seats are designed supremely well with white stitching, giving it a premium look. The seats are spacious but large people might find themselves in a position where they might be a little uncomfortable. The seats provide adequate back support and are firm to sit on. 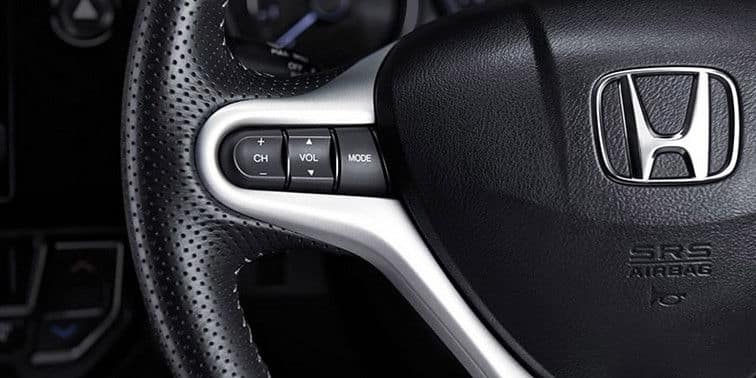 Like most Honda vehicles, the ergonomics are on-point. The interior is much more user-friendly. Dashboard controls are all easy to reach and center console is angled towards the driver. 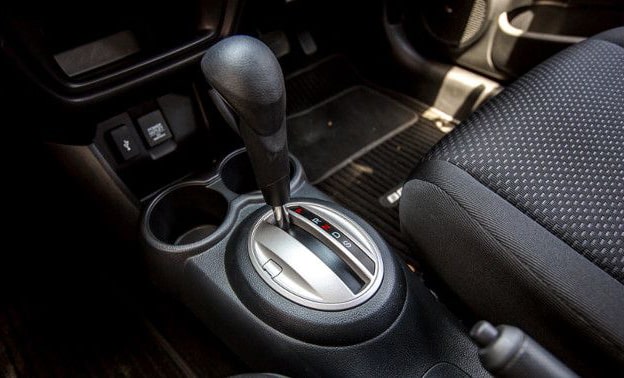 Similar to the Amaze, City and Jazz,  BR-V AT comes with a CVT (continuously variable transmission). The CVT normally has lesser moving parts and is much lighter, when compared to the traditional AT.

Compared to its siblings, the drive of BR-V is much better as it offers tremendous balance and road grip. The suspension does well to absorb most of the road bumps in an effective manner. 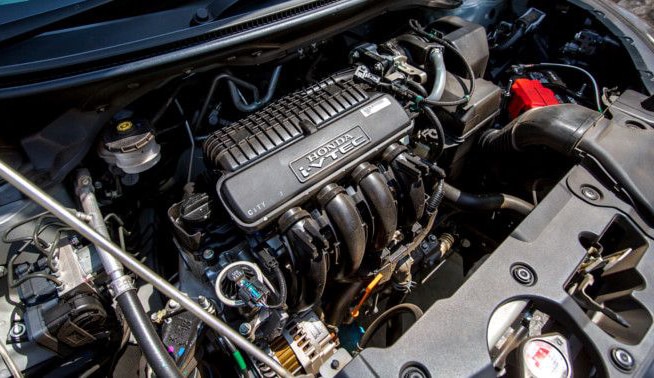 The BR-V AT has steering-mounted paddle which allows drives to access 7 virtual gear ratios. The gearshift indicator on the instrument cluster highlights which gear the driver has selected for the time being.

Unlike previous models, the BR-V isn’t equipped with ECON button, which enables drivers to maximize fuel-economy.

In comparison with other SUVs, here are the Honda BR-V specifications:

An informational leaflet is attached below courtesy of Honda Center Rawalpindi: 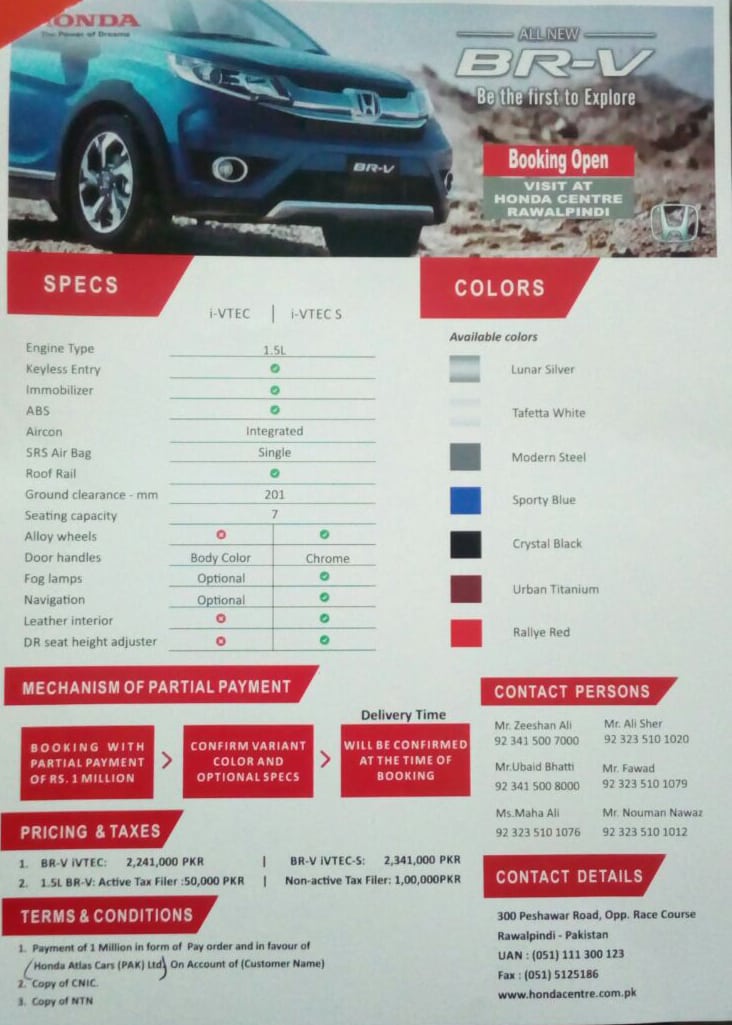 Sources indicate that due to an overwhelming response, deliveries of BR-V has been delayed to September. The sources also claim that over 100 BR-Vs have been booked already.