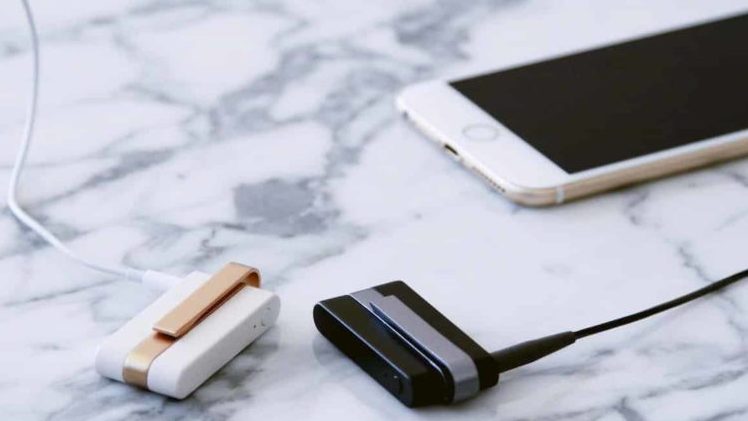 As Apple also moves towards a “jack-less headphone” future with the introduction of the iPhone 7, more and more users are concerned about the way they will keep track of their headphones. Furthermore, even before Apple’s iPhone started this, popular Android phone makers Like Motorola had already started ditching the headphone jack in favor of Bluetooth and USB Type-C headphones.

Now come every phone announcement, users are worried whether their beloved headphone jack would still be there or not.

However, consumers need not be concerned about this anymore since the company, Podo Labs, has made a new device that connects your headphones to it with wires and to your phones via Bluetooth. Thus a wireless connection is created with your phones.

The “Jack” For Your Phone

The device, “Jack,” is very simple to use and smaller than a credit card but packed with plenty of features. Any type of headphones can be plugged into this device and paired with your smartphone via Bluetooth. The device is clip-on so its quite easy to just attach it to your shirt, bags, or even to just put it in the pocket.

There are some other pretty nifty features the Jack brings to the table:

Podo Labs says the Jack supports Bluetooth’s “aptX” technology, which can “CD quality” music over Bluetooth. The battery life for this device is pretty good too, it can last 12 hours on average on a full charge.

Backed by Funded Today and Kickstarter

Podo Labs is currently trying to raise money for “Jack” by partnering up with Funded Today for more backers than they will receive at only Kickstarter, which is also where they are trying to get funding from.

The introduction of the device into this market has been met with great enthusiasm and the Kickstarter campaign has already managed to gather more money than the goal the company had set out.

“Jack” is a great device for all those people who want to keep using their wired headphones rather than shift to the alternative headphones that Apple introduced with the iPhone 7.

Price is currently set at $29 for a single pre-order of Jack. If you are willing to pay $49, you can get two Jacks or one Jack with a set of premium headphones and a carrying case. Similarly, the more you’re willing to pay the more gadgets you get. When the gadget goes on retail after the campaign, the price is set at $40.

You can get more info on the price and Jack at its kickstarter page here.

Shipping to all countries including Pakistan is available.