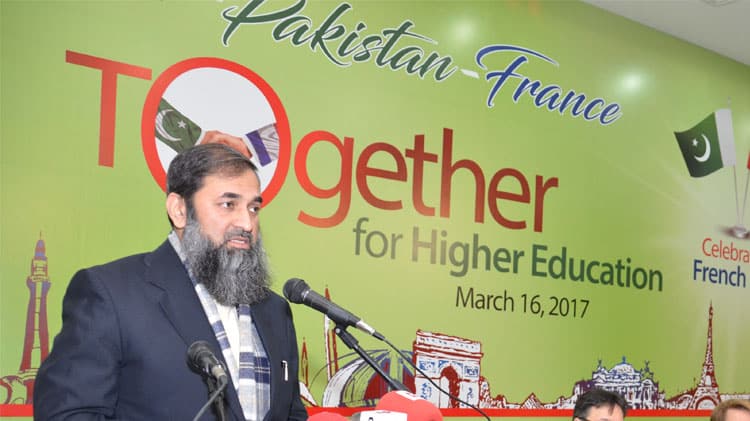 The Higher Education Commission (HEC), Pakistan in collaboration with Embassy of France and Campus France celebrated Pak-French cooperation in higher education at the Commission Secretariat here on Thursday.

Speaking on the occasion, Mr. Baligh-ur-Rehman said that higher education and research are of vital importance for socio-economic development of a country in this modern era. He said Pakistan and France enjoy cordial relations, and celebration of French Day in Pakistan  will strengthen the bilateral relations. “French universities are among the world’s best higher learning institutions. I hope these collaborations will help Pakistani universities and scholars to learn from their French counterparts.”

Appreciating the role of HEC, the Minister said the successes in tertiary education sector can truly be attributed to HEC’s policies and strategies which have been augmented and supported by the current government in the way which was unprecedented. “We still have a long way to go for development of the sector,” he maintained.

He said the Government has been seeking promotion of education, elimination of extremism, end to energy crisis, and economic growth. “The country has witnessed a significant progress in all these areas,” he asserted.

Describing the background of academic collaboration between the two countries, Dr. Mukhtar Ahmed, Chairman HEC informed that the Commission has so far sent over 700 students to France for studies. He said about 450 students have returned and are serving the country. He welcomed 21 delegates from French educational institutions on their visit to Pakistani universities and hoped that mutual collaboration will into a strategic partnership.

The Chairman said that work on the plan to set up a French university in Pakistan is underway. He said it is high time to usher a new era of collaborative research and student exchange programmes. He informed that Pakistan and France are planning to organize a conference on Archaeology in Lahore soon, and a similar exhibition will also be held in Paris next year.

Shedding light on the HEC initiatives for uplift of higher education, he said the number of universities in Pakistan has reached 182 since the inception of HEC. He said the Government is committed to pay due importance to higher education sector. He revealed that quality of education, access rate, and solution-oriented research are the main concerns of HEC. He said HEC is taking vital steps to cater to the need of qualified faculty, adding that steps for the capacity building of HEC employees are also afoot.

In her remarks, Mrs. Martine Dorance, Ambassador of France to Pakistan said France and Pakistan have forged a strong and long-lasting agenda of cooperation in academic and scientific fields. She said that over the past years, hundreds of Pakistani students have obtained their PhD in the best French higher education institutions. She said free access is offered to foreign students by the French Government, adding that Pakistani students are most welcome in the country.

She said France reframed its partnership with Pakistan in the field of scientific cooperation in 2015 by launching Pakistan-France Joint Research Programme (PERIDOT). She noted that these synergies create a large community of interest that is also supported by the Pakistan-France Alumni Network which is now connected to France Alumni, a global network. “I have no doubt that this major event will strengthen the partnership between our two countries, and will bear concrete fruits and create a sustainable academic cooperation, and bring more Pakistani students to my country,” she said.

Mr. Noor-ud-Din Manamani said that Campus France is committed to promoting higher education in foreign countries by welcoming foreign students. He said Campus France has 255 offices in over 124 countries of the world which are busy facilitating students aspiring to study in France. He said Pakistan and France need to expand joint collaboration to provide academic opportunities to youth.

The opening ceremony was followed by panel discussion on French Higher Education System and the Pak-French Collaboration in Academics and Research. Later on, Matchmaking Sessions were held which were based on the French universities’ coordination with Pakistani universities for collaboration in areas of mutual interest.