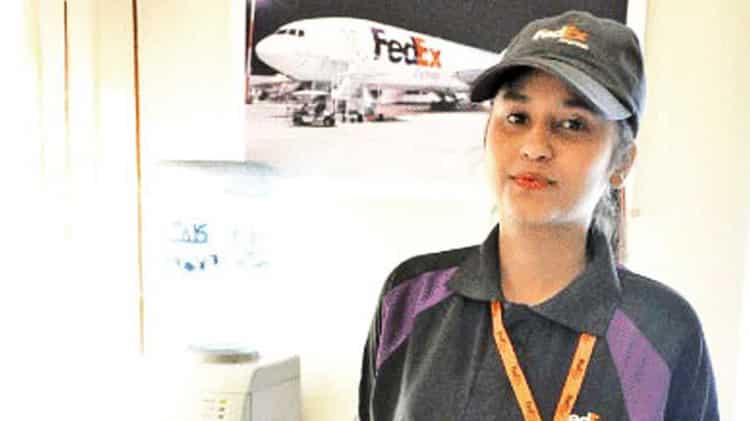 There is no denying that majority of the people still refuse to acknowledge that gender imbalance in our society. Women often find it difficult to make a sizeable impact as there are many factors – gender bias being one – that limits their potential.

One 19-year old, Aisha Siddiqua from Karachi is hoping to break the gender stereotype by becoming a female courier, a job that has traditionally fallen on the male segments of the society in our part of the world.

Even at her young age, she just wants to pave the path for others like her.

Ever since Aisha cleared her Higher Secondary School Certificate in Commerce, she has been collecting packages and delivering them for a courier company for past two months.

Aisha’s mother works as a banker whereas her father is a lawyer by profession. Speaking about her parents, Aisha said:

Young women often don’t get support from their families owing to prejudices but I was lucky enough to have parents and siblings who boosted my morale.

She contemplated but could not understand why every company had men as couriers. It was then when she finally decided to apply. She added:

I went through rigorous training, because the whole system is digitized and one error can disrupt operations elsewhere, because couriers in other parts of the world rely on us.

‘People Receiving Parcels From Me Mostly Get Shocked’

Aisha’s typical working day starts at 9 am sharp. Her first step of daily work includes sorting out the packages beforehand, which are to be delivered a little after 12 pm.

After delivering items, she picks up consignments that are to be sent from the city to other places and then her shift ends, at 7 pm.

Aisha usually operates in the posh Clifton and DHA areas in Karachi. However, that doesn’t limit her as she also covers areas such as Gulshan-e-Iqbal in the sprawling metropolis.

People receiving their parcels mostly get shocked because they don’t expect to see a girl, but many women have inquired about my job and some have even shown an interest in becoming couriers themselves.

As opposed to men delivering items on the bike, Aisha makes her trips in a car accompanied by a driver.

I’ve just started, so I’m happy that I’ve at least taken a step. I do know how to drive, and if need be, I’d drive around as well because now I’m able to design the route according to our deliveries.

I won’t mind riding a motorbike either, because I think while there’s a chance of encountering an unpleasant situation on the road, I feel I’d be able to handle those who might want to bother me or try to get in my way.

Aisha hopes that women riding motorcycles and delivering packages around the country will become a common sight.