Panic gripped the commercial hub of Pakistan as huge queues of cars and motorbikes were observed at different petroleum pumps, following the news of oil tankers on strike spread around the city.

Petroleum products were finished in some outlets of different Oil Marketing Companies (OMCs) besides Pakistan State Oil that possess a wide network of oil tankers and petrol stations.

Oil Tanker Contractors Association Chairman Salman Tareen said that the strike was called due to the rise in General Sales Tax rate on contractual services made by Sindh Revenue Board (SRB). 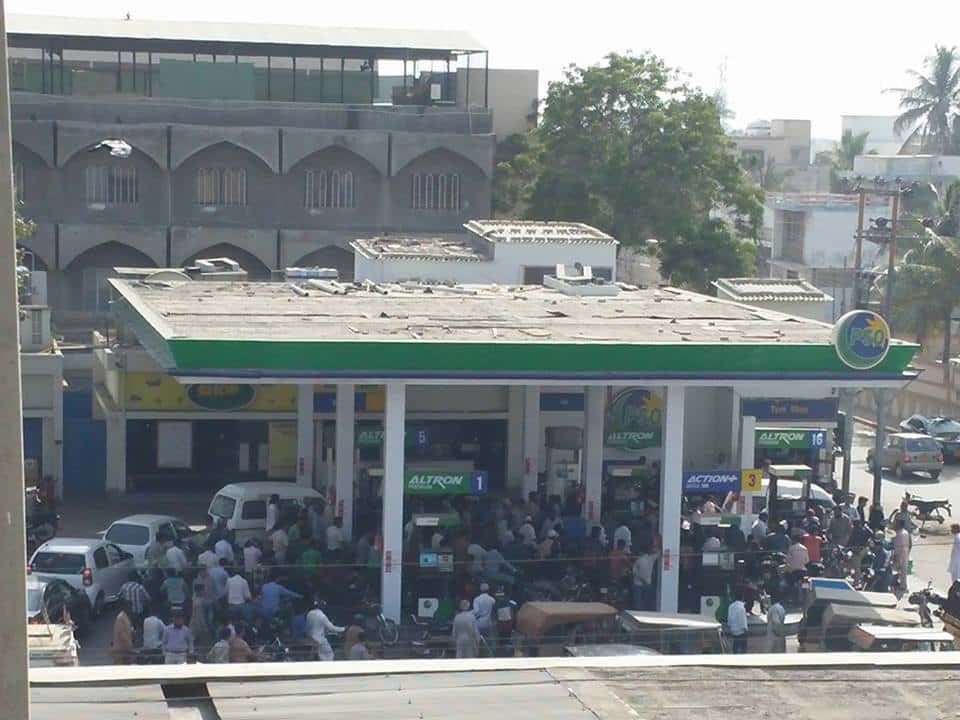 Accordingly, the tax rate has been increased to 13 percent for all filers and non-filer contractors, which was previously 6 percent for filers and 15 percent for non filers. The high tax rate is bringing their margins to almost none, making the case of business not viable, he added.

“If combined, the sales tax for all provinces sums up to sixty-four percent,” Tareen said.

The supplies of petroleum products in Karachi and different cities of Sindh, however continued due to oil tankers associated with PSO.

PSO has issued a statement said:

“Despite the fact that the strike is not against PSO and the company has no stake in the matter, PSO’s supply chain is highly vigilant of the situation. The company is striving hard to ensure that the supply of petroleum products will continue across the country without any hitches. PSO further reiterated its commitment to maintain an uninterrupted supply of fuel to meet the country’s fuel and energy needs under all circumstances.”

According to an estimate, 8,000 oil tankers out of nearly 12,000 are supplying products to PSO pumps uninterrupted which could rule out any worrisome situation in Sindh. On the other hand, petrol pumps of different OMCs may witness shortage of petroleum products in the next couple of days as their supplies were cut off totally because of the tax issue with the provincial government of Sindh.

He was being quoted by the local media that more than 10 percent of the privately-owned petroleum pumps went dry and more will likely follow from tomorrow evening.

Ministry of Petroleum and Natural Resources (MPNR) called upon a meeting with the relevant stakeholders including association representatives and the officials of Sindh Government, which may settle the issue of oil tanker contractors.

After the 18th Amendment to the Constitution in April 2010, the provinces were delegated with the powers to collect sales tax from the federation. Sindh Revenue Board was the first to start functioning followed by Punjab, KP, and Balochistan.