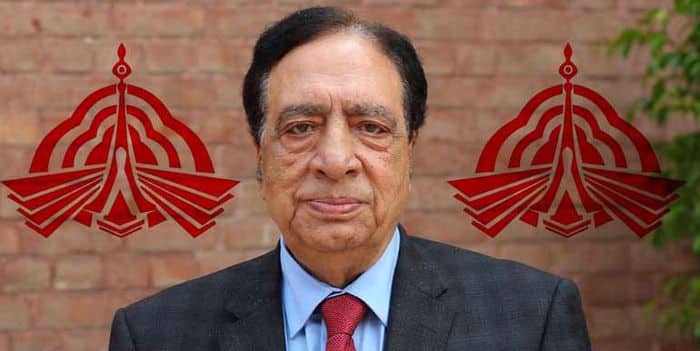 Atta ul Haq Qasmi, Pakistan Television (PTV) Chairperson, recently called the board of directors for a meeting where he passed a resolution appointing himself as the Managing Director of the state-run television.

On Thursday, Senator Farhatullah Babar revealed this piece of information during a meeting of the Senate Standing Committee on Information, Broadcasting, and National Heritage. This came as a huge surprise and shock to members of the committee, who immediately termed it as illegal.

The former Managing Director of PTV, Mohammad Malik, retired from active service on February 28 last year after completing his tenure. The position has since been vacant though some officials of the Information Ministry have held the position temporarily.

More than a year has passed and the Ministry of Information has still not found a suitable candidate for the post.

Being an author, senior columnist, and absolutely loyal to Pakistan Muslim League-Nawaz, Qasmi was given the position of Chairperson in December 2015, and became the oldest Chief in PTV’s history at 72 years of age.

Qasmi is the oldest Chairperson in PTV’s history

Senator Farhatullah Babar also said “It has come to our knowledge, about 10 days ago, that Qasmi called a meeting of the PTV’s BoD in which a resolution was passed to formally appoint himself as MD of the state-run television channel and it was signed by the board members,”

Even the committee Chairperson, Kamil Ali Agha, supported the senator, stating that this news was a shock to him and he had no idea about this as a major reshuffle of staffers has been going on since he took over the position.

Agha also went on to clarify that both positions were very different in their duties because the chairperson has to deal with matters related to policy while the Managing Director is the executive head and in control of everything that goes in PTV.

Nihal Hashmi of PML-N tried to sort out the issue and downplay the situation while Maryam Aurangzeb, Minister for Information, and the Ministry’s Secretary, Sardar Ahmed Nawaz Sukhera, were grilled by the senators on this issue.

The Minister for Information has confirmed that she was aware of the ‘illegal’ development and that the decision will be reversed and a new MD selection process will begin next week.

The act has been deemed illegal and Senator Babar has asked Maryam Aurangzeb to clarify the matter and whether or not she had any knowledge of it. Babar also suggested that the illegal Managing Director should not be allowed to take any action till the matter has been resolved.