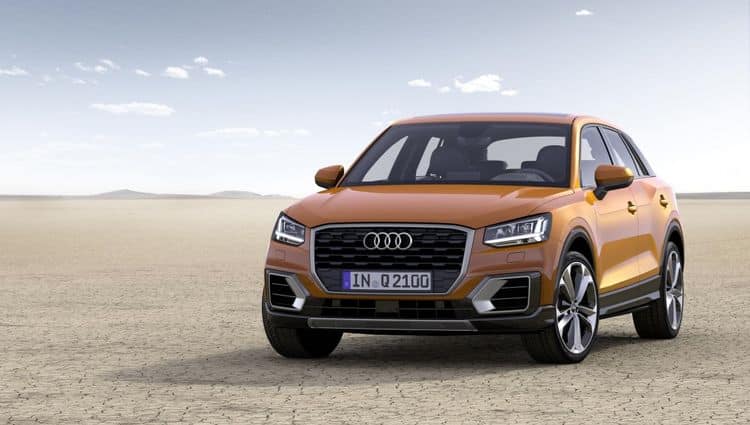 Crossover SUVs have become a thing of late as every manufacturer seems to be focused on outing such vehicles. Audi, competing against BMW, Mercedes-Benz and other luxurious brands, has just released Q2 in Pakistan.

Audi is targeting a different audience as compared to Q3. The Q2 is smaller and can be called a ‘Mini’ Q3 and it also sits well below Audi A3 hatchback. It’s competing against the likes of BMW X1, Honda HR-V (or Vezel), Toyota C-HR, Suzuki Vitara and more.

It comes in three trims – SE, Sport and the high-end S Line

Since it’s an Audi, Q2 makes up for its higher price with a more premium interior, but does it justify the 4.35 million price tag it carries? Let’s take a look at what the crossover SUV has to offer.

Q2 is new to the market, and Audi has moved away from its general styling trend with sharper, less curvy looks and an unusual sense of proportions all across. The car is shorter and lower than the Q3. This is the first car designed under the leadership of new design boss Marc Lichte.

A chamfered cut is running down the length of the passenger compartment instead of the popular tornado lines. The traditional Audi grille has also seen a design change with egg-shell like inserts refreshing the older look. Roof edge spoiler at the back is also a nice touch to the finish.

Up front, there’s full LED lights, a feature commonly seen in higher end models of most cars. Audi also added a power tailgate, which comes as a standard. 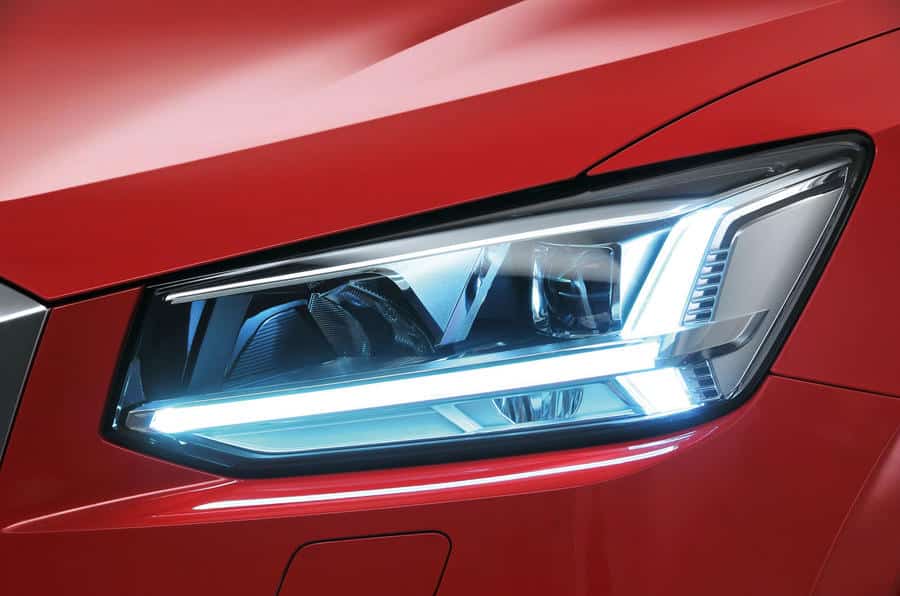 It comes with 11 color options, four options for the D-pillar and five alloy rim designs including larger ones. There are some other exterior customization options as well.

Q2’s dashboard is a mixture of buttons, rotary controllers and an infotainment screen, which supports Android and Apple smartphones. An optional wide screen is on offer too. 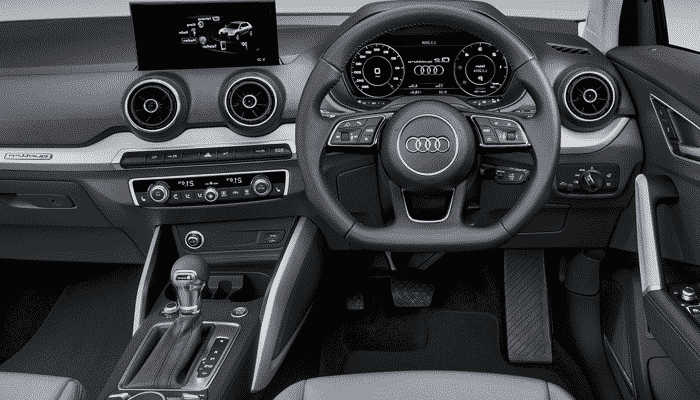 Virtual Cockpit is another Audi exclusive which replaces standard speedometer and tachometer with a customizable 12.3-inch display to highlight prioritized info and give a futuristic feel while driving. It comes with a Head-up-display (HUD) so all the important info is right in front of the driver.

There are loads of other options as well, including a Bang & Olufsen speaker unit which takes up about 20 percent of space in the car’s boot space.

Q2 comes with ample space for 4-adults to sit comfortably.

The trunk space can accommodate up to 14.2 cubic feet of luggage space in the back.

It’s less powerful than the other variants but it makes up with fuel efficiency and less noise. Q2 sports a turbocharged three cylinder direct injection with indirect intercooler and DOHC. Four-wheel drive is also not available in the Pakistani model.

There are five driving modes in Audi Q2. You get to choose between auto, dynamic, efficiency, comfort and individual. These modes can alter the way steering, gear shifts and suspensions normally work.

You get the standard 7-speed S Tronic automatic transmission in Pakistan.

Its engine is capable of the 85kW and 200Nm output from a displacement of 999cc. Top speed is stated as 197 kmph for the Pakistani variant while Audi claims it can reach 100kmph in just 10.3 seconds.

Ground clearance stands at about 15cm above ground level.

Audi’s Pre-Sense safety kit is available as a standard across all trims. It includes the Autonomous Emergency Breaking which applies brakes as soon as it senses a pedestrian in front of the car.

Some important features are listed below:

With a low-powered engine, Q2 can offer better mileage compared to its other variants. Audi claims the car can travel 16.4km/l to 19.6km/l depending on the buyer’s choices, like tyres etc.

The standard set of features available all across the three ranges are listed below: 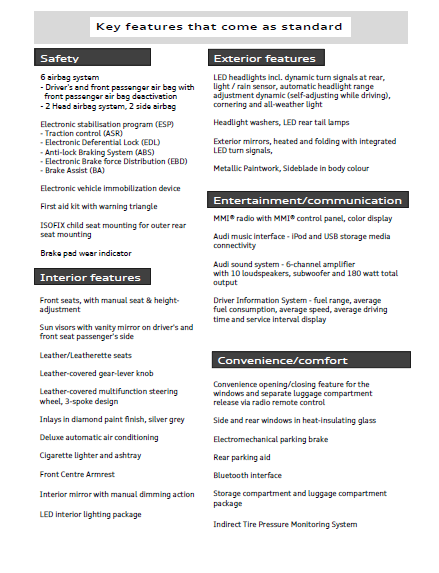 Audi Q2 has been released with a higher price tag in Pakistan. While its available globally for around $30,000, Pakistani rates are about 30 percent higher. This has put the crossover SUV at a slightly odd position considering that A3 can be availed at a cheaper price while the bigger Q3 doesn’t have that big of a price premium either. The two points going in favor of the Q2 are its superior mileage and different looks compared to other Audi models.

The car is priced at 4.35 million in Pakistan. On the other hand, the higher-end exclusive version goes on sale for Rs. 4.85 million. The car can be acquired through authorized Audi deals in major cities of Pakistan.

Optional features cost extra as shown in the price list below: 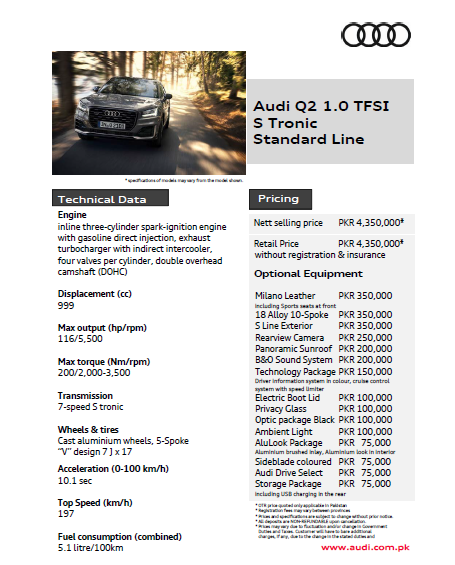 The complete specifications for Audi Q2 can be viewed here.