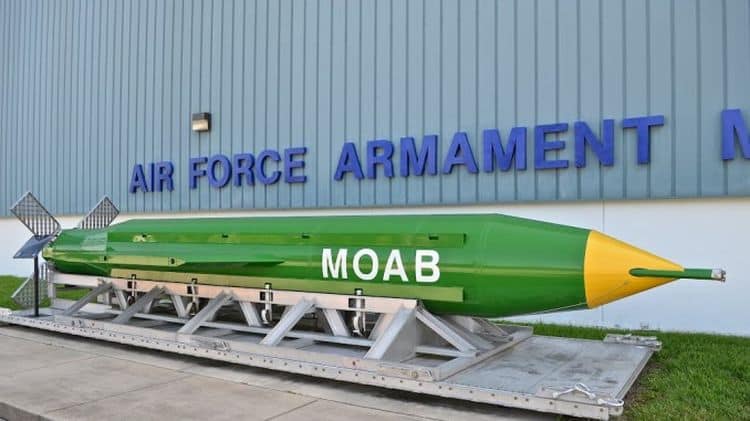 On Thursday, US forces attacked Da’ish’s underground tunnel complex close to the eastern Afghanistan border. World’s largest non-nuclear weapon, “Mother of All Bombs”, was dropped in the area to eliminate the enemy network.

Most of our readers obviously have some questions in mind regarding the MOAB. Hopefully, the details below will answer most of them.

What is Mother of All Bombs?

Mother of All Bombs or MOAB (Massive Ordnance Air Blast) weighs about 10 tonnes, is armed with nearly 8,000 kgs of explosives and is often referred to as the most powerful weapon without nuclear capabilities. Its explosion is equivalent to 11 tonnes of TNT. US military claims it has a blast radius of over one kilometer.

The large yield conventional weapon is GPS-guided and was first designed in 2003 by the Air Force Research Lab for the US Military.

MOAB is more than 30 feet in length and one meter wide. In comparison most conventional bombs weigh about 250 kgs.

For this very reason, a bomb of such physical dimensions cannot be deployed using traditional means. It is carried in a cargo plane and sucked out of its cabin area on a pallet using a large sized parachute. Once out, it is guided by the satellite to hit its target with remarkable accuracy.

Model number for the bomb dropped in Afghanistan was GBU-43/B. It was dropped using an MC-130 cargo plane.

How is Different to Other Bombs?

According to US defense researchers, the bomb is designed to take out fortified targets which are otherwise unreachable. It can be used in caves, tunnels and canyons.

Such weapons are classed as thermobaric – a type of explosive that uses oxygen from the surroundings to generate an intense and hot blast wave with an absurd level of energy in a localized area.

Where most ordinary bombs are a mix of fuel and oxygen generating material, thermobaric types are almost all fuel and no oxygen. This quality allows MOAB’s intensive blast wave to travel through any place that has oxygen including tunnels.

Why Is This the First Ever Use of This Bomb?

MOAB’s thermobaric characteristics and vast destruction area are believed to be the two major reasons which prevented its use until now. It was shipped to Iraq but was never used.

Most of the US battles until now have been in congested areas which made it impossible to use MOAB without causing colossal collateral damage.

Analysts are of the view that the primary reason that the US has only now used the bomb is because the target consisted of tunnels and caves which could only have been destroyed using a weapon of such power.

The area where the bomb was dropped in Afghanistan’s Achin District of Nangarhar, near the Pakistan border. It’s a desolate area with little population.

Is This The Biggest Conventional Bomb?

Despite MOAB’s destructive capabilities, it is theoretically still second to the Massive Ordnance Penetrator (MOP), which has never been tested in a battle.

While MOAB detonates moments before hitting the surface to allow it to destroy building and underground structures, MOP is able to penetrate deeper and can even take out underground military bunkers.

On the other hand, Russia has a bomb referred to as the “Father of All Bombs (FOAB)”. Developed in 2007, FOAB is four times small than MOAB but is capable to twice the destruction. However, FOAB is still to be tested in any warzone to confirm the claims.

Experts believe that the US could have opened the Pandora ’s Box and it’s possible that the current blast was just the first. Russia and the US could end up using more weapons of mass destruction against militant groups or hostile nations.

The damage caused by the MOAB is yet to be confirmed by the US military but the toll is expected to be high.