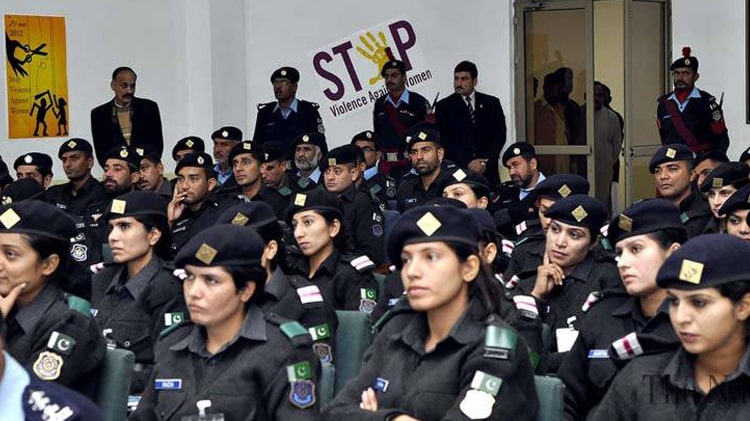 Recent governments have formulated various laws that aspire to the goal of protecting women’s rights in all arenas of life. However, this has not translated into increased participation of females in the police force where the percentage of women in the country’s police force is still below two percent.

This shocking statistic was revealed in a recent report compiled by the National Police Bureau. The report quotes officials who say that data shows a total of 391,364 policemen/women all over the country, but only 5731 of them are women.

The report also reveals that Gilgit-Baltistan is the territory with the highest female participation in the police force at 3.4 percent as compared to other regions and provinces in the country. In fact, the percentage in one province even drops to as low as 0.48 percent.

The most common reason for this low rate of participation by women is thought to be restrictions due to cultural norms and traditions. However, officials also cautioned against quick dismissal of this matter. They believe that low participation by women in law enforcement agencies is also due to an absence of  official support.

Ideally, according to officials, the percentage of women in the police force should be at least 10 percent.

The situation is so grim that there is only one inspector, one sub-inspector and one female assistant sub-inspector in the force as a majority of the women are serving as constables.

In the capital city, Islamabad, the condition was a bit better but could hardly be called acceptable since only 278 women were in the police force of the city. This makes up barely 2.8 percent.

According to the report, in Azad Kashmir only 1.6 percent of the police force is made up of women given that there are merely 129 women in the police force of 8325 people. It’s worse in Khyber Pakhtunkhwa where the percentage is just one percent with only 683 women working in the entire force of 68,106 personnel.

The good news, though, is that the number of policewomen in the force has steadily improved from 0.94 percent to 1.46 percent all over the country.

The Director-General of NPB Iqbal Mahmood commented that while the situation is not satisfactory it is certainly improving.

Before blaming any individual or institution for the current situation, young female graduates have to take an initiative to opt for policing as a profession.

Currently a Superintendent of Police (SP) in the Karachi Traffic Police, Erum Awan, agreed with the above statement that there was an apparent and obvious lack of interest in educated women for the profession. She also said, though, that there were other reasons for the negatively thought profession.

First, the girl’s family advises her not to join the profession.

Even if one dares to join the profession, she doesn’t encourage others to follow suit. That’s because even in this era, women personnel are not awarded key postings or regular policing jobs. They are always considered as a secondary part of the force in comparison to men.