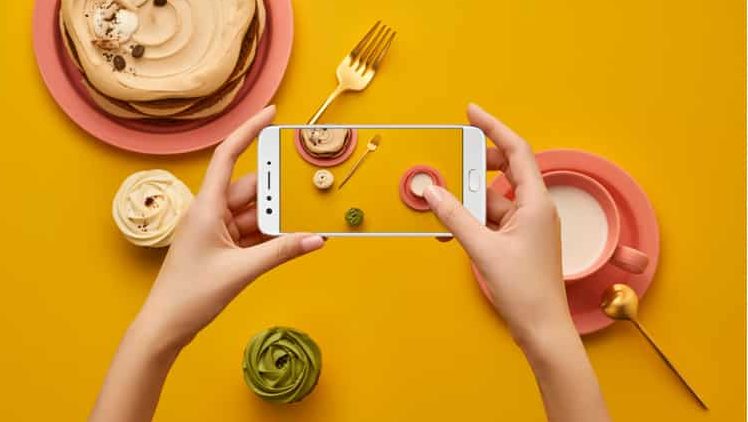 Oppo wants to become the top cameraphone brand in the market and its decision to offer customers what they need, instead of crunching theoretical benchmarks, is certainly paying off. The company is now the 4th largest Smartphone maker in the world and its F series has taken center stage as its premium line.

Earlier this year, Oppo revealed two new camera technologies and showcased them at the MWC – new camera stabilization tech and a 5x optical zoom feature without any physical movement.

Following the release of Oppo F3 Plus in Pakistan, the company unveiled the smaller F3 Selfie Expert a few days ago. It was released in Pakistan the same day it launched in the international market.

ProPakistani was present at the launch event and we promised you a complete review of the device. Let’s get on to it and see whether the younger sibling of the F3 Plus can keep up.

F3 comes in standard minimalistic packaging. Pakistani buyers get the following items in the box:

Since the Oppo F3 is just a mini variant of the bigger Plus version, the design similarities are pretty obvious. It has the same metal back and curved Gorilla Glass 5 at the front. The front is also similar and you get a fingerprint sensor under the screen with a couple of capacitive keys on its sides and the sensors plus the ear piece above the screen.

From the rear, however, the phone is slightly different from its bigger sibling. F3 Plus had three antenna lines running across it at the back, the F3 only has a single antenna line. The LED flash is also placed slightly away from the 13MP camera sensor.

The phone features the two volume keys on its left while the right makes room for the power button and the dual-SIM and microSD card tray.

One thing we noticed and really liked about the F3 is that despite 7.3mm of thickness, a 5.5-inch screen and a metal back, its very grippy. You never feel that you have a loose grip and the soft touch feel makes the phone pleasant to hold in the hand. Thanks to the small bezels on its sides, even people with tiny hands won’t have any issues using this device.

Similar to the Oppo F3 Plus, the display protrudes slightly from the metal frame. The protrusion, together with the thick film screen protector gives a rough feel when swiping from the edges. In this day and age, when OEMs are offering 2.5D glass at the front, it’s a bit unrefined.

Oppo offers two color variants of the F3 – gold and rose gold. There is a chance that the phone might get more color options in the coming days, though there’s no word from the company as of now.

Sporting a 1080p 5.5-inch IPS LCD panel, we had high hopes for the F3’s screen and weren’t disappointed. It’s got a decent pixel density at 401PPI. The screen is bright and has great viewing angles sans any color shift or brightness loss.

The screen isn’t that reflective which is good but due to no oleophobic coating, it is a fingerprint and smudge magnet. Under the sun, the display fares pretty well and there’s plenty of contrast, thanks to Oppo’s software optimizations) when reading text or viewing images.

Unlike the F3 Plus, the colors aren’t very saturated and feel more realistic as well.

F3 is powered by MediaTek 6750T, an octa-core 1.5GHz processor making use of the Cortex A53 chip design. You also get 4GB RAM and 64GB of storage by default. If that’s not enough, you can expand the storage using a microSD card of up to 256GB. Unlike most phones we see these days, it comes with a dedicated microSD card slot so you can continue using two SIMs along with extra storage space.

Despite a downgraded processor, F3 displayed smooth performance. We did not notice any lags whatsoever. The 4GB of RAM really helps as far as heavy users are concerned. You can open 10 heavy apps and still get back to the oldest one and the app would still be as you left it.

The rest can be viewed in the benchmarks below. While the scores aren’t high, Color OS optimizations keep the device working like a charm.

We would like to mention, however, that the GPU is pretty weak and you shouldn’t expect graphic intensive games to work flawlessly on this device. Regular games and apps should work fin though.

Oppo’s mini flagship comes with Color OS 3.0 on top of Android Marshmallow. We would have liked Nougat out of the box but Oppo promises to update the device in the coming weeks.

Typical of what you see with Chinese phones, the UI is ultra-simplistic and does not make use of an app drawer. Standard Android users probably won’t feel at home, however, the issue can be easily resolved by installing any of the popular third-party launchers.

The rest is standard Oppo. Bright colored icons, smooth animations and transparency. You get a Security app which keeps the phone safe from Viruses and can clean up your phone from clutter and junk files. Individual file permissions are a standard Marshmallow feature, though Oppo has added support for dual apps. In simpler words, you can install two WhatsApp or Facebook apps and use separate accounts on them.

There’s an eye protection mode too. It can subtract the blue light from display so that there’s less strain on your eyes. It is also a proven fact that exposure to blue light prevents one from sleeping. So it’s a nice utility when using the phone at night.

The front facing fingerprint scanner is astoundingly fast. From placing the thumb to reaching the homescreen, it takes about 0.3 seconds. F3’s sensor is fairly accurate as it detects your fingerprints from different angles and continues to work even when the fingers are wet.

Despite coming with a single speaker, the F3 can produce decent sound. It’s not the best as far as quality is concerned, but it is pretty loud and most users won’t have any complaints.

Oppo F3 comes with a 13MP rear camera and dual 16MP and 8MP (wide angle) front cameras. After using the F3 Plus during our previous review, we hoped to see similar performance despite a lower-res rear camera sensor.

As Oppo specialises in camera technology, the phone’s Camera app comes with loads of software features which maximise its potential:

Beauty Mode is available for the front and the rear cameras. It offers options to change skin color from pink to fair and removes blemishes like pimples and any other marks on the skin.

The rear camera takes 9MP in photos wide screen mode and 13MP full-res images. The image quality is very good in daylight photography and indoors i.e. in good lighting. There’s plenty of detail, the colors are vibrant and the contrast is great. The Ultra HD mode takes it even further and the detail is multiplied several fold.

Low light imagery isn’t F3’s forte. It produces noisy images in all modes including Ultra HD, HDR, Flash and Fill Flash. The images are brighter than what we have seen in competing phones but they are still largely useless in low light.

HDR has minimal effect and you would hard-pressed to notice much difference except a slightly higher exposure setting. You’d be better off taking pictures with the Ultra HD mode or the Normal mode with HDR off (or in Auto mode).

Some Ultra HD samples are listed below:

Low Light samples are given below:

Double Exposure Mode sample can be seen below:

Panorama is also on offer for front and rear cameras.

The selfie expert is all about photos from the front cameras. The 16MP camera offers plenty of detail and the pictures come out great. There are minor issues with bright spots and the software tends to overexpose them. Considering that it is a selfie focused phone, the omission of a front LED flash is odd. Oppo does offer screen flash though.

The 8MP wide angle camera is great for group selfies. It does create a fish-eye effect due to the wide angle and a slight purplish tint. Due to the wider field of view, more people can fit in the same frame and if that’s not enough, you can always resort to Panorama selfies.

Both front cameras tend to overexpose bright spots eliminating most of the detail. We expect Oppo to resolve the issue in future software updates.

Blemish removal works automatically for the selfie cameras. However, it’s not as advanced as the Beauty mode which offers extra options. You can take selfies using your voice, palm gesture or built-in timer.

The F3 is powered by 3,200mAh battery unit. We expected adequate performance considering the screen size and the phone’s specifications. However, the battery run time was even lower than F3 Plus.

We performed the standardized battery benchmark on Oppo F3 and it lasted for 7 hours and 11 minutes. During our standard battery benchmark we run the phone through its paces in video editing, video playback, graphics rendering, web browsing and gaming.

We would like to mention here that the screen remains on the whole time that the test is running.

Under normal usage, we saw the phone get around 6 hours of screen on time with nearly two days of usage. That’s still pretty good and most regular users won’t have issues under normal usage.

Oppo focuses on camera technology and intends to compete against other OEMs by using its proprietary camera technologies. It meets the basic consumer requirements of smooth performance, good camera and decent battery life. The ‘Selfie Expert’ tag makes it unique in the market.

Priced at Rs. 34,899, it certainly isn’t the cheapest or the most powerful device in the market. But for the price, you get certain features that could be deal makers. 4GB RAM and 64GB of storage are certainly not offered in teh target market segment. There isn’t anything particularly bad about the F3, but we still would have liked the price to be slightly lower and the chipset to hold some extra oomph for the power users.

For anyone (read most users) who wants camera performance, especially a good selfie camera, this device is a perfect fit. And as far as hard-core users are concerned, they might have to look for other options.

The article has been updated to incorporate more information on camera performance.