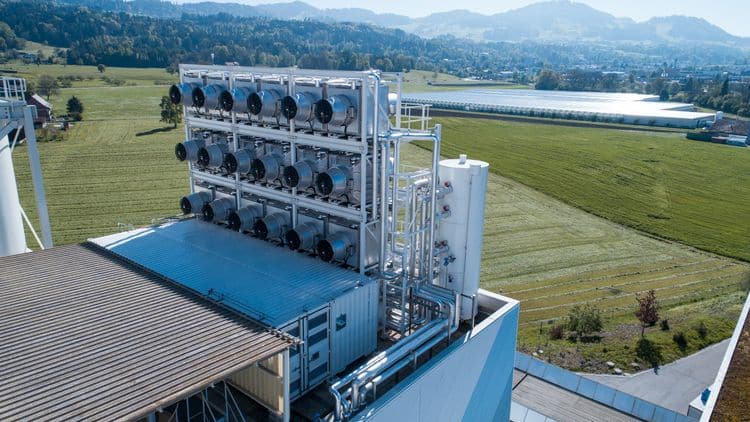 With global warming on the rise, many scientists have started to think about how to make good use of greenhouse gases, especially carbon dioxide (CO2), that is present in the air we breath. It seems that now, they might just have made a significant breakthrough in this regard.

The world’s first commercial plant, which sucks carbon dioxide from the air and can store it, is now online. The facility is based in Hinwil, Switzerland and its launch has ignited a debate about whether it is prudent or not to remove greenhouse gases from the atmosphere.

More than a decade ago, entrepreneur Richard Branson launched the Virgin Earth Challenge and offered $25 million to whoever built a viable air capture design. One company, Climeworks, was the finalist in that competition along with companies like Carbon Engineering, which is backed by Bill Gates.

It was Climeworks’ design that ended up powering the first commercial CO2 capture plant. The company claims that the facility they designed is scalable, since it is based on a modular design concept.

The company is the first to capture the gas from the air and sell it to a buyer. Its founders hope that the plant’s design and its commercial potential can boost its adoption.

The plant can remove 900 tons of CO2 from the atmosphere each year. It does this by capturing the air, passing it through its proprietary filters, which are then heated to 100 degrees Celsius to release the gas. During this moment, the CO2 gas is captured inside the plant via fans. This gas is then stored for later use.

For now, the Hinwil station is selling CO2 to a nearby greenhouse.

Cardon dioxide helps plants grow. It can potentially increase harvests by up to 20 percent. It can also be used to grow vegetables like lettuce, cucumbers and tomatoes. 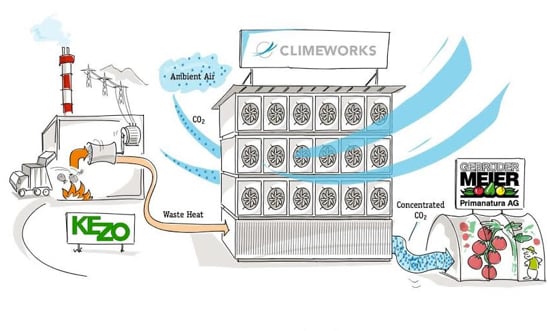 CO2 can also be sold off to soft drink companies, who can use it for their fizzy beverages. Energy companies can also make use of CO2 to produce carbon neutral hydrocarbon fuels and materials. The ability to convert CO2 to methanol fuel actually is very beneficial over fossil fuels.

While 900 tons is just a small fraction of what firms and climate activists hope to trap at large fossil fuel plants, Climeworks wants its venture to help reduce global CO2 emissions by 1 percent by 2025.

In sheer numbers, that means 10 gigatons of CO2 needs to be removed from the air. Climeworks says that 250,000 carbon capture plants need to be set up for this goal to be achieved.

“Highly scalable negative emission technologies are crucial if we are to stay below the 2-degree target [for global temperature rise] of the international community.”

Many critics say that air capture technology for fossil fuel plants needs to be perfected. By improving carbon capture at source, CO2 can be prevented from entering the atmosphere in the first place.

MIT’s senior research engineer Howard Herzog calls carbon plants a “sideshow”. He estimates that the cost can be as much as $1,000 per ton of CO2 – about ten times the cost of carbon removal at fossil fuel plants. He did not name Climeworks, however.

Climeworks hasn’t released any cost summaries yet. However, the company has stated that it was being financed by Swiss Federal Office of Energy and European Union.

It is said that such plants cost about 3-5 million Euros to set up but also that the price is expected to go down with time.