The descent of the Pakistan Stock Exchange continued on Tuesday with the benchmark KSE 100-index shedding 1,600 points. The political uncertainty prevailing in the country with regards to the work of the Panama case Joint Investigation Team (JIT) probing the Sharif family’s assets has had a negative impact on the stock market.

Good times continued to roll for the PSX well into 2017. On May 25, the benchmark KSE-100 index hit an intra-day all-time high at 53,124 points But since then the market has lost almost more than 8000 points.

The market has gone down a cumulative 15% in the past month. Earlier on June 12, the market dipped 1,800 points as news hit of the prime minister’s summoning by the JIT.  Whereas panic was seen among the local investors today after the losses they had seen last week. Their main priority was profit taking today. It seems to be there are very few buyers in the mutual funds as said by the market experts. Local funds have turned sellers now as well. 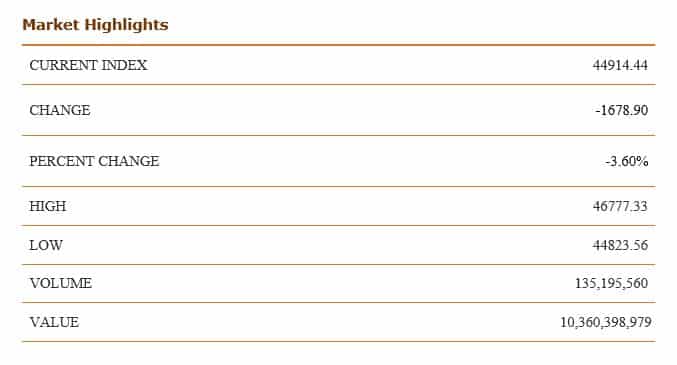 Shares of 391 companies were traded. At the end of the day, 32 Stocks closed higher, 340 declined while 19 remained unchanged.