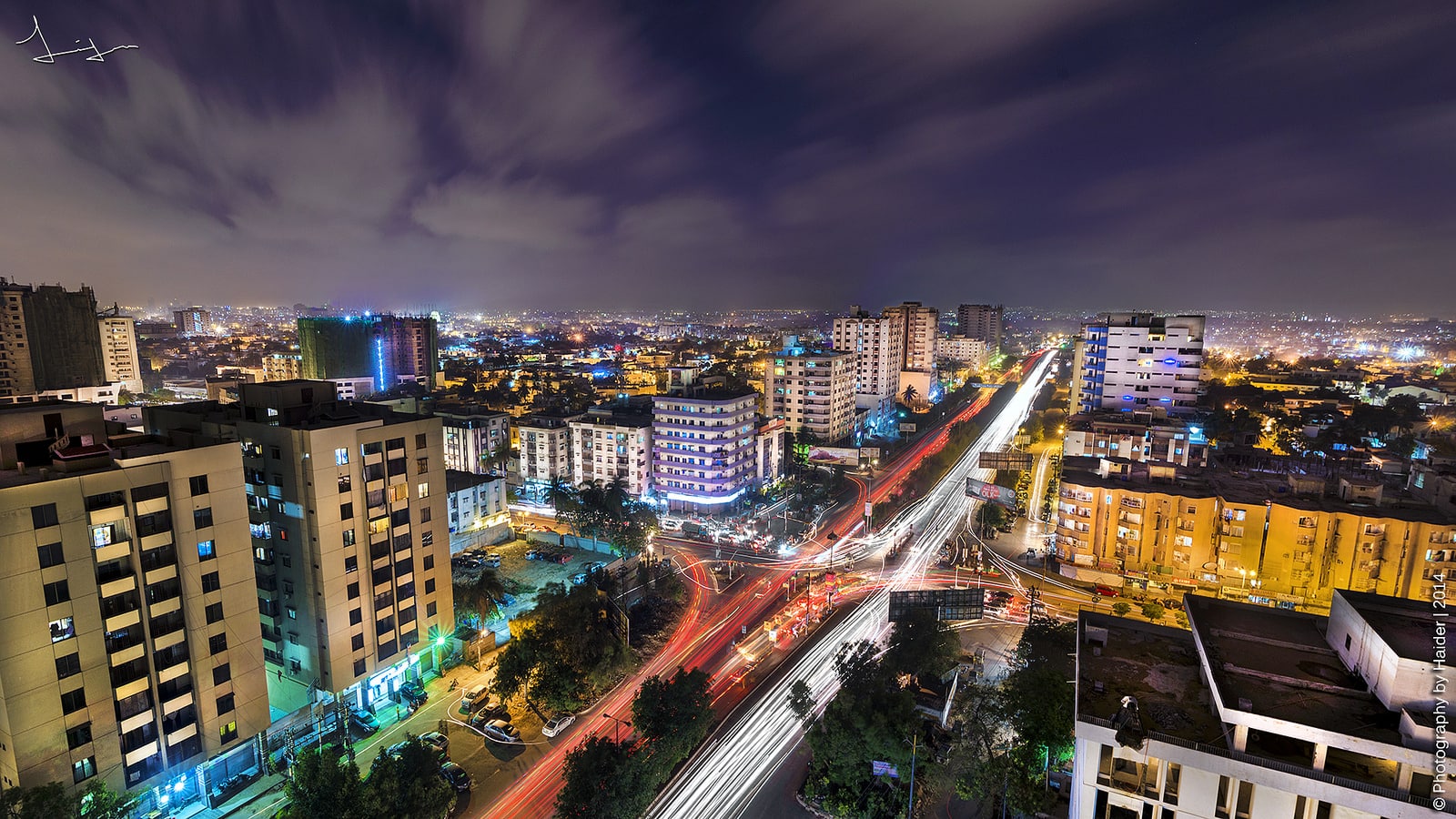 Around this time in August last year, Mohsin would have arrived in Karachi with five hundred rupees in his pocket, no place to stay and barely any savings.

He’d then couch surf between a few friends’ living rooms.

A mere three months later he would rank among the Top 5 Sellers of Daraz’s annual juggernaut Black Friday Sale.

In the intervening months he would create a life for himself where his earnings would amount to Rs. 2.5 million.

It’s a classic empty-to-bulging-pockets 180º revolution: protagonist comes to big city from small town carrying his dreams, aspirations and scars with him.

And yet it would be remiss of us to paint Mohsin’s ascent up Daraz’s ranks of prized e-commerce vendors as an overnight success story.

For Mohsin’s story started quite some time ago, right in the heart of Sindh, some 140 miles from Karachi. This isn’t overnight stuff – this is an adventure.

Son of the soil: Sanghar

Mohsin is from the agrarian, predominantly rural district of Sanghar in Interior Sindh. He’s the eldest of 5 siblings. His father is a laborer who used to repair sewing machines and run an electronics shop – one of only three shops in his town that sold appliances. 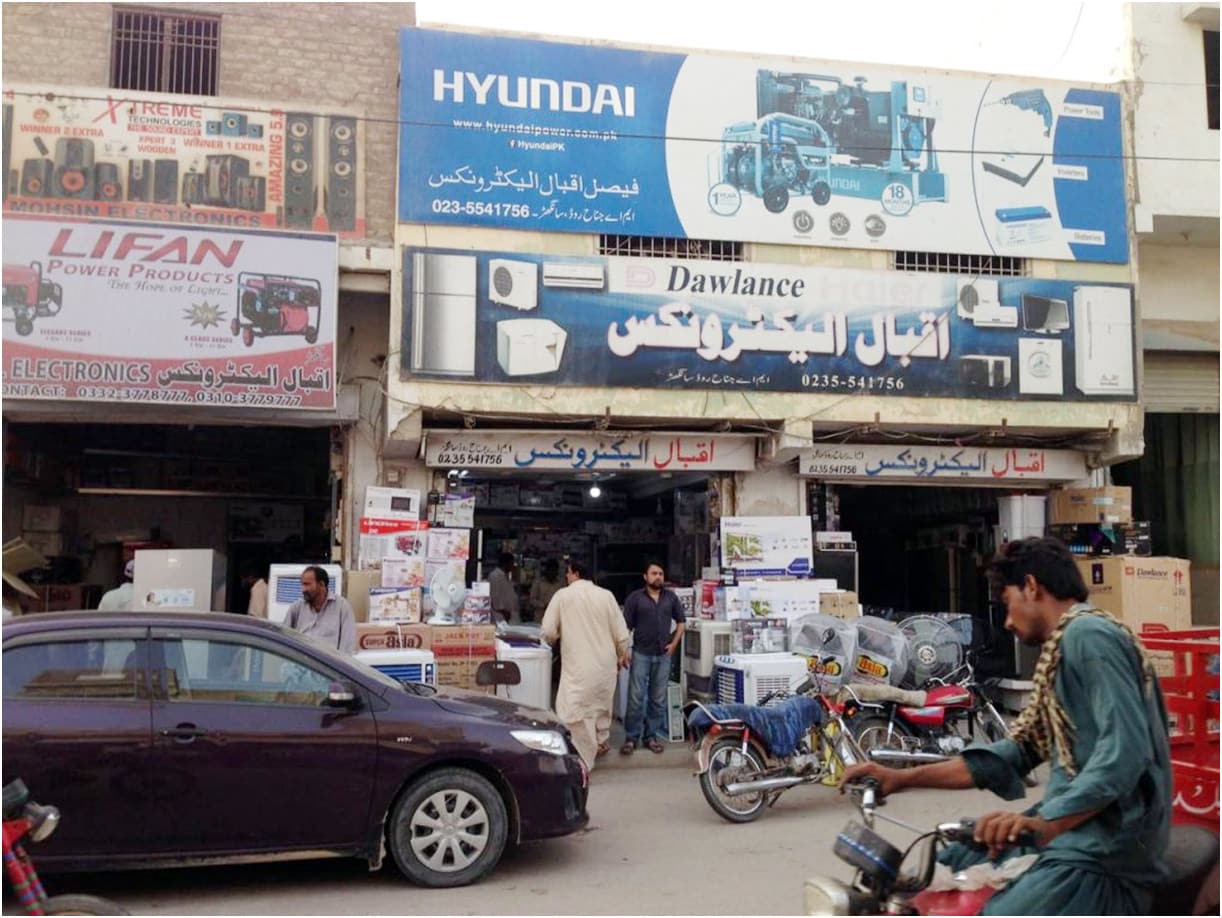 Mohsin had been accompanying his father on various business related trips since the fifth grade, around the same time he started lending a hand in shop upkeep.

These excursions saw him travel the length and breadth of his native Sindh, and also venture farther afield to source and procure product.

‘For me, it was more of an excuse to travel and experience new people and places.

I had this deep-seated curiosity about the world. Travelling also taught me about networking.

I got to know the ins and outs of the business. I got exposure. Not the level of exposure I get here, as a new migrant to Karachi, and as a seller on Daraz – but still.

It was preparing me for the life I’m leading now.’

no playgrounds, no hospitals, no recreation.

It was quite an underdeveloped area despite having high yields of wheat, rice, cotton and sugarcane and even excelling in oil production.

Educationally, the district does not fare much better, with an overall literacy rate of 54%.

Coming from an under-served district the likes of Sanghar did achieve one thing though: it made Mohsin highly self-sufficient.

He tells us with a hint of well earned pride:

I’ve been living a life of utmost self-reliance since the past 10 years. I may not have been thriving in this period, but I was surviving.

Then came the flood: A family & a business swept up in debt.

After completing his Intermediate studies from Forman Christian College, Mohsin set off for Karachi University in 2010 to pursue a degree in Business Administration. He’s the first in his family to pursue a degree.

Midway during his second year at Karachi University in 2011, a historically devastating flood hit Sindh.

The floods of 2011-2012 disrupted not only his college but also the lives of millions across the province, his beleaguered family included. In total, more than 300,000 houses were damaged, and nearing 1 million acres of area was inundated in all talukas of the district. 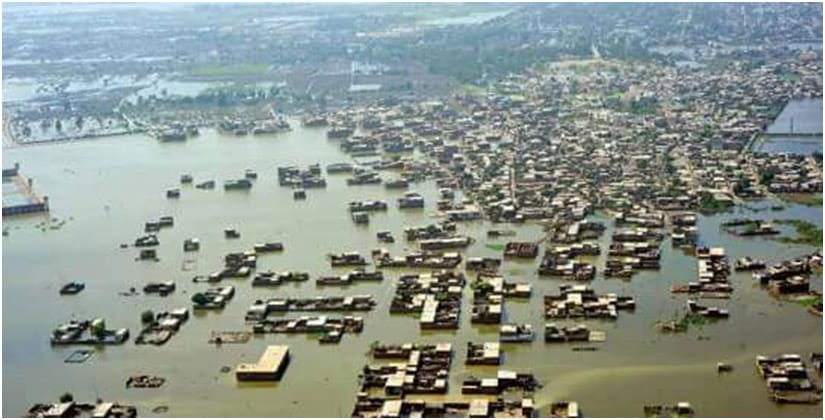 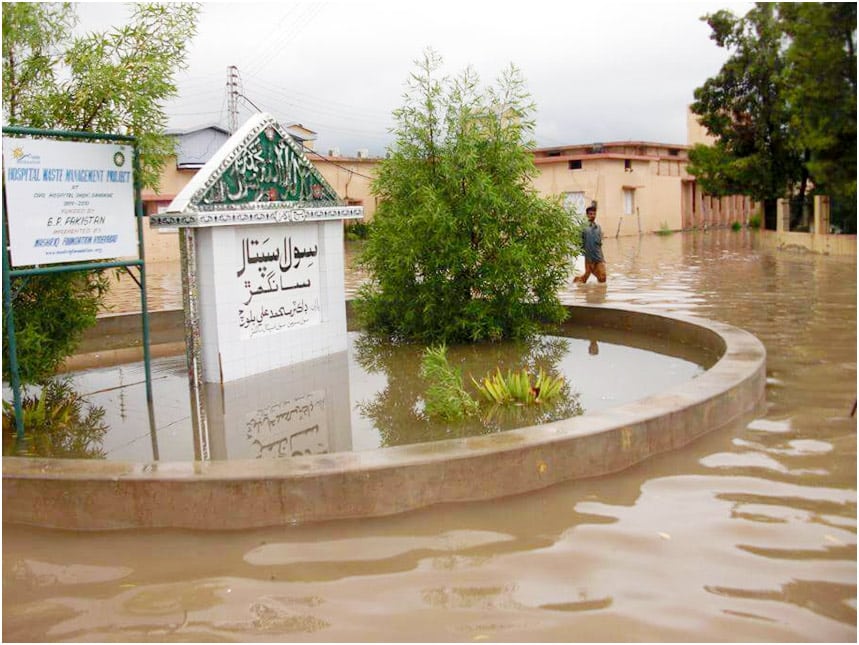 The commodity market faced a severe blow owing to the destruction of roads, transport and market infrastructure.

Transporters, wholesalers and retailers alike were hit hard. Mohsin returned home to steer his father’s shop to some semblance of stability in the wake of this disastrous flood.

His family had incurred severe losses and the multi million rupee bank loan his father had taken now hung over the family like a sword of Damocles.

As if this weren’t enough, several villages in Sanghar were also declared drought-hit areas in 2013 and 2014. Business hadn’t been the same since.

Mohsin slogged at the shop the next two years working to recompense for the heavy losses brought about as a result of the flooding.

August 2016. ‘Eid ka Dosra din tha.’ Desperate for a way out, and finding himself increasingly disillusioned by a lack of opportunity, Mohsin packed his bags on the second day of Eid. He had to get out. He had to be on his way.

After all, it was his mother who said ‘Yahaan tumhara kuch naheen hain. Tum yahaan naheen chal suktain. Nikal jao.  (There’s nothing for you here. You’re meant to go elsewhere.) Go elsewhere.

During the time Mohsin was rooming with friends, he joined a firm outsourcing customer service for Ebay and Amazon.

Suffocating as it was, this short lived Rs.16,000 a month gig helped make ends meet. Mohsin found being answerable to a boss whose competency he doubted frustrating. It was Moshin who had the ideas! This guy just had commands.

‘I’m not against doing a job. But it just wasn’t for me.

Taking orders from a guy who didn’t have a clue. I needed more breathing room.

I had been keeping up to date with developments in the world of commerce and had made up my mind that e-commerce had mine, and Pakistan’s name on it.’

Independent-minded that he is, Mohsin managed to scrape enough savings into renting out a store at Kohinoor Electronics Market in Saddar.

His friend, Fahad Bhai, introduced him to various dealers in the market and got the ball rolling. 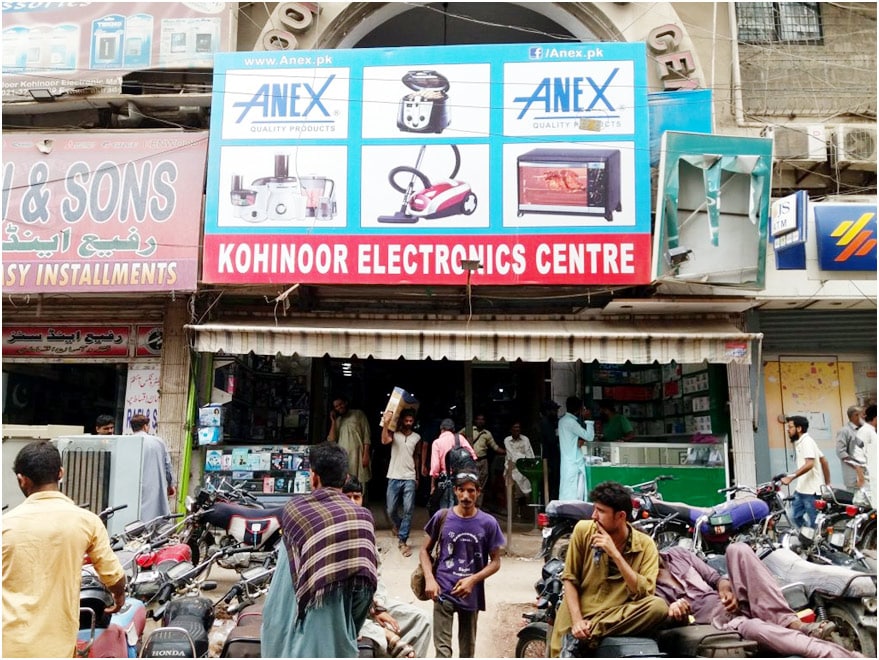 This is where Daraz Vendor Manager Abdul Rahman comes in.

Upon a few meetings, Rahman was able to intuit Mohsin’s innate of raw business acumen and on-boarded him in November 2016 –  just three weeks shy of Black Friday: the year’s biggest sale.

Mohsin Traders now had a home on Daraz.pk, going into business in the Large Appliances category with 30 SKUs.

Rahman, encouraging of Mohsin from the start,  says:

‘It was a risk going in, because the kid didn’t have prior experience with e-commerce vending.

What he did have, however, was first-hand localized knowledge about dealers in his category.

He knew what appliances Daraz had and did not have and knew how to stop-gap.

He knew how to market himself and had excellent PR skills. Mohsin acquired his skills at the grass-roots, from the ground up.

His experience at his father’s store in Sanghar meant he had operational know-how. He was adamant that his shop be registered online as soon as possible.

Thinking he could gain a lot from joining a professional platform like Daraz, we agreed.

While certainly rare for us to on-board a new seller just before a Tier 1 event, we took our chances and couldn’t be happier with the outcome.

The pay off was swift. Even doubters, like Mohsin’s father, who wasn’t encouraging of his foray into e-commerce now appreciated what the e-commerce fuss was all about.

The novice new-guy-on-the-digital-block secured 700 orders during Black Friday and fulfilled all of them.

Modest but self-assured, he excitedly recalls:

I was up till 5 AM that night looking after every aspect of order fulfillment. QC-ing all the products, packing, wrapping.

Taking the cue from the meteoric success of his Black Friday numbers, Mohsin decided to dedicate his physical store fully to his Daraz business.

It effectively took on the role of ad hoc warehouse and now almost exclusively sees to his Daraz concerns. Stories of his success have reached Sanghar, as has the rather catchy moniker ‘online bhai.’

Sure it would be great if they buy from my online shop. But even if they take their custom to another Daraz vendor, it’s all the same to me. If it’s good for e-commerce, it’s good for me.

The benefits circle around. Everyone wins.

At only 25 years, the boyishly young vendor has been winning ever since. Daraz Seller Education has helped him modernize his approach to commerce and has secured his trust in a company he is certain isn’t going anywhere anytime soon.

‘There were some dealers who refused to sell products to me in the market because they were suspicious of e-commerce.

I decided to source the products directly instead. Their fears had to do with the fact that Daraz doesn’t really own many fixed assets.

They felt the company could pack up its bags any minute and walk out.

Of course, they were ignorant of Daraz’s milestones and were running on rumours.

Why leave when Daraz has every reason, every indicator, to stay? Daraz is 100% committed to sustaining e-commerce in Pakistan long-term.’

When it comes to milestones, Mohsin isn’t doing so bad himself. His sales during the HBL ShopFest in May 2017 exceeded 74 lakhs, even surpassing his Black Friday benchmark.

His inventory has expanded from 30 to 110 SKUs, catering to customers from metropolises to lesser known villages and hamlets like Timergara (Khyber Pakhtunkhwa), Dipalpur Baseerpur (Okara), Keil (Kashmir) and Panjgur (Balochistan).

What the flood left in its wake; a resilient son of many soils:

‘You’re a fish of the big sea. What are you doing here?’ Hassan Bilal Ansari, Mohsin’s mentor-figure and role model, told him once in protest.

There is much in Mohsin’s struggle that leaves an impression. But above all, his capacity to learn from all those around him, be it his mother or teachers or even Daraz itself, is  remarkable.

He is open to healthy influences, wherever they might come from.  Here’s a young man who is open to life’s tapestry of experience – experiences both good and bad.

He has battled both disaster and mental anguish to arrive at the place he is at now.

Contemplating the past 10-12 years of his life and taking stock of the sum of experiences that have come to mold this son of many soils, Mohsin says: 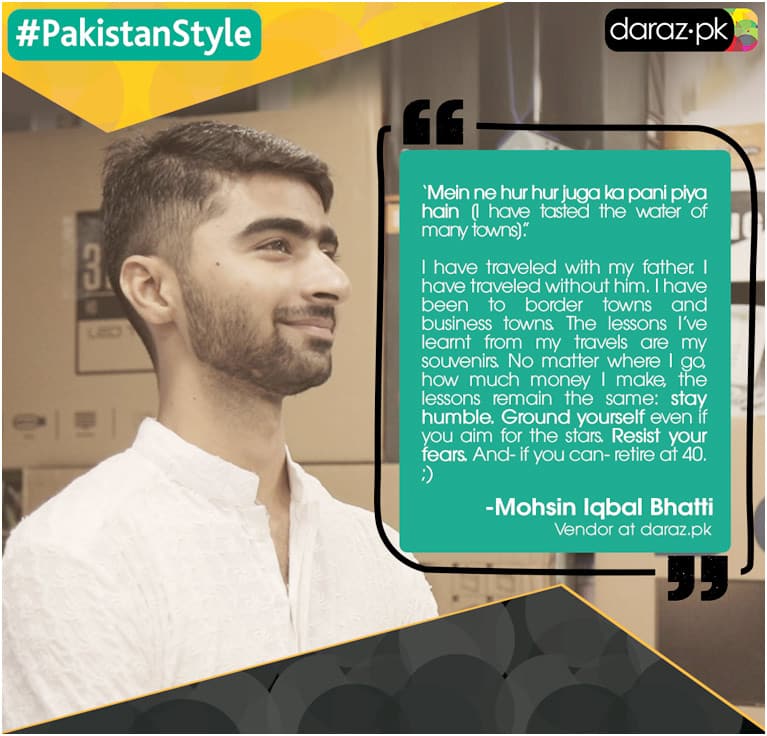 When he was still in school, Mohsin was made two film recommendations by his esteemed role model Hassan: iconic titles like The Shawshank Redemption and Fight Club. It only feels appropriate, then, to end his story with the words of one Tyler Durden:

I say never be complete. I say stop being perfect. I say… let’s evolve. Let the chips fall where they may.

Daraz could not be prouder that the chips fell this particular way. As life’s turbulent waters receded back, the fish – has finally found its sea.