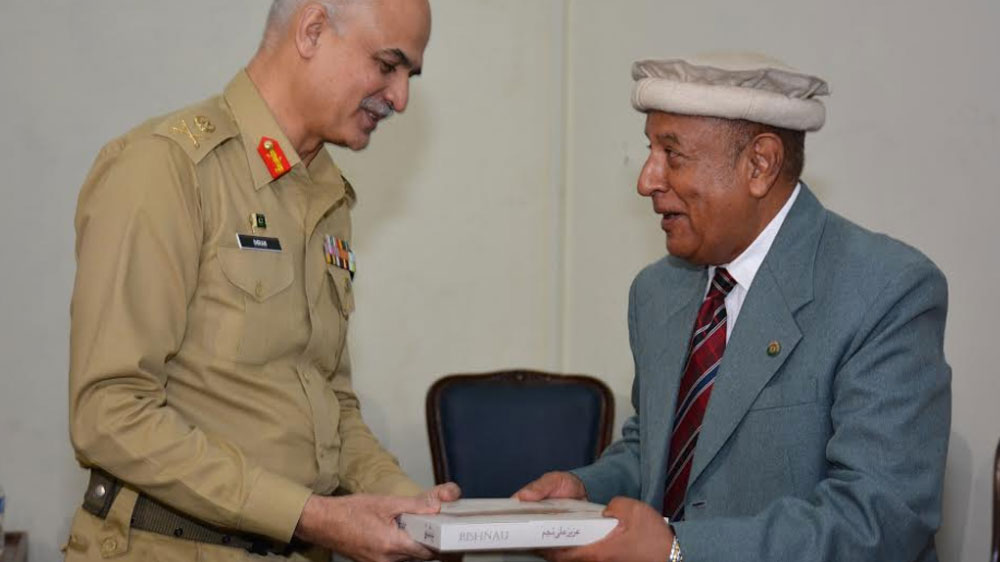 Dr. Mukhtar Ahmed, Chairman HEC was the chief guest on the occasion while Lt. Gen. Syed Muhammad Imran Majeed, Vice Chancellor NUMS was the guest of honour. Both the dignitaries formally launched the book.

“I am glad HEC is hosting the launch of first publication from NUMS. The evening with Rumi is an illuminating and enriching experience taking us back into Rumi’s world”.

He informed the audience that HEC has included a project on Sufism in its Public Sector Development Programme and it plans to set up a Centre of Excellence on Sufism. He regretted that a major reason for increased terrorism is our distance from the real basis of Islam. He also announced to hold a conference on Persian at the Commission Secretariat soon.

The Chairman said that Maulana Rumi’s contribution is truly a golden chapter of the illustrious Muslim heritage. “Rumi’s mystic poetry has no match in the world history. His thoughts unfold the mysteries of spiritual world and divine love. Rumi’s call that the divine love must manifest itself in the love for humanity without discrimination in any form is a beacon of light in the evil darkness of hatred.”

Dr. Mukhtar Ahmed said, “We are proud of Dr. Najam’s work, as it is the real impact that HEC always talks about.” He announced to send copies of the book to all the 188 public and private sector universities of Pakistan. He said HEC is committed to upbringing of universities with appropriate support and facilitation, adding that the Commission continuously strives to find new and emerging avenues to help universities promote their activities in all possible means within its purview.

Briefing audience on the book, Dr. Najam said Bishnau is an introduction to Maulana Rumi’s extraordinary life and his profound work in the form of Masnavi. “The colorful illustrations remind us of Rumi’s times and also help us interpreting his thoughts,” he said adding that Rumi was the best-selling poet in 1990s in the United States.

Shedding light on the Rumi’s everlasting Masnavi, he quoted Mr. Coleman Barks, a popular interpreter of Rumi, “The Masnavi is a sacred text that invites one to drown in it.” He maintained that UNESCO, in acknowledgement of Rumi’s legacy, declared 2007 as the Year of Rumi. He said the commentary made in the book, both in English and Urdu, with original Persian text makes Rumi more accessible to many, particularly youth.

Lt. Gen. Imran Majeed expressed pleasure on the launch of first publication of NUMS. Terming the universities a platform for questioning, reasoning and debate, he said reasoning through logic is an imperative practice that needs to be promoted in academic circles in order to develop understanding of issues. “We complain about justice and fair play, since both of them are not possible to exist without understanding.” He stressed the significance of reviving the Muslims historic heritage.

Appreciating the content of Dr. Najam’s book, Mr. Iftikhar Arif said Dr. Najam has brought to the fore a faithful translation of Rumi’s poetic verses. He regretted the lack of understanding of Persian and urged academia to promote languages which have roots in the Islamic history.

Earlier in his opening remarks, Dr. Arshad Ali said that teachings of Maulana Rumi are relevant for all times, as they preach humanism, love and tolerance. He stressed the need for spreading Rumi’s message all over the world for the well-being of mankind.