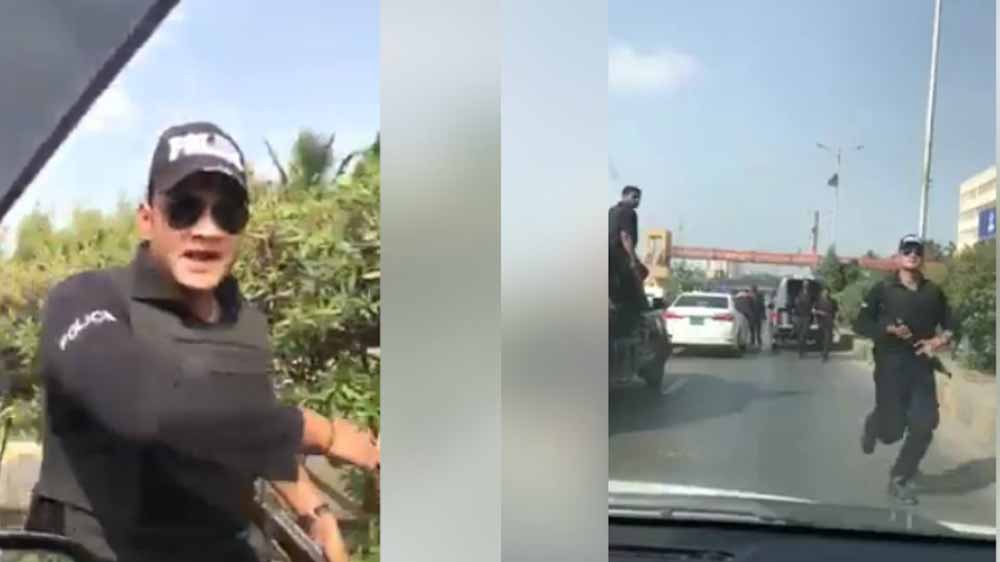 Pakistanis rarely agree on one thing but when it comes to the VIP culture, there’s no doubt where they stand on this issue.

Be it long traffic jams due to the never-ending official protocol accompanying higher-ups, queues being broken by ‘influential people’ at governmental offices, every Pakistani has more or less suffered from the VIP culture.

A demonstration of this ugly VIP culture occurred in Karachi yesterday and you’d think that people wouldn’t be shocked anymore.

But this time, grisly footage of how police from a security convoy, that was reportedly escorting a VIP in Karachi made the rounds over social media. A resounding condemnation followed with citizens on social media united in their view regarding the assault on a fellow citizen by law enforcement authorities.

The incident occurred yesterday at Shara-e-Faisal, one of the main arteries of Karachi.

A security guard (who was later confirmed as a policeman) beat up a person whose car got in the middle of the convoy.

The footage was captured by the victim himself, and needless to say, the highhandedness of the security personnel speaks volumes about the entitled behavior of our elites.

The anger and frustration of common citizens was palpable and thanks to the outcry it generated over social media, the police authorities were forced to take action over this incident that reflected poorly on them.

Inspector General Sindh, AD Khwaja took action against the officer who was captured on video. He also ordered a full inquiry over this case and appointed SP Security Malik Ahsan to get to the bottom of this matter.

The media has reported that since then, the police officer and the squad commander in charge of the security convoy have been suspended for abusive behavior and assault. It is good to see that some semblance of accountability has taken place after all, though its anyone’s guess if this is the last incident of its kind for the foreseeable future.

In one of the rare cases where the abuse of VIP culture has resulted in the punishment of the culprit(s), many citizens need to ask the next question – when will VIPs start to act like normal human beings?

That question alas, everybody knows the answer to.