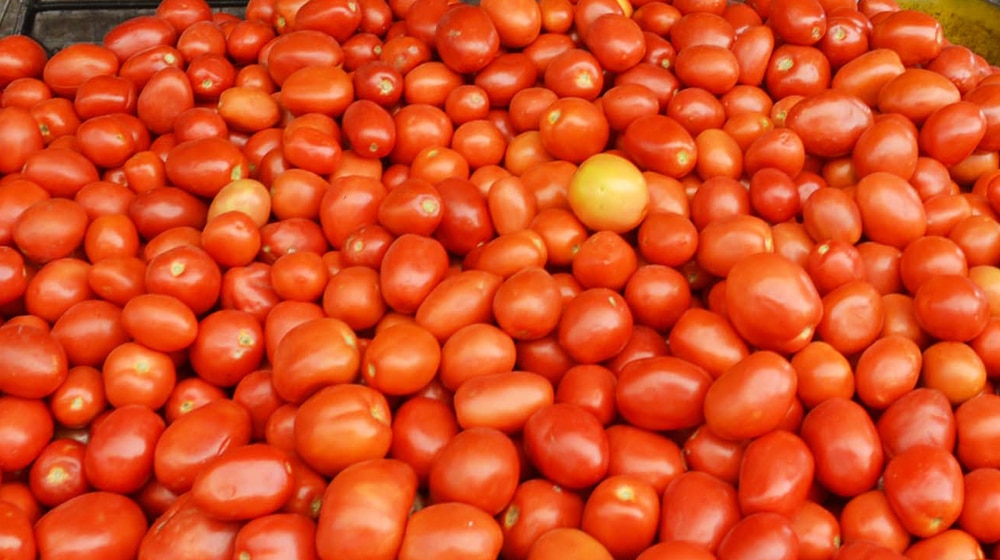 According to the latest update, the prices of tomatoes has surged even higher. The reports suggest that 1kg of tomatoes are now being sold between Rs. 200 to Rs. 300, with 5kg being sold for a flat rate of Rs. 1,000.

Price control committee has been silent on the matter and the public is seeking answers against this injustice. Administration is being constantly put under pressure and it is time they take a decision to resolve the matter at hand.

The prices of tomatoes has been on the rise since the last month across the whole country. With a price between Rs. 160-200 per kg or even Rs. 250 per kg at some places, the vegetable (technically fruit) is beyond the common man’s reach.

To cater the demand and supply issues, government decided to import tomatoes from Iran, however, it didn’t help much and the retailers continue to sell them at high prices.

There has been a sharp drop in the wholesale price of tomatoes after the supply from Iran. During the last few days, it dropped to Rs. 70-75 per kg.

Muhammad Asif, committee vice chairman of Karachi’s ‘Sabzi Mandi’, told a media outlet that the monsoon downpour in recent months severely harmed tomato crop across the country. Almost 50 percent of the production was missed, resulting in a gap between supply and demand countrywide.

Prices Raised Again Because Of Holidays

However, due to the Ashura holidays, the supplies were reduced and the wholesale price got up to 160-170 per kg once again. Seeing this, the retailers increased the price from 140 to as high as 200 per kg.

Benefiting from the fact, that tomatoes are consumed in large quantities no matter what the price, the retailers kept the prices high even when they received them at a very low wholesale rate.

Haji Shahjehan, the president of the Falahi Anjuman Wholesale Vegetable Market Superhighway, Karachi, said that due to improved supplies from Iran and Balochistan, the wholesale prices dropped sharply.

He added that due to scant supplies during the Ashura holidays, the prices rose again. Shahjahan stressed that in order to stop the prices of tomatoes from increasing further, import was necessary.

It has also come into notice that most consumers like the tomatoes from Baluchistan as compared to Iran’s tomatoes due to the better quality and taste. Same was the case with Iranian onions, which were disliked because of high water content.

The Sindh Abadgar Board has assured that by October 20, tomato crops from Sindh will reach the market which should help reduce the prices. This year, the board said, tomato crops have been cultivated on a bigger scale which would help bring down prices to Rs. 30-40 per kg.