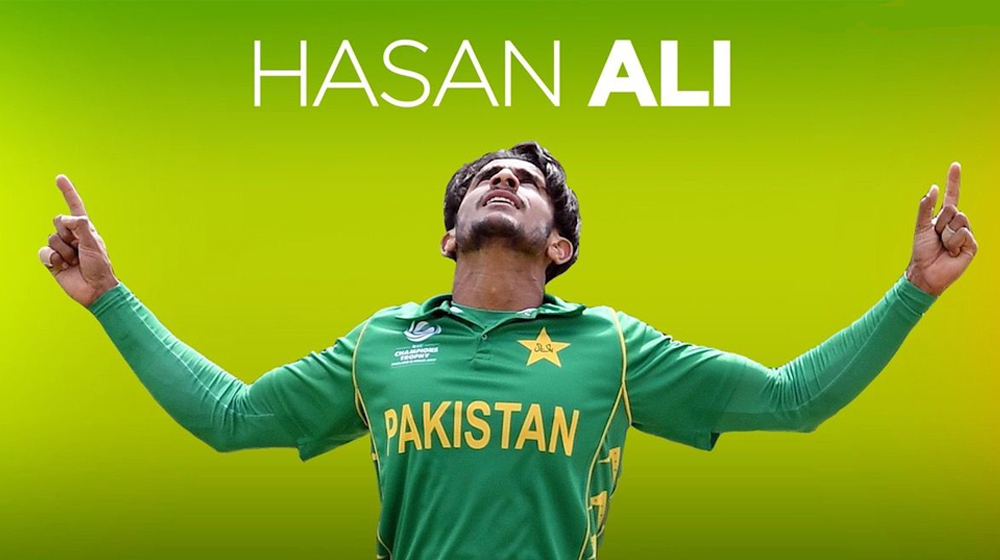 Just when you think Pakistan isn’t producing quality fast bowlers, a gem comes out of nowhere, representing Pakistan and registering his name in the record books to be remembered forever.

The land of great fast bowlers, Pakistan never fails to disappoint when it comes to producing world-class bowlers. From Fazal Mehmood to Sarfaraz Nawaz, Imran Khan to the 2 Ws (Wasim and Waqar), Shoaib Akhtar to Mohammad Asif (you may disagree, but he was a pure genius), and now Muhammad Amir to Hasan Ali, Pakistan cricket is full of names who have astonished the world with their magical bowling.

The list is long, but let’s focus on the most recent fast bowling sensation from Pakistan: Hasan Ali; the man behind exuberant celebrations. 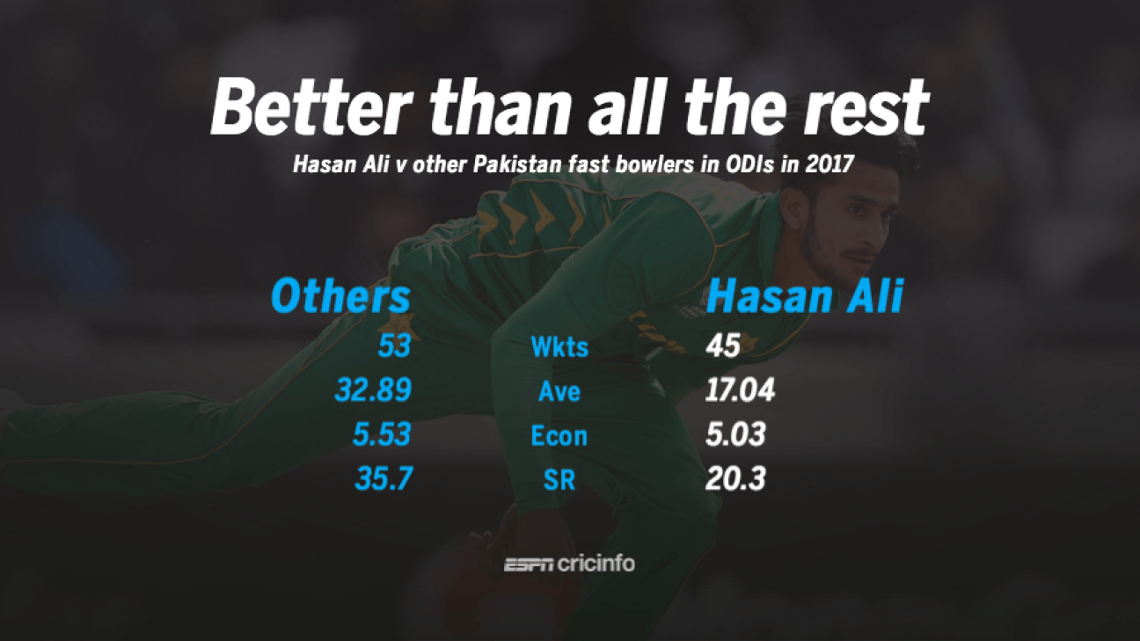 Coming into the limelight from Pakistan Super League, Hasan Ali has never looked back since his induction in the national team. He has become the go-to man for the captain whenever he needs wickets to dismantle the oppositions’ batting line-ups.

Having played just 26 One Day Internationals, the right-arm pacer has already befuddled some of the best batting line-ups in the world: South Africa, India, England, you name it, he has troubled them all. You do remember the Champions Trophy, don’t you?

Let’s talk about records, shall we? 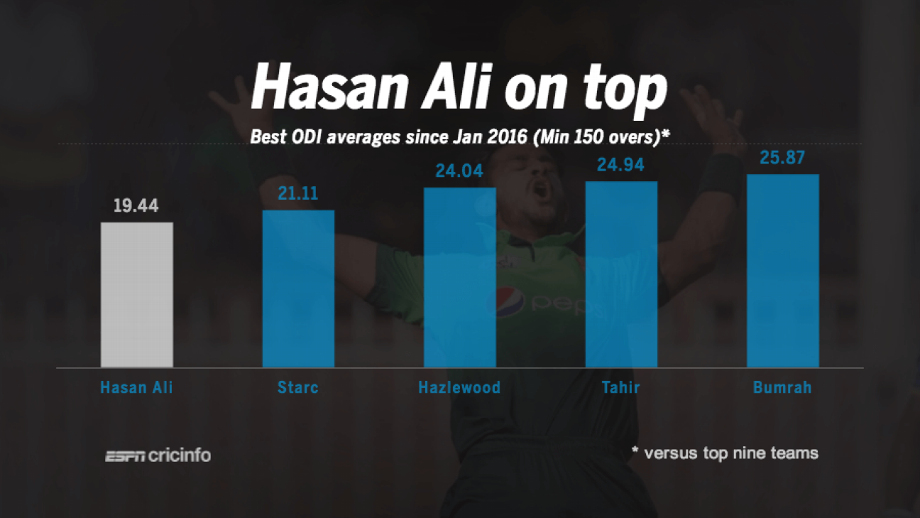 Hasan Ali has surpassed the great Waqar Younis as the quickest Pakistani bowler to 50 ODI wickets, reaching the milestone in just 24 games. The only bowlers who’ve achieved the feat quicker than Hasan are Ajantha Mendis, Ajit Agarkar and Mitchell McClenaghan.

Thanks to his roaring start to the ODI career, Hasan has already claimed the top spot in bowlers rankings. He is also the leading wicket-taker in 2017 with 45 wickets.

2017 has been a phenomenal year for Pakistan’s new bowling recruit courtesy his average of 19.44 in ODIs this year, the best among all bowlers. Before Hasan Ali, Pakistan’s bowling was in tatters, Amir wasn’t picking enough wickets, Wahab was too expensive and the spinners lacked the X-factor ever since Saeed Ajmal was ignored by the PCB. 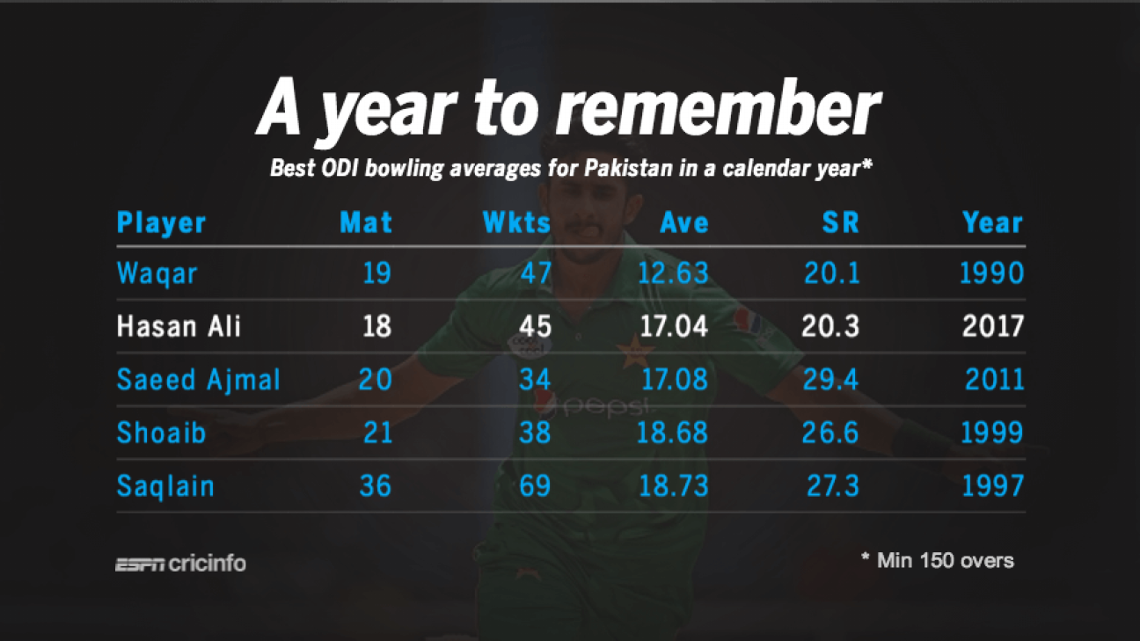 Hasan and some other young faces in the bowling attack, including Rumman Raees and Shadab Khan have beefed up the Pakistan’s bowling prowess, helping Pakistan bundle out the oppositions for below-par totals.

It is because of Hasan’s brilliant year with the ball that Pakistan’s pace attack has enjoyed an average of 25.61 and a strike rate of 28.6 in ODIs, which is easily the best among all the pace attacks.

In 18 matches this year, Pakistan’s fast bowlers have taken 98 wickets, out of which 46% have belonged to Hasan Ali. While other fast bowlers have struck every 35.7 balls, Hasan has got a wicket after every 20.3 balls. He has easily been better than all the rest combined.

Hasan’s Waqar-esque year has seen him win matches rather trophies for Pakistan. He has been the leading wicket-taker for Pakistan in all the series except two, since his debut.

What Makes Him Special?

Words do no justice to Hasan’s abilities with the ball. But, what’s so special about him that’s kept everyone talking?

He is a wicket taker, no doubt, and he takes wickets at will; whenever he comes on to bowl, he makes life tough for batsmen, no matter the stature of the batsmen he bowls to. Even if he doesn’t pick wickets, which is highly unlikely from what we’ve seen so far, he helps other bowlers bowl out the batsmen.

Lets talk about the middle overs, where the matches are shaped and won.

What does Hasan offer in the middle overs?

Well, Hasan has an uncanny habit of taking wickets in the middle phase of the innings when it is the most difficult to pressurize the batsmen and send them to the pavilion. His average of 19.33 and strike rate of 25.73 is by far the best among all the bowlers; so much so that his average is 34% better than Imran Tahir who is second on the list. 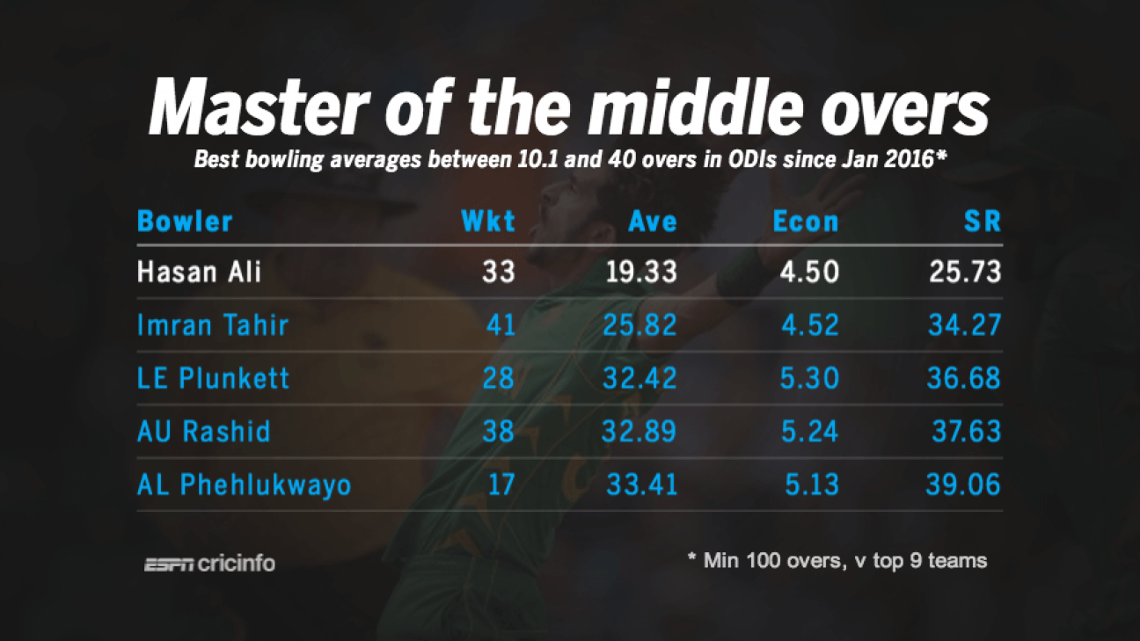 In-swing, out-swing, pacy yorkers, slower bouncers and very consistent good length bowling; Hasan Ali has everything up his sleeve and he was at his prime in the Champions Trophy 2017.

His trophy-winning tally of 13 wickets is a once in a lifetime feat and we absolutely love him for that.

The Hasan Ali factor has definitely juiced up the Pakistan’s bowling prowess.