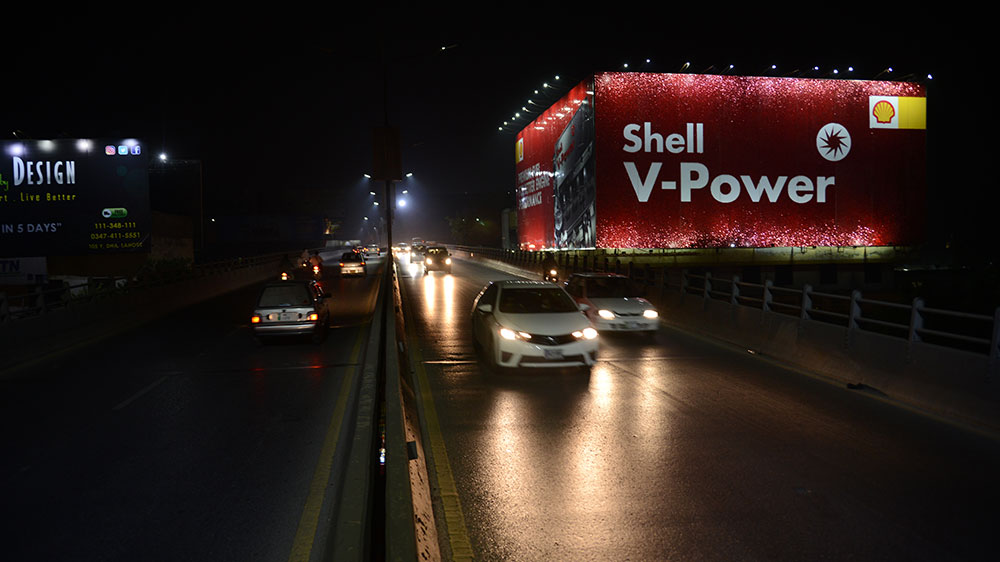 Shell Pakistan is surely on a roll these days. Its out-of-home (OOH) marketing campaign continues to put it on the radar all over the country.

Shell’s V-Power brand has become the talk of the town, what with the mighty rollout of the oil company’s giant posters at Centaurus Mall.

Their next project needed to be bigger, better and more visually arresting than everything that came before. Kinetic Pakistan, the agency in charge of V-Power’s brand visibility through out-of-home media, has come up with the next big thing.

For its next OOH marketing initiative, the oil company decided to go with a shimmering billboard.

Simple, striking yet designed to capture the attention of every motorist that passes through Jinnah Flyover, Islamabad, the shimmering billboard has already carved a name for itself due to its effective use of visuals.

This breathtaking billboard is a piece of art and can be seen from a distance as it shines during day and night. The billboard is so eye catching that it’s hard to miss.

Shell’s V-Power Campaign Continues to Be a Highlight

Apart from the Shimmering billboard at Jinnah Flyover and the three giant posters at Centaurus Mall, Shell has also featured its premier brand at other key locations all across the country.

The campaign has rolled out building wraps in Karachi in two key locations – at Ocean Mall and A–One building at National Stadium.

This campaign rolled out with the conventional plan as well across Karachi, Lahore, Islamabad and Rawalpindi to create awareness.

For the aforementioned executions, Kinetic Pakistan teamed up with Momentum Media, taking advantage of its expertise. The campaign also deployed some more OOH assets like digital streamers at MM Alam Road, Lahore.