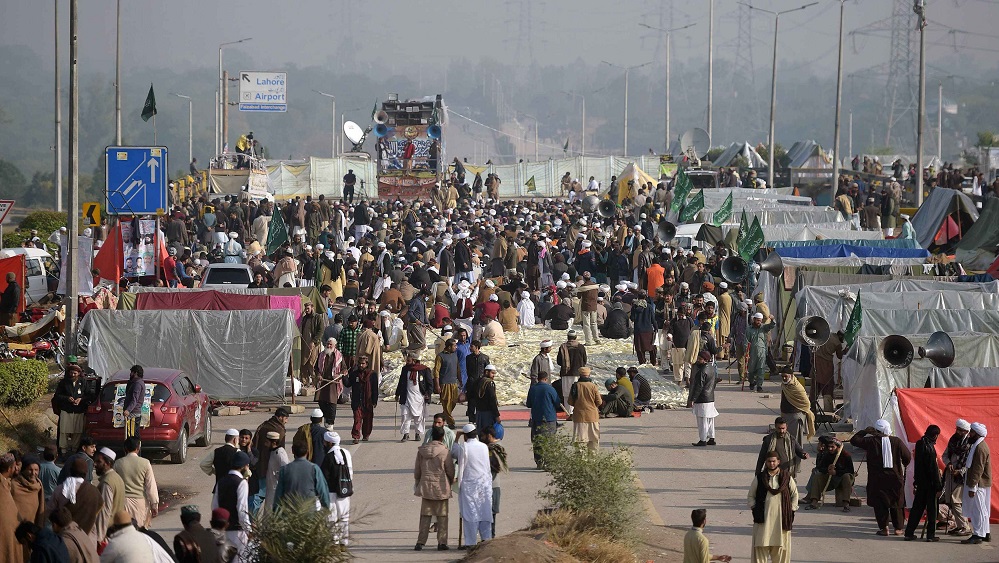 These past few weeks of the protest brought about massive chaos all over the country. The operation against the protesters at Faizabad resulted in an output, completely opposite to what the government had planned. The situation grew so bad that the police and army had to be summoned. The house of two federal ministers was attacked as well.

At first, while following the directions of the COAS, the sit-in was handled peacefully by the government, but then the situation worsened. The crackdown wasn’t well received by the religious party protesting in Islamabad. Soon after, many new protesters were seen in the federal capital and other major cities. The entire country was literally shut down for several hours.

Here is how the international media portrayed the protest in Pakistan: 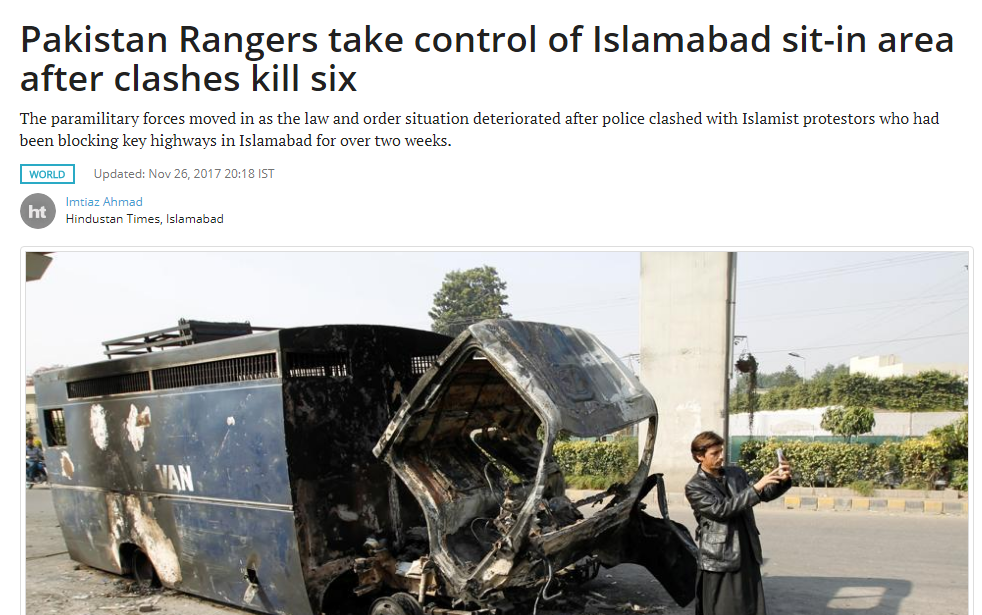 “The Pakistan Rangers took control of the area occupied by anti-blasphemy protesters in Islamabad on Sunday while police and the Frontier Corps personnel were deployed in other parts of the city, Radio Pakistan reported, as peace gradually returned to the capital and other cities after a day of violent clashes left at least six people dead.

The paramilitary forces moved in as the law and order situation deteriorated when police clashed with the radical Islamist protesters who had been blocking key highways in Islamabad for over two weeks, demanding the resignation of the law minister.” 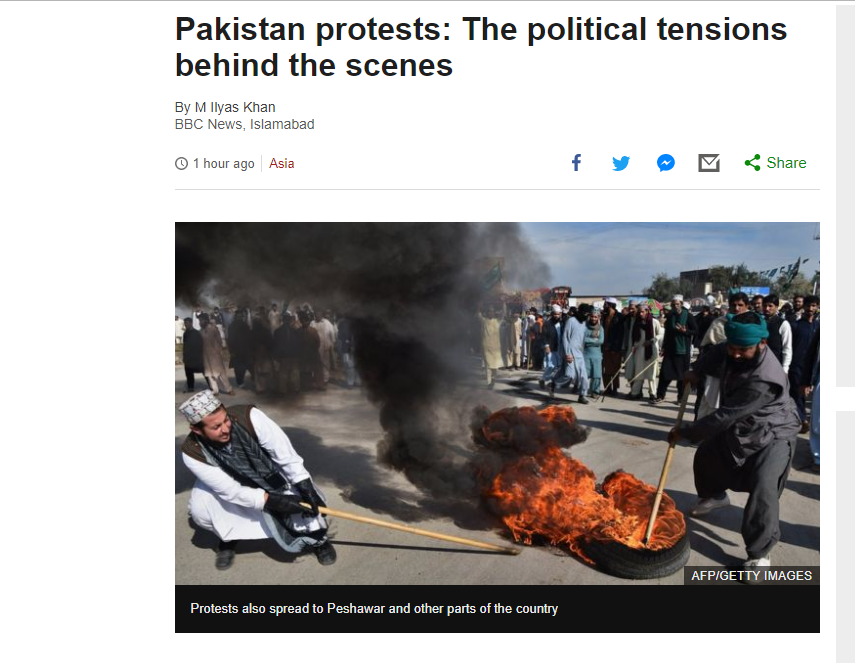 BBC, in a story “Pakistan protests: The political tensions behind the scenes,” wrote:

“The situation in Islamabad had been simmering for three weeks before it erupted into violence on Saturday.

“Many blame the government for allowing the protesters to grow in number and build a countrywide momentum for their movement.

“When the authorities moved, they did not appear to have a good plan. The police failed to arrest leaders of the protest, and when the trouble started to spill into other cities, they resorted to a controversial policy of blocking all live news channels and social media websites. 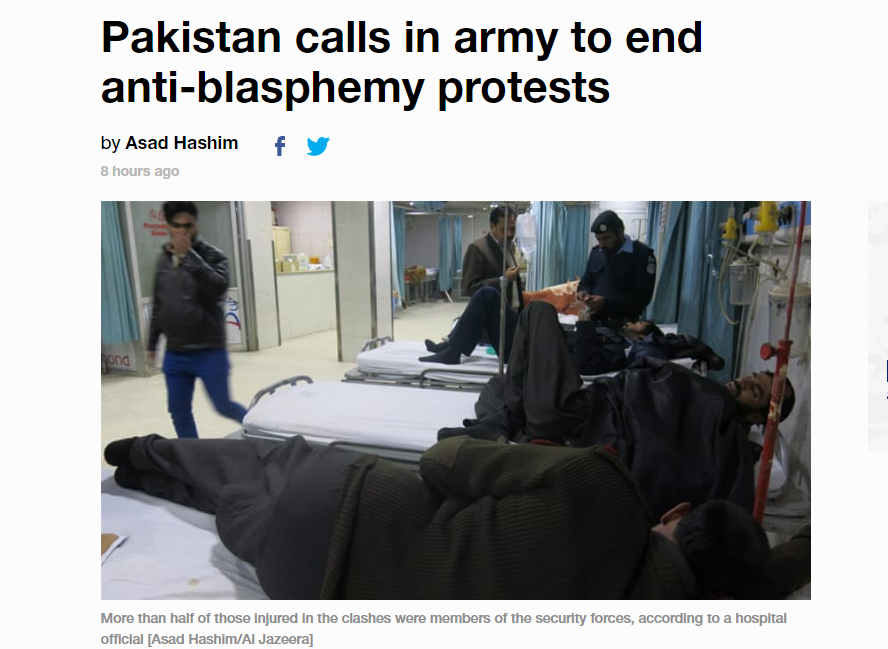 “The Pakistani army has been called in to restore order to the capital after clashes between anti-blasphemy protesters and police left at least 174 people injured.

Thousands of riot police and paramilitary personnel on Saturday fired tear gas, rubber bullets and water cannon at the protesters in an attempt to dislodge them from a major highway into Islamabad.

The protesters, numbering as many as 2,000, stood their ground, fighting back by throwing stones and beating police with sticks and metal rods in running battles that continued throughout the day.” 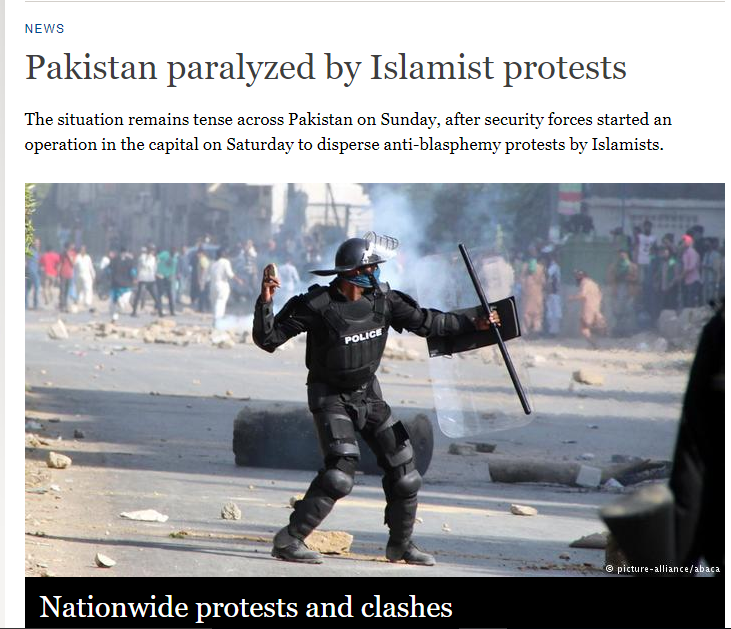 Germany’s DW headlined the news as “Pakistan paralyzed by Islamist protests,” and wrote:

“There have been several fatalities and scores of people have been injured in clashes between the protesters and security forces in Islamabad on Saturday. In the southern city Karachi at least 27 people were injured in clashes. Protests also led to the closure of the main road in Lahore. The developments have paralyzed everyday life major cities with violence erupting in 9 cities across the country.

On Saturday, some 8,500 armed security personnel confronted Islamists, who responded by blocking roads, throwing stones and setting vehicles alight. Security forces fired tear gas and rubber bullets. They were unable to gain control over the situation which led to the government requesting military assistance. There has been no official response from the army.” 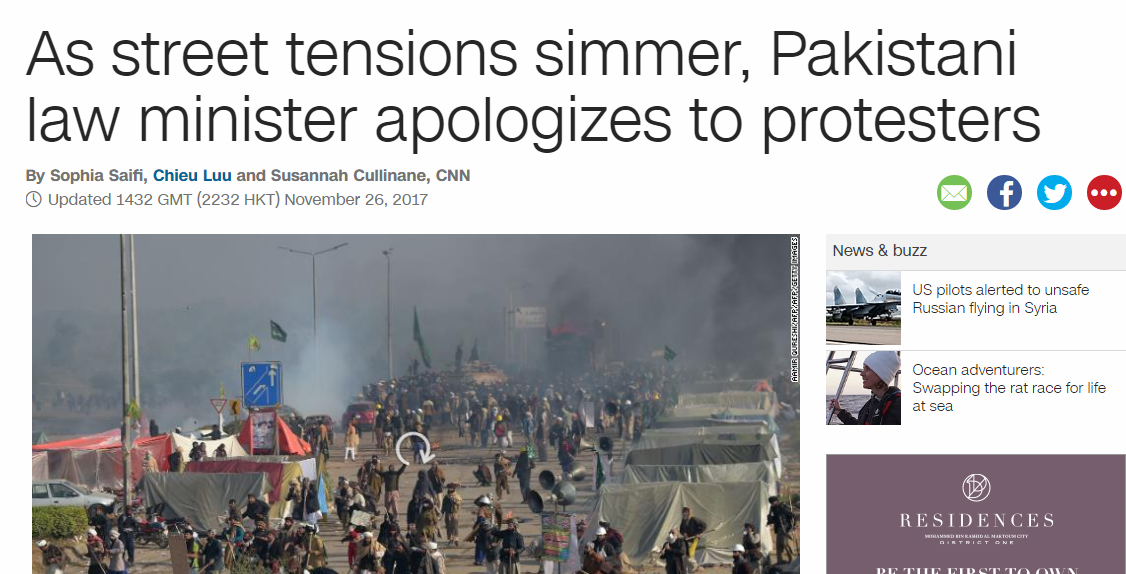 “Pakistan’s Law Minister Zahid Hamid apologized to protesters Sunday for provoking outrage and he assured the nation he believes in the finality of the Prophet Muhammad.

The apology came as Pakistani forces moved against protesters blocking a key road in the capital Sunday after demonstrators attacked a police checkpoint, state media reported.

The Pakistan Rangers have taken a position close to the Faizabad sit-in in Islamabad after protesters set ablaze a car and four motorbikes, witnesses said.

The Rangers are an armed paramilitary force under the command of Pakistan’s military.

At least two people have died and more than 250 others been injured in street demonstrations, according to hospital officials.” 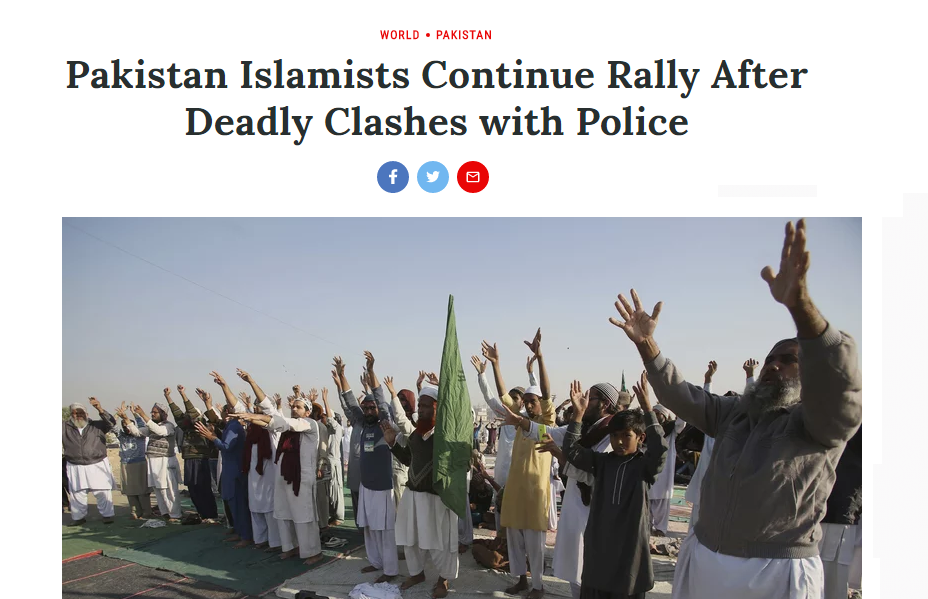 The globally recognized Time, in an article with a headline “Pakistan Islamists Continue Rally After Deadly Clashes with Police,” wrote:

“Pakistani Islamists pressed ahead with their rally near Islamabad in even larger numbers on Sunday, a day after clashes with police left six dead and dozens wounded.

On Saturday, security forces failed to disperse the protesters when riot police moved in with tear gas and batons. Hospital officials said nearly 200 people were hurt, most of them policemen. They confirmed six people were killed in clashes with police at the Islamabad rally.

The government asked the army for help but the military questioned the need for army troops, saying enough police and paramilitary troops were available. Army chief Gen. Qamar Javed Bajwa on Sunday met with Prime Minister Shahid Khaqan Abbasi to discuss the situation.” 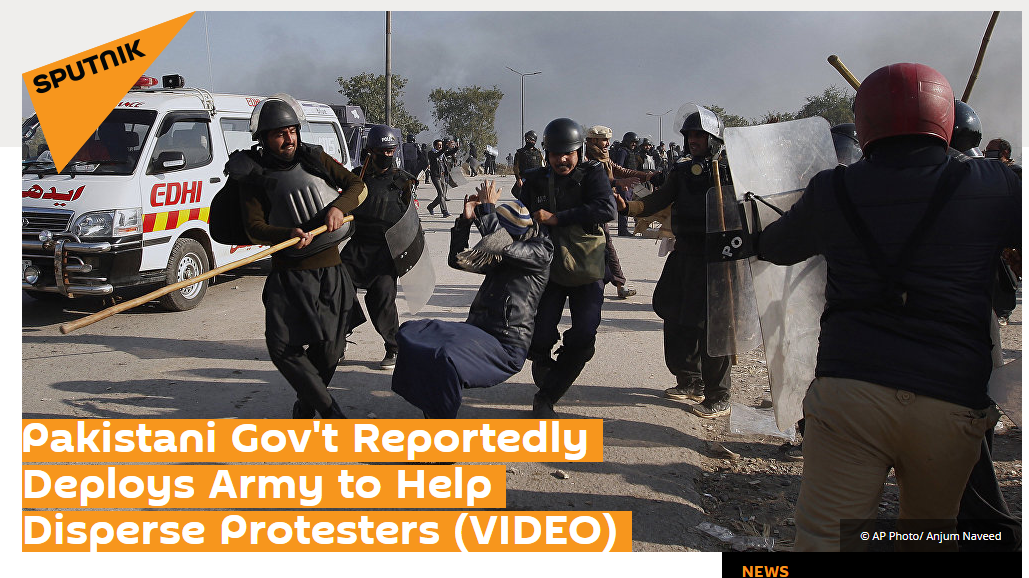 “At least 200 people have reportedly been injured and a police officer has died as a result of clashes between protesters and security forces in the Pakistani capital as security forces launched an operation to clear an almost three weeks long sit-in by religious groups.

The Pakistani government has decided to summon army forces to country’s capital Islamabad to establish order in the city following weeks of unrest caused by protesters opposing an amendment to election act, according to a statement issued on Saturday night.” 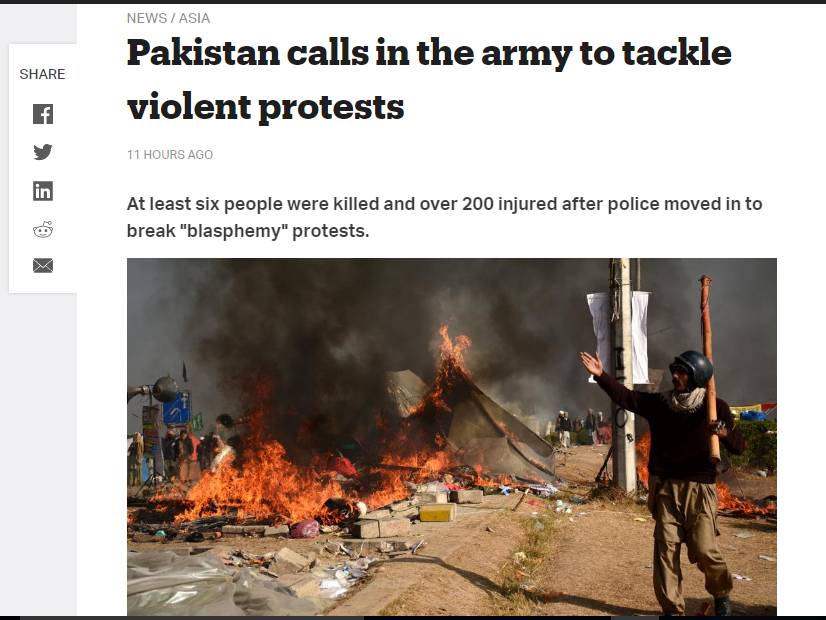 “Pakistan’s government has called in the army to help police and paramilitary forces disperse a protest in Islamabad that killed at least six people and injured 200 more on Saturday.

With the situation turning grim in Islamabad and violence spilling into other cities, the government’s Interior Ministry issued a statement in the evening saying the army has been deployed to “control the law-and-order situation.

Around 150 protesters were arrested since the clashes erupted, the authorities said.” 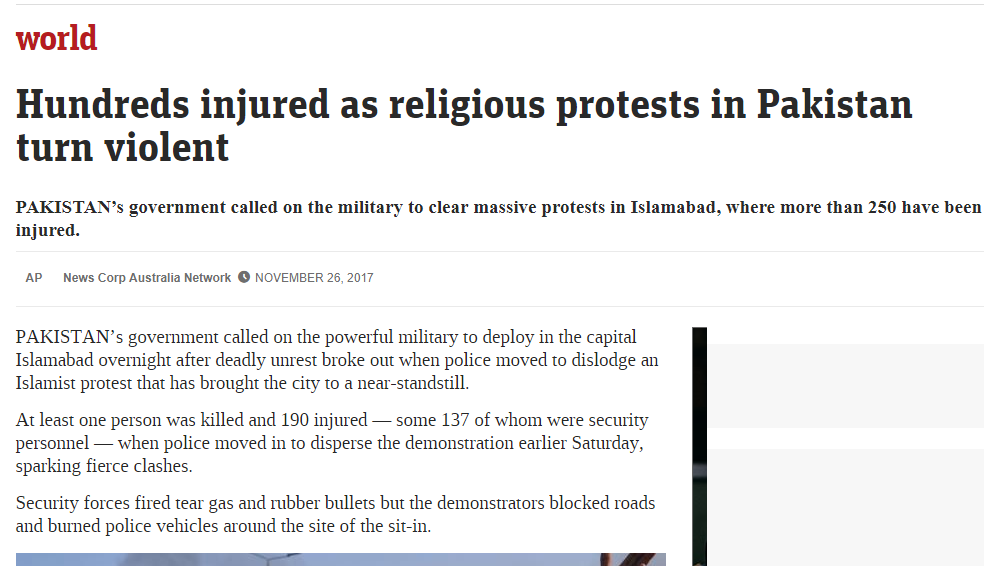 “Pakistan’s government called on the powerful military to deploy in the capital Islamabad overnight after deadly unrest broke out when police moved to dislodge an Islamist protest that has brought the city to a near-standstill.

At least one person was killed and 190 injured — some 137 of whom were security personnel — when police moved in to disperse the demonstration earlier Saturday, sparking fierce clashes.

Security forces fired tear gas and rubber bullets but the demonstrators blocked roads and burned police vehicles around the site of the sit-in.”

“After nearly three weeks of simmering tensions, a 20-day protest finally erupted in violence in the Pakistani capital of Islamabad. Led by Tehreek-e-Labaik Ya Rasool Allah (TLY), protesters blockaded the Faizabad Interchange and demanded the sacking of law minister Zaid Hamid amid accusations of blasphemy. In the ensuing clashes, at least six people have died, 200 have been injured and the government has called in for reinforcements from the army. It is yet another example of how Islamist groups in Pakistan are now bent on exploiting the sectarian fault lines that have existed in the country for a long time for their own political gain.

The TLY, who mostly consist of Barelvi Muslims – a Sunni sect with elements of Sharia and Sufism – was until recently considered a sect that largely believed in mysticism with no inclination for politics. Its members launched the protest after Mr. Hamid was said to be behind a change in the wording of a government oath invoking the Prophet Mohammed. Government officials claimed the amendment was a clerical error and reversed the changes, but the damage was done.”

The website — famous for promoting cricket-related content — also had a crack at the situation in Pakistan. They featured the article as the main headline on their homepage and said:

“The PCB has decided to postpone the semi-finals and final of the National T20 Cup because of the “prevailing situation” of religious unrest in Pakistan, saying new dates would be announced later. The next round of the Quaid-e-Azam trophy has also been called off.

The prevailing situation, as the board called it, began on Saturday, when police attempted to disperse a sit-in by a religious group at an interchange in Rawalpindi. They were unsuccessful in doing so, and the protests spread throughout the country. Educational institutions were closed on Monday and Tuesday in Lahore, where the recent T20Is against Sri Lanka and an ICC-sanctioned World XI took place. Access to social media sites Facebook, Twitter and YouTube was suspended across the country.”