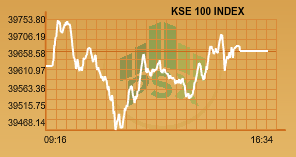 The market opened higher and hit a day’s high of 39760 points during the whole day. The benchmark then spiraled downwards to hit a day’s low of 39,634 near the close of the day.

The index opened in the green and went up to the intraday high of 126 points and saw a loss of -172 points during the intraday. Trading remained dull during midday, as the market was oversold which saw some buying in the last few hours of the session.

Oil prices in the international markets fell on Wednesday as doubts were cast on whether OPEC and Russia would agree on extending cuts in November 30th meeting in Vienna U.S. West Texas Intermediate (WTI) crude futures were at $57.80 a barrel, down 18 cents, or 0.18 percent below their last settlement.

Again, activity was seen in ENGRO which was closed at Rs. 268.51 (+4.22%) as the budding energy conglomerate signed a pact for another LNG terminal.

All shares index had a traded volume of 114 million shares today. Overall, stocks of 336 companies were traded on the exchange, of which 174 gained in value, 140 declined and 22 remained unchanged. In KSE 100, 73.09 million shares were traded with a net worth of just Rs. 5.90 billion. 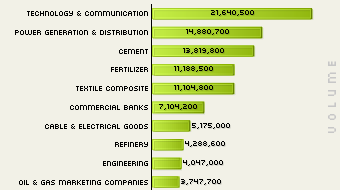 China Financial Futures Exchange Director You Hang said that investors will soon have the opportunity to invest in a Pakistan exchange-traded fund (ETF) in China.

Speaking at the Second Mergers and Acquisitions Conference organised by TerraBiz, Mr You said Chinese shareholders in the PSX want to introduce derivative products in the national equity market.

Mr You said the importance of the PSX in the wake of the China-Pakistan Economic Corridor (CPEC) has increased as a major avenue for raising money for development projects.