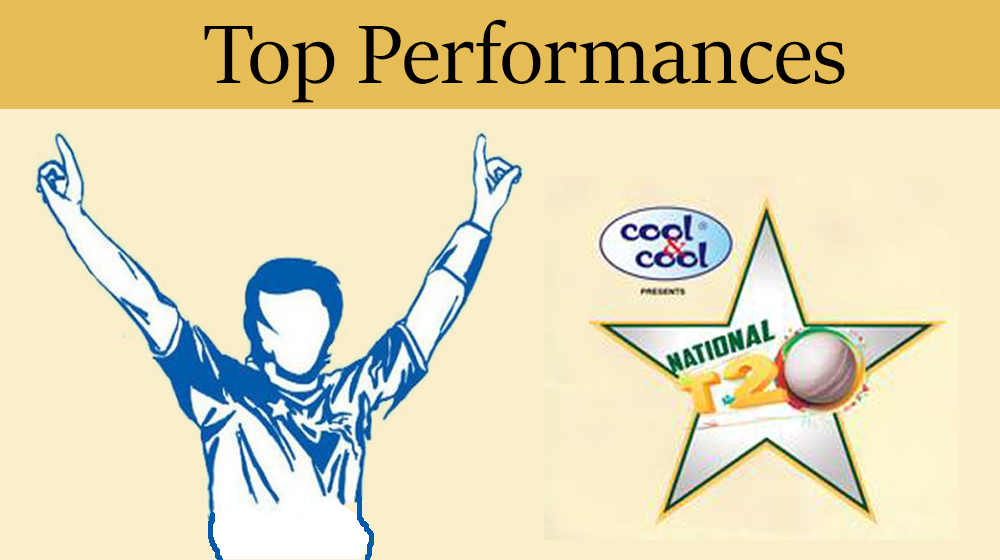 Pakistan’s domestic T20 tournament was in full blitz a few days and we saw some brilliant performances this year. Both, the veteran cricketers and the emerging stars, have played crucial roles in their teams’ campaigns, and such performances under pressure bode well, not just for them, but for Pakistan cricket as well.

ProPakistani has compiled the top performances in the National T20 Cup 2017 and this will hopefully help identify some new talent as well.

Chasing 181, Faisalabad’s openers provided a solid start with both openers scoring 70+, making the chase look like a walk in the park. While Sahibzada Farhan’s 76* earned him the man of the match, Gauhar’s quickfire 70 off 35 was the turning point of the game.

Sami Aslam is usually known as a test batsman but he proved everyone wrong during this National T20 Cup. Despite a brilliant 91*, Sami Aslam couldn’t get his team home while chasing 170, falling just 1 run short of the target.

A blistering half-century from the left-handed opener ensured that FATA registered their first win with an enthralling chase.

Shan Masood is another player known for his performances in 5-day cricket. He had a lot to prove and despite his lackluster performances in test cricket, Shan showed his class in T20 format of the game.

An attacking 83 from 52 balls meant that Islamabad posted a challenging total on the board; Islamabad won by 2 runs.

Having to chase 187, it required something special from Faisalabad to get over the line; Sohaib Maqsood ensured that his team galloped to victory with his fiery 80 off 42 which included 7 sixes.

The right-arm pacer took 4-22 to bowl out the opposition for a meagre 116. The match, however, ended in a draw due to rain.

Nasir’s blazing innings of 42, including three sixes, provided Rawalpindi with the right start to chase down 161.

A red-hot 63 off just 29 balls from the the elder Akmal helped his team post 213 for the opposing team to chase.

Asad Shafiq’s smashing innings of 72 won him the Man of the Match award against Rawalpindi.

The opening batsman was in sublime form when he blasted 50 at a strike rate of 227.27.

The young all-rounder Hussain Talat batted brilliantly for his 68 off 46 balls to post 177 for FATA to chase. Islamabad United claim the batsmen will show his true class in the next edition of PSL.

In reply, FATA’s Sohail Akhtar tried his best to get his team home with 74*, but the target was a little too much for him.

First a rapid 85 from Salman Butt and then 4-26 from Umaid Asif helped Lahore Whites down Peshawar with ease.

Sohaib scored another match-winning 87 at 202.32 against Rawalpindi experienced bowling lineup.

Both the players thrashed centuries while playing for opposing teams. FATA won by 19 runs in the end.

First, an unbeaten century from Shan Masood and then a 79 from Ahmed Shehzad provided pure entertainment for the fans. Lahore Blues cruised to victory with ease.

Kamran Akmal smashed 150*, the highest ever in Pakistan’s domestic T20, against Islamabad.

Some strong performances from the youngsters have given them the chance to feature in the PSL 3, considering the fact that the player limit for PSL franchises has been increased from 20 to 21.